Changeling the Lost Open Developmen. Fury: The Scourge. Tagged "Beast: The Primordial" World of Darkness: The Port - Wraith the Oblivion. Changeling: The Lost. [ Lords Of Summer -- Page 151 ] Quote: "Upon my oath, I am become the Old Way; flesh of its flesh and blood of its blood. 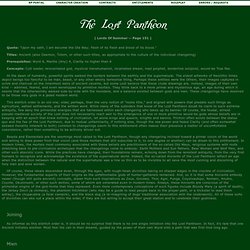 " Titles: Ancient (also Daemon, Totem, or other such titles, as appropriate to the culture of the individual changeling) Prerequisites: Wyrd 6, Mantle (Any) 4, Clarity no higher than 6 Concepts: Cult leader, reincarnated god, mystical transhumanist, incarnated dream, mad prophet, borderline solipsist, would-be True Fae. At the dawn of humanity, powerful spirits walked the borders between the earthly and the supernatural. This eldritch order is an old one; older, perhaps, than the very notion of "noble title," and aligned with powers that predate such things as agriculture, walled settlements, and the written word. Of course, these ideals descended down, through the ages, with rough-hewn divinities taking on sharper edges in the crucible of civilization. Joining Mien. The Reference Desk. S Gateway to the World of Darkness. WOD Vampire The Masquerade Elysium pdf free ebook download from www.xirulen.

Assamites.com. Paths of Enlightenment - The Anarch State. A Path Of Enlightenment is an alternate code of morality to which a vampire subscribes to in an effort to stave off the Beast. 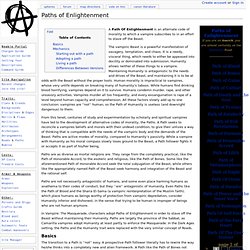 The vampiric Beast is a powerful manifestation of savagery, temptation, and chaos. It is a needy, visceral thing, which needs to either be appeased into docility or dominated into submission. Humanity allows neither of these things to a vampire. Maintaining Humanity is antagonistic to the needs and drives of the Beast, and maintaining it is to be at odds with the Beast without the proper tools. Human morality is impractical to vampires, whose very unlife depends on breaking many of humanity's taboos. From this tenet, centuries of study and experimentation by scholarly and spiritual vampires have led to the development of alternative codes of morality, the Paths.

Paths are as diverse as mortal religions are. In Vampire: The Masquerade, characters adopt Paths of Enlightenment in order to stave off the Beast without maintaining their Humanity. Basics Mechanics. Thaumaturgy. The problem with classifying anything as blood magic is the presentation. 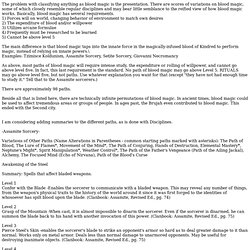 There are scores of variations on blood magic, some of which closely resemble regular disciplines and may bear little semblance to the reified view of how blood magic works. Basically, blood magic has several requirements. 1) Forces will on world, changing behavior of environment to match own desires 2) The expenditure of blood and/or willpower 3) Utilizes arcane formulae 4) Frequently must be researched to be learned 5) Cannot be above level 5 The main difference is that blood magic taps into the innate force in the magically-infused blood of Kindred to perform magic, instead of relying on innate powers.\ Examples: Tzimisce Koldunism, Assamite Sorcery, Setite Sorcery, Giovanni Necromancy As above, most paths of blood magic will require intense study, the expenditure or rolling of willpower, and cannot go above level five.

In fact, this last requirement is the standard. There are approximately 98 paths. 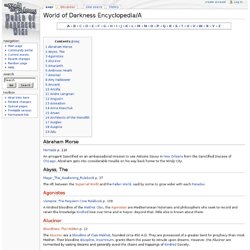 Abraham gets into considerable trouble on his way back home to the Windy City. Abyss, The Mage: The_Awakening Rulebook p. 17 The rift between the Supernal World and the Fallen World , said by some to grow wider with each Paradox . Agonistes Vampire: The Requiem Core Rulebook p. 109 A Kindred bloodline of the Mekhet Clan , the Agonistes are Mediterranean historians and philosophers who seek to record and retain the knowledge Kindred lose over time and in torpor. Alucinor Bloodlines: The Hidden p. 12 The Alucinor are a bloodline of Clan Mekhet , founded circa 450 A.D.