Exalted. Resources-Exalted - OakthorneWiki. From OakthorneWiki Master Exalted Chronicle Timeline [edit] House Rules [edit] Skills & Specialties You may have an unlimited number of specialties, though none can be higher than 3. 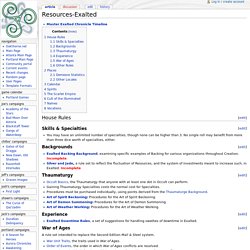 No single roll may benefit from more than three dice worth of specialties, either. [edit] Backgrounds Exalted Backing Background, examining specific examples of Backing for various organizations throughout Creation. [edit] Thaumaturgy Occult Basics, the Thaumaturgy that anyone with at least one dot in Occult can perform. [edit] Experience Exalted Downtime Rules, a set of suggestions for handling swathes of downtime in Exalted. [edit] War of Ages A rule set intended to replace the Second Edition Mail & Steel system. War Unit Traits, the traits used in War of Ages. [edit] Other Rules. Game Universes of Ninja_Sensei - Ninja_Sensei_Gaming. Exalted Quick Reference Cheat Sheet. Anathema: Harmonic Exalted Management.

Exalted: Becoming (a Tutorial for Exalted Second Exition) This is a text-based videogame that teaches you enough of the rules of Exalted to get you started with the tabletop game. 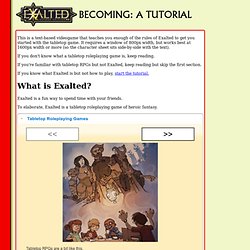 It requires a window of 800px width, but works best at 1600px width or more (so the character sheet sits side-by-side with the text). If you don't know what a tabletop roleplaying game is, keep reading. If you're familiar with tabletop RPGs but not Exalted, keep reading but skip the first section. If you know what Exalted is but not how to play, start the tutorial. Exalted is a fun way to spend time with your friends. To elaborate, Exalted is a tabletop roleplaying game of heroic fantasy.

I'd like to start the tutorial now. I'm done with the tutorial and would like to read more Certainly. Who are you and why did you do this? My name is Jye Nicolson aka Mengtzu fka Kasumi. I found myself obliged to improve my Javascript skills, and I've long brooded on Exalted's lack of accessibility. #ExaltedArtwork on deviantART. Deluxe Exalted 3rd Edition by Richard Thomas. This is the tale of a forgotten age before the seas were bent, when the world was flat and floated atop a sea of chaos. 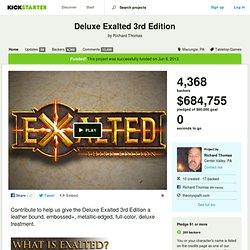 This is the tale of a decadent empire raised up on the bones of the fallen Golden Age, whose splendor it faintly echoed but could not match. This is a tale of primal frontiers, of the restless dead, of jeweled cities ruled openly by spirits in defiance of Heaven’s law. This is a tale of glorious heroes blessed by the gods, and of their passions and the wars they waged in the final era of legends. This is your tale. This is Exalted. For a basic Introduction to Exalted please check out this link: For an overview of the EX3 Mechanics please check out this link: Exalted is a popular role-playing game that debuted in 2001 from White Wolf Publishing. Drawing inspiration from legendary writers like Robert E. Now, White Wolf and Onyx Path want to revive and refresh the entire game line with the help of a few familiar faces. . • New! • New! • New! • New! WelcomeToExaltedWiki - Exalted - Unofficial Wiki. From Exalted - Unofficial Wiki New here? 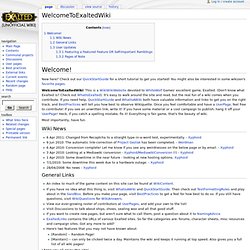 Check out our QuickStartGuide for a short tutorial to get you started! You might also be interested in some wikizen's favorite pages. WelcomeToExaltedWiki! This is a WikiWikiWebsite devoted to WhiteWolf Games' excellent game, Exalted. Most importantly, have fun. Wiki News 6 Apr 2011: Changed from Recaptcha to a straight type-in-a-word test, experimentally. - Xyphoid 9 Jun 2010: The automatic link-correction of Project Gezlak has been completed. - Wordman 6 Apr 2010: Conversion complete! General Links An index to much of the game content on this site can be found at WikiContent. I hope you all enjoy this site! User Updates Anyone is allowed to mention a cool wiki node they find here, or a new one they are making. Featuring a Featured Feature OR Self-Important Ramblings 09-02-12: Although this wiki seems to be mostly dead (the most recent page I found was updated in 2011), I and a friend of mine have joined the wiki. Colossus.pdf (application/pdf Object)

Rollenspiele - Exalted - Maps. It's been almost a year. 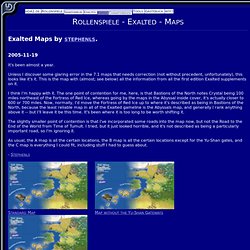 Unless I discover some glaring error in the 7.1 maps that needs correction (not without precedent, unfortunately), this looks like it's it. This is the map with (almost; see below) all the information from all the first edition Exalted supplements on it. I think I'm happy with it. The one point of contention for me, here, is that Bastions of the North notes Crystal being 100 miles northeast of the Fortress of Red Ice, whereas going by the maps in the Abyssal inside cover, it's actually closer to 600 or 700 miles. Now, normally, I'd move the Fortress of Red Ice up to where it's described as being in Bastions of the North, because the least reliable map in all of the Exalted gameline is the Abyssals map, and generally I rank anything above it -- but I'll leave it be this time.

The slightly smaller point of contention is that I've incorporated some roads into the map now, but not the Road to the End of the World from Time of Tumult. . - Stephenls Um. Exalted on #UdonCrew - deviantART.