Get best residential/commercial property/land investment along with market's best expert supervision with Somani Realtors. We perk up with an active membership holder of CREDAI Bengal and aiming to offer ‘Home for All’. 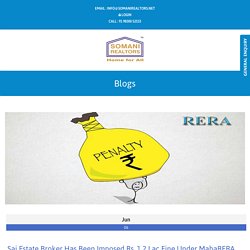 MahaRERA first issued a show-cause notice to the property broker. RERA mandates all the brokers to promote their respective projects after completion of the registration, which is overlooked by the brokerage agency. As per the Act, broker from advertising any project for marketing, booking, and selling apartments in any project that needs to be registered with the authority. Any kind of violation to RERA is subject to penalty and imprisonment. Delhi Assembly Passes GST Bill, Demands Maximum Tax Sla by SRNN. Delhi Assembly Passes GST Bill, Demands Maximum Tax Slab Of 10% During the debate over GST, Leader of the Opposition Vijender Gupta claimed that as an ex-member of GST council the Deputy CM will always represent and emphasize upon his party’s GST demands rather than condemning the approach. 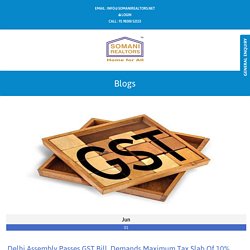 Objecting which Sisodia said that he had been speaking out for the tax rates for quite a while now. GST- Credit Input Might Benefit The Construction Sector by SRNN. GST- Credit Input Might Benefit The Construction Sector In an official statement ICRA declared, “Under the current tax regime the benefit of input tax paid is not fully available, the benefits arising out of input tax credit on the raw materials available under GST regime would result in an overall neutral tax incidence for the construction services.” 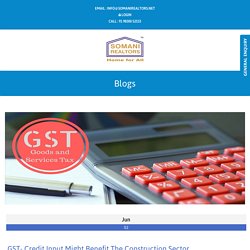 GST rates might increase cost of the properties for infrastructure projects under implementation if there is poor built in crisis and the limited scopes for re-agreement of the contracts, as per ICRA. For the payment of input taxes under GST regime there is credit availability which can counter-balance the higher GST rates. Existing Homebuyers Fear Their Interests Might Be Overl by SRNN. Existing Homebuyers Fear Their Interests Might Be Overlooked Under Government’s RERA Regime Despite union government’s repetitive compulsion states failed to submit their RERA rules by April 30, though RERA came into action on its scheduled time i.e. on May 1, 2017. 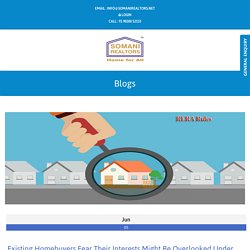 Again the authority gave another 3 months’ period buffer time to the states that have not finalized their rules. Meanwhile, 18 states and UTS have submitted their RERA rules. Karnataka was the first state notifying the draft rules last year. Property Broker To Be Penalized- MahaRERA Serves Its Fi by SRNN. Property Broker To Be Penalized- MahaRERA Serves Its First Notice Sai Estate Consultants- the guilt property broker has been advertising about several residential projects that have not been registered under the Maharashtra Real Estate Regulatory Authority (MahaRERA). 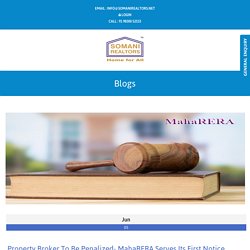 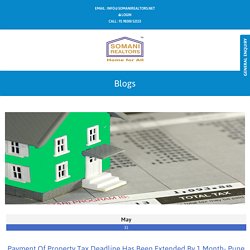 The extended timeline is now June 30, 2017. Through this method the IT department aims to bring more tax payers under the tax liabilities with providing them greater tax relief. However, PMC has been offering tax discount scheme quite a few years now. The proposal to stretch the time limit will help the citizen to gain from their tax payment. Big News For Kolkata Homebuyers Home Price Dropped by 5 by SRNN. 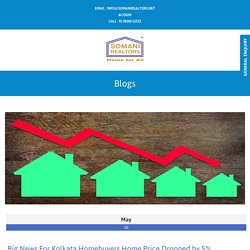 All the efforts are for drawing forth the accountability and transparency to the real estate sector as this sector plays a major role in country’s economy. As we all know most of the states have failed to meet the deadline of RERA implementation on the scheduled day May 1, 2017. Central Buckles Down State RERA Dubiousness by SRNN. Central Buckles Down State RERA Dubiousness Seems like the central government has been watching every footstep of state governments and the government is well-aware of the ambiguity over rules of Real Estate Regulatory Act. 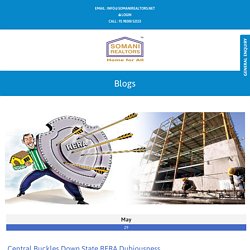 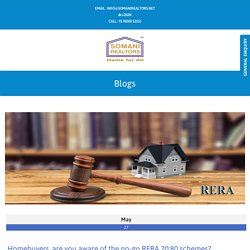 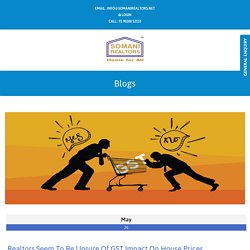 NAREDCO report refers that there will be no remarkable accession in residential property price in India for GST roll out. 400 More Benami Deals, Attached Rs 600-Crore Properties by SRNN. 400 More Benami Deals, Attached Rs 600-Crore Properties Give the one, the other will follow. Seems like benami properties will leave all counts behind. GST Levies Additional 2.5% Tax On Flat’s Maintenance by SRNN. GST Levies Additional 2.5% Tax On Flat’s Maintenance Finance minister Arun Jaitley confirms that GST will come into action July 1 onwards across the country. Under GST purview flats owners have to pay around 2.5% excess tax on the maintenance charges on the residential buildings. Flat owners who pay more above 5000 as maintenance barring the property tax, stamp duty, and electricity and water charges are considered to be charged this additional burden under this fresh tax regime.

The bill was decided on the last day of a special session of the Vidhan Sabha of Maharashtra. CM Devendra Fadavnvis thanked everyone after the bill got passed by the lower house of the state legislature. All present political party members unanimously supported the GST feat. During the three-day special session the legislature discussed and bore out the GST Bill and flagstone country’s GST roll-out started on last Saturday. High Penalty Leverage To The Builders Who Don’t Regis by SRNN. High Penalty Leverage To The Builders Who Don’t Register Within July 31- Maha RERA The latest update comes from the Maharashtra Real Estate Regulatory Authority (RERA) that if builders found defaulting the extended timeline (July 31) to register themselves and their respective projects will likely to be convicted under the central RERA norms and show cause will be issued against them on the basis of online complaints from August 1.

As per the former state government bureaucrat Gautam Chatterjee, who is currently the chairman of the Maharashtra Real Estate Regulatory Authority (RERA), despite the central’s repetitive push, only 9 builders have registered with RERA during last 3 months. Downtime returns slow execution of RERA Developers and real estate agents should be given scheduled time to crosscheck these ‘to be implemented’ rules, be ready with all the required documents well arranged and likewise conquering fear of upload all details online in the public platform.

Expert’s corner. (GST benefits)- Residential Property Price May Slump By by SRNN. Union Government Again Reminds States Not To Dilute RER by SRNN. Plot Promoters Are Now Taken Into The Account Of RERA by SRNN. Maharashtra Approves Rs. 260 Crore For GIS Mapping Of U by SRNN. Homebuyers Seek Extended Deadline Period For Submitting by SRNN. RERA: The new watchdog of Indian realty by SRNN. High Court to crosscheck UP RERA implementation records by EINN. Jharkhand to bring in 2.22 lakh houses under PMAY: Jhar by SRNN. Fear of RERA penalty reaches to the heights among the b by SRNN. Sloth Of The State Governments Delays RERA Implementati by SRNN. UP Won’t Curb RERA, Yogi Vouches NCR Homebuyers by SRNN. Parl Panel Undertakes RERA Dilution By Many States by SRNN.

SBI And The Builders Association Sign a MoU For Easy Ho by SRNN. Even local authorities will be flogged under RERA for p by SRNN. NCDRC: Exclusively registered home buyers’ authority by SRNN. SC: Attest Within 12 Years Or Surrender Your Property T by SRNN. Govt. Aims At Supplying Low-Budget Flats (PMAY) In 15 S by SRNN. Pending Sections of RERA is Now Notified by the Ministr by SRNN.

RERA Website Hasn’t Opened Its Gate For Buyers’ Com by SRNN. Drum Rolls: More Housing Projects Under RERA in Tamil N by SRNN. Experts Say Promoters Can Advertise and Sell In-Progres by SRNN. RERA Won’t Be Able To Castigate Builder For Their Pre by SRNN. 10% Additional Interest To The Buyers Of Delayed Housin by SRNN. UP Won’t Curb RERA, Yogi Vouches NCR Homebuyers by SRNN.

Sloth Of The State Governments Delays RERA Implementati by SRNN. Assured Benefits of RERA: Home-buyers Will Be Utterly P by SRNN. Suffering buyers to understand hitherto RERA benefits by SRNN. Flats Buy Or Sale In Kolkata. Sell and Rent Your Property For Free On somanirealtors.net.