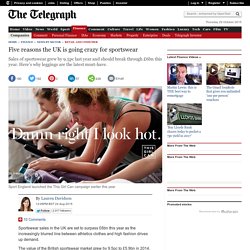 Sportswear has become fashionable Stella McCartney designed the Team GB kit for the 2012 Olympics Perhaps the strongest factor is the rise of "athleisure", or the trend of wearing gym clothes as everyday attire. It was one of the most Googled style terms in 2014 and sales of athleisure items – think yoga leggings that are acceptable to wear outside of the gym – are expected to grow by about 24pc over the next five years.

Key Note attributed this to the increasing number of luxury fashion designers turning their eye to sportswear. "Perfect Body" Ads By Victoria's Secret Cause Outcry Over Body Image Standards. Though the lingerie purveyor isn't known for promoting a variety of body types, a new Victoria's Secret ad featuring the words "The Perfect 'Body'" imposed over an image of 10 skinny models in lingerie has people upset. 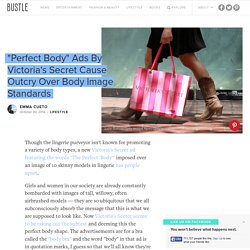 Girls and women in our society are already constantly bombarded with images of tall, willowy, often airbrushed models — they are so ubiquitous that we all subconsciously absorb the message that this is what we are supposed to look like. Now Victoria's Secret seems to be taking out the subtext and deeming this the perfect body shape. The advertisements are for a bra called the "body bra" and the word "body" in that ad is in quotation marks, I guess so that we'll all know they're being tongue in cheek and referring to the bra. Unfortunately for them, it's likely that people who view this ad are not going to take it that way. Wellcoin Lets You Exchange Healthy Living for Gifts. Platform, not gender, drives gamer differences - EEDAR. Historically, video games have been marketed primarily to male players - but gaming has never been a monolithic entity. 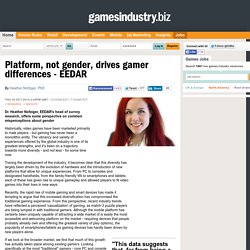 The vibrancy and variety of experiences offered by the global industry is one of its greatest strengths, and it's been on a trajectory towards more diversity - and not less - for some time now. Tracing the development of the industry, it becomes clear that this diversity has largely been driven by the evolution of hardware and the introduction of new platforms that allow for unique experiences. From PC to consoles and designated handhelds, from the family-friendly Wii to smartphones and tablets; each of these has given rise to unique gameplay and allowed players to fit video games into their lives in new ways.

Recently, the rapid rise of mobile gaming and smart devices has made it tempting to argue that this increased diversification has compromised the traditional gaming experience. With this in mind, the market is certainly open to continued growth. More women now play video games than men. Apps most popular format; smartphones most popular device; consoles account for most timeTrivia/word/puzzles are favourite genre – driven by older women Driven by 25-44 year old women downloading free puzzle and trivia game apps, there are now more women playing video games than men, according to a new report from the Internet Advertising Bureau UK (IAB) on the British game-playing audience. 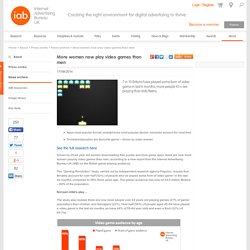 More women now play video games than men. ESA-Essential-Facts-2015. A 12-Year-Old Girl Takes On The Video Game Industry : Planet Money. You have to pay to play as Scarlett Fox, a character in the mobile game Temple Run. 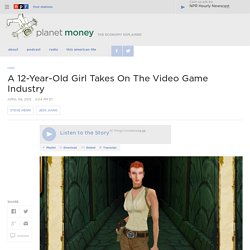 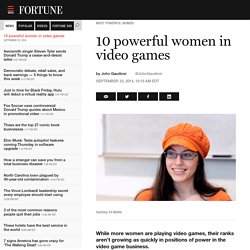 All rights reserved. Fortune.com is a part of the Time.com network of sites. Powered by WordPress.com VIP Email address or Password is incorrect. 52% of gamers are women – but the industry doesn’t know it. A study published on Wednesday by the Internet Advertising Bureau reveals that 52% of the gaming audience is made up of women. 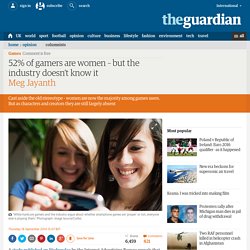 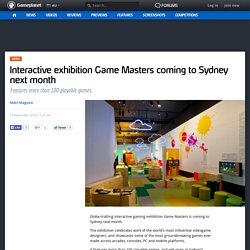 The exhibition celebrates work of the world's most influential videogame designers, and showcases some of the most groundbreaking games ever made across arcades, consoles, PC and mobile platforms. It features more than 100 playable games, and will open at Sydney’s Powerhouse Museum on December 13. “Playful at heart, Game Masters reveals a highly sophisticated, creative and successful industry," said Powerhouse Museum director Rose Hiscock. "The exhibition will inspire curiosity and creativity across generations.” Presented in three sections, Game Masters allows visitors the opportunity to experience their favourite games through both traditional arcade machines and consoles, as well as large-scale interactive displays.

Attendees will also have the opportunity to discover more about game design and development through rare original game artwork, 2D objects, and revealing interviews with game designers. Game Milestones - Installation by The Product in the Computer Game Museum in Berlin #OpenFrameworks #Games. The interactive installation „Game Milestones“ is located in the new permanent exhibition of the Computer Game Museum Berlin. 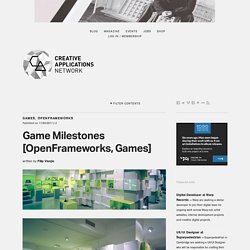 The Earth will spend $91.5B on video games this year. Check out all of our GamesBeat Rewind 2015 end of the year coverage here. 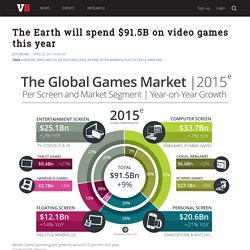 We’re going to spend a great big pile of cash on games in 2015. The global gaming market will reach $91.5 billion this year, according to an upcoming report from research firm Newzoo. That will represent a 9.4 percent increase compared to 2014’s $83.6 billion. Revenues will increase on PCs, consoles, and tablets, and smartphones will lead the way with 21 percent growth year over year.

Spending on PCs and Mac — which includes traditional retail downloads from the Steam digital distribution store as well as free-to-play behemoths like the competitive strategy game League of Legends — will still outpace all other categories. The report also claims that China, already one of the biggest markets for gaming, is about to grow even larger. Countries in the Asia Pacific region will also see some serious growth. The games industry in numbers. Interactive Shop Window "LOOKS" Creative Uses of Stickers in Advertising. Wild Kopi Luwak, True Coffee Flavor of Indonesia. Luwak Coffee or civet coffee comes from Indonesia. It is a coffee processed from the palm civet feces and then to be processed further to produce roasted luwak coffee beans. There are some places in Indonesia produce coffee luwak such as Java, Sumatra, Bali, etc. Wild Kopi Luwak, True Coffee Flavor of Indonesia. FACTY THINGS: 10 FACTS ABOUT INDONESIA. Facty things Published on January 10th, 2014 | by Geckos Tales Team If temples, volcanoes and beaches are your thing ,then travelling in Indonesia is also your thing.

You just might not know it yet. FACTY THINGS: 10 FACTS ABOUT INDONESIA. Hood Branded Environments : Blog. Meet Africa's Nollywood, the world's second largest movie industry. © Time Inc. All rights reserved. 10 Interesting Facts About Nigeria. Nigeria is a country in West Africa having boundaries with Niger and Chad Republic in the north, Cameroon on the eastern part, Benin Republic on the western border and the Atlantic ocean at the southern end.

Nigeria is the most populous country in Africa with more than 160 million people living there. NIGERIA – THE LAND OF ENTREPRENEURS. 32 Riveting Retail Spaces. By: Katherine Vong - Published: Nov 4, 2009. Breaking the Rules of Retail. 20 Examples of Experiential Retail - From Pop-Up Shopping Pods to Augmented Reality Dressing Rooms. By: Alexander Lam - Published: Aug 20, 2013.