Creating a Voice for the 2.4 million Self-Employed Australians and the 8 million in Small Business. Consider these simple Australian statistics: 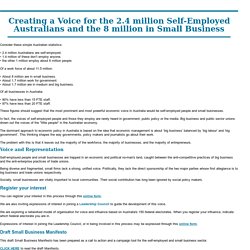 13-24 Year Olds Are Watching More YouTube Than TV. In a rare moment the other day I found myself watching some television during the day for an hour and it was excruciatingly painful. 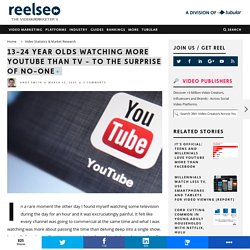 It felt like every channel was going to commercial at the same time and what I was watching was more about passing the time than delving deep into a single show. Photos: Tour the Urban Outfitters Concept Store, Space Ninety 8. Today marks the grand opening of Space Ninety 8, the Urban Outfitters concept store modeled after a similar LA shop—but with a Brooklyn twist. 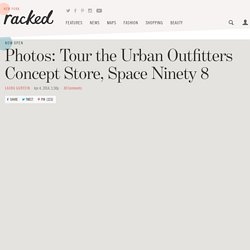 John Hauser, chief officer of brand experience, told us that the design team took advantage of what the old warehouse had to offer in terms of architecture, including brick, exposed wooden beams, and "lots of crazy levels. " Check out our floor-by-floor tour of the new shop after the jump and learn about some pertinent details of each area, like when The Gorbals restaurant is slated to open and which local artisans are featured in the Market Space. Why Pop-up Shops Are the Future of Physical Retail. 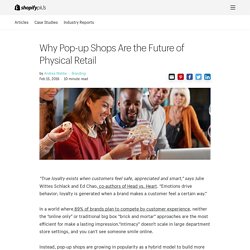 Visitors were able to “lounge in one of five interactive areas that are designed to embody feelings associated with Glade scents,” explains Natalie Tadena in this WSJ.com article. Melissa Gonzalez, founder of the Lion’esque Group, a brand and pop-up specialty firm, warns that you need to provide a unique hook to get people into your pop-up store. And she explains that “brands will have to continue to evolve the hook in what they create in the space, so it doesn’t become cliché.” Australia Population Map Generational Profile2014 McCrindle Research. Post- Architecture injects life into old Fremantle Myer Building with world's largest temporary space activation. The year is 2013 and Australian retail chain giant Myer said goodbye to Fremantle, WA, after 40 years in operation, leaving behind a five-storey masonry shell with two hectares of empty space. 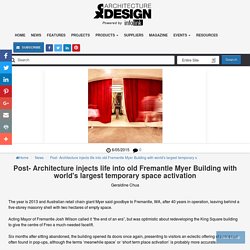 Acting Mayor of Fremantle Josh Wilson called it “the end of an era”, but was optimistic about redeveloping the King Square building to give the centre of Freo a much-needed facelift. Six months after sitting abandoned, the building opened its doors once again, presenting to visitors an eclectic offering of spaces so often found in pop-ups, although the terms ‘meanwhile space’ or ‘short term place activation’ is probably more accurate. “[When Myer exited Fremantle] it left behind, also, the smack of an undesirable place, heaping more vacancy on an already ailing urban scene,” architects from Post- Architecture say of the project, which is in the running for this year’s Australian Institute of Architects’ WA Architecture Awards.

“And then people started squirrelling in and out of the building. International - Log in. Marketing to Millennials: How can government join the party? Posted by Lydia Stevens on in: Blog Content Marketing Have you heard about Millennial Mania? 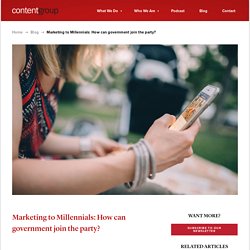 It’s currently dominating the marketing landscape, brands are fixated on it and businesses are obsessing over it, anxiously performing study upon study and survey upon survey in an attempt to determine just what do these millennials want from us?! In the government space, Millennial Mania hasn’t quite hit. In fact, for some government communicators, audience segmentation simply isn’t something that government needs to worry about. As such, they’re manifestly immune to Millennial Mania. Social media exert influence on millennials' shopping habits. Australia in 2020 A Snapshot of the Future. Australia's economy adds 26,100 jobs in March. After disappointing in the three months prior, Australia’s labour market roared back to life in March with employment growth and unemployment both beating expectations. 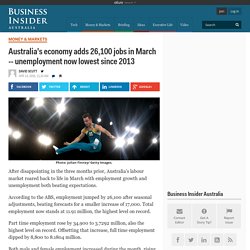 According to the ABS, employment jumped by 26,100 after seasonal adjustments, beating forecasts for a smaller increase of 17,000. Total employment now stands at 11.91 million, the highest level on record. Part time employment rose by 34,900 to 3.7292 million, also the highest level on record. Offsetting that increase, full time employment dipped by 8,800 to 8.1804 million. Both male and female employment increased during the month, rising by 16,325 and 9,748 respectively. Over the past 12 months employment increased by 235,300, equating to a percentage increase of 2.01%. Despite the jump in hiring, hours worked fell by 17.5 million to 1,632.3 million hours after seasonal adjustments. 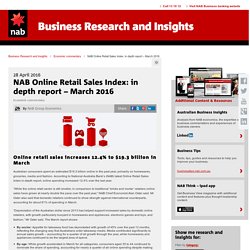 According to National Australia Bank’s (NAB) latest Online Retail Sales Index in-depth report, online spending increased 12.4% over the last year. “While the online retail sector is still smaller, in comparison to traditional ‘bricks and mortar’ retailers online sales have grown at nearly double the pace over the past year,” NAB Chief Economist Alan Oster said. Mr Oster also said that domestic retailers continued to show strength against international counterparts, accounting for about 81% of spending in March. “Depreciation of the Australian dollar since 2013 has helped support increased sales by domestic online retailers, with growth particularly buoyant in homewares and appliances, electronic games and toys, and fashion,” Mr Oster said. For full analysis, download report: Information Is Crucial For Online Australian Shoppers.

Australian shoppers are seeking more information about the products and services they are buying online and are increasingly price savvy. 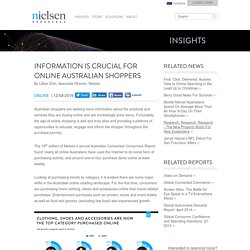 Fortunately, the age of online shopping is well and truly alive and providing a plethora of opportunities to educate, engage and inform the shopper throughout the purchase journey. The 18th edition of Nielsen’s annual Australian Connected Consumers Report found nearly all online Australians have used the Internet to do some form of purchasing activity; and around one-in-four purchase items online at least weekly.

Looking at purchasing trends by category, it is evident there are some major shifts in the Australian online retailing landscape. Information Is Crucial For Online Australian Shoppers. Five retail trends for Australia in 2016 - Retail World Magazine. The Australian retail industry is under significant pressure from consumer-based forces such as increasingly diverse customer segments, the rise of the digital generation and the non-stop customer journey. 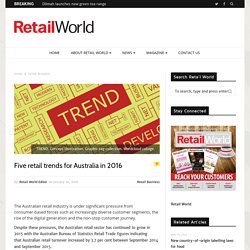 Despite these pressures, the Australian retail sector has continued to grow in 2015 with the Australian Bureau of Statistics Retail Trade figures indicating that Australian retail turnover increased by 3.7 per cent between September 2014 and September 2015. While the growth of the sector is a positive indication of customer sentiment, Australian retailers cannot expect the growth to continue without adapting to an evolving industry. The continued entry of new and non-traditional players will force retailers to change the way they operate and push them to look for new ways to engage with their customers. 12 Retail trends and predictions to watch for.

Australians spend more money on clothes than anyone else in the world. Swipe-happy nation. Statista has ranked the top-spending countries in the world per capita and congratulations to us – we’re number one! The list compares average annual expenditure on apparel per person in nine regions, with Australians forking out US$1,050 (that’s $1,430 at today’s exchange rate). Canada and Japan come in second and third respectively with per person expenditures of US$831 and $814 each year.

Analysts from IBIS World told WWD that Australia “has faced several challenging years, with cautious consumer spending, intense competition and higher rent costs affecting overall revenue and profit.” International - Log in. Australians spend more money on clothes than anyone else in the world. Australia country profile. Australia ranks as one of the best countries to live in the world by international comparisons of wealth, education, health and quality of life.

The sixth-largest country by land mass, its population is comparatively small with most people living around the eastern and south-eastern coastlines. The country's first inhabitants, the Aboriginal people, are believed to have migrated from Asia tens of thousands of years before the arrival of British settlers in 1788. They now make up less than 3% of Australia's 23 million people. Years of mass immigration after the Second World War heralded sweeping demographic changes, making modern Australia one of the world's most multicultural countries. But migration continues to be a sensitive issue politically. In shaping its foreign and economic policy, Australia first looked to Europe and the US but in the last 20 years has developed stronger ties with Asia. Read more country profiles - Profiles by BBC Monitoring Prime Minister: Malcolm Turnbull. World Wealth: Britain crowned fifth richest country in the world behind US, China, Japan and Germany.

London's Bond Street puts UK wealth firmly on the map (Source: Getty) The UK has been crowned the world’s fifth richest country in the world in a new report that measures the total wealth amassed by each country’s individuals. Britain’s population holds $9.24 trillion (£6.01 trillion) in private wealth, surpassing France, Italy, Canada and Australia. This is despite its relatively small population compared with countries such as Germany, which ranked fourth with a total wealth of $9.36 trillion. Australia Economy, Politics and GDP Growth Summary - The Economist Intelligence Unit. Retail Sales in U.S. Decrease to End Weakest Year Since 2009. American Eagle, Urban Outfitters Surge After Topping Estimates. What’s Next for the American Department Store?

Social Media Demographics for Marketers. Marketing to Millennials: 5 Massive Trends That Are Leading the Way. Millennials Infographic. MILLENNIALS BUYING ONLINE INSTEAD OF VISITING STORES, SO RETAILERS USE NEW STRATEGIES TO GET THEM TO VISIT STORES. Bright Sparks: Urban Outfitters. Retail Market Study. A study of the retail space - Stealing Share.