Create a business experience not an event. When Jaguar Land Rover launched the Range Rover Sport, the company invited guests to watch a live film of the up-market vehicle being driven from New York docks to the venue. 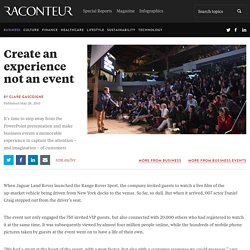 Create a business experience not an event. Economic power of events. When it comes to business events, a fragmented industry has often meant a fragmented presence in the minds of policymakers, government and industry leaders. 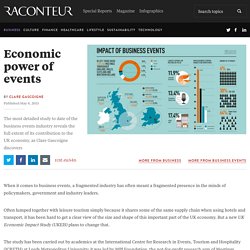 Often lumped together with leisure tourism simply because it shares some of the same supply chain when using hotels and transport, it has been hard to get a clear view of the size and shape of this important part of the UK economy. But a new UK Economic Impact Study (UKEIS) plans to change that. The study has been carried out by academics at the International Centre for Research in Events, Tourism and Hospitality (ICRETH) at Leeds Metropolitan University; it was led by MPI Foundation, the not-for-profit research arm of Meetings Professional International, an industry trade body for the past 30 years. 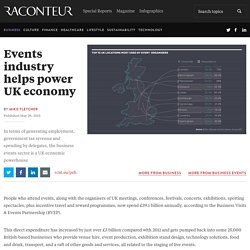 This direct expenditure has increased by just over £3 billion compared with 2011 and gets pumped back into some 25,000 British-based businesses who provide venue hire, event production, exhibition stand design, technology solutions, food and drink, transport, and a raft of other goods and services, all related to the staging of live events. BVEP - Business Visits and Events Partnership - Value of events industry rises 8 per cent to £42.3 billion. 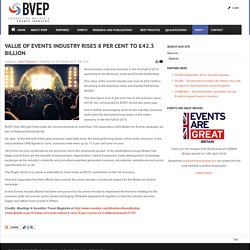 An Introduction To The UK Event Industry In Numbers - Eventbrite UK Blog. [Note: This post was last updated August 2016] Want some fast facts about the events industry in the UK? 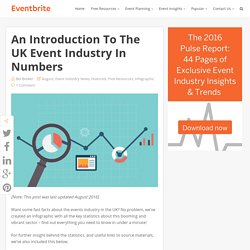 No problem, we’ve created an infographic with all the key statistics about this booming and vibrant sector – find out everything you need to know in under a minute! For further insight behind the statistics, and useful links to source materials, we’ve also included this below. UK Event Industry Facts & Stats What’s the UK events industry worth?

The events sector is worth £42.3 billion to the UK economy in terms of direct spend by event delegates, attendees and organisers, an 8% rise on the previous report. The Value of Britain’s Events Sector – direct spend by segment How many people work in the UK events industry? The Truth About Customer Experience. Companies have long emphasized touchpoints—the many critical moments when customers interact with the organization and its offerings on their way to purchase and after. 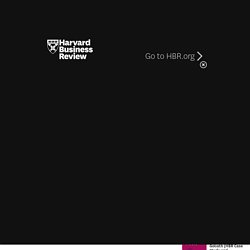 'Customer Experience' Is Today's Business Benchmark. Not so long ago, every business assumed that the keys to success were the highest quality product, the best value for the buck, and the best customer service. 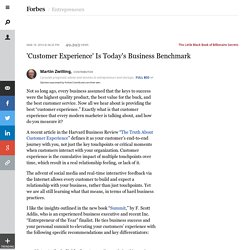 Now all we hear about is providing the best “customer experience.” Exactly what is that customer experience that every modern marketer is talking about, and how do you measure it? A recent article in the Harvard Business Review “The Truth About Customer Experience” defines it as your customer’s end-to-end journey with you, not just the key touchpoints or critical moments when customers interact with your organization. Customer experience is the cumulative impact of multiple touchpoints over time, which result in a real relationship feeling, or lack of it. The advent of social media and real-time interactive feedback via the Internet allows every customer to build and expect a relationship with your business, rather than just touchpoints. Forbes Welcome. Alcoholic Architecture - JWT Intelligence.

A new pop-up bar in London makes imbibing easier than ever. 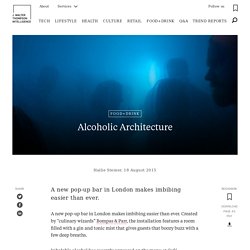 A new pop-up bar in London makes imbibing easier than ever. Created by “culinary wizards” Bompas & Parr, the installation features a room filled with a gin and tonic mist that gives guests that boozy buzz with a few deep breaths. Inhalable alcohol has recently appeared on the menu at Café Artscience and elsewhere, but Bompas & Parr have spent six years developing this new full-room formula for breathable liquor, dubbed Alcoholic Architecture. The future of festivals and experience - JWT Intelligence. In partnership with Hunter Boots’ Festival Summit, The Innovation Group explores the future of festivals and experience culture. 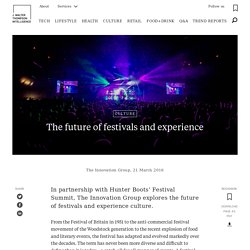 From the Festival of Britain in 1951 to the anti-commercial festival movement of the Woodstock generation to the recent explosion of food and literary events, the festival has adapted and evolved markedly over the decades. The future of festivals and experience - JWT Intelligence. Study: In search of Immersive Experiences - JWT Intelligence. Consumers increasingly want entertainment, narratives and brand experiences to be more enveloping. 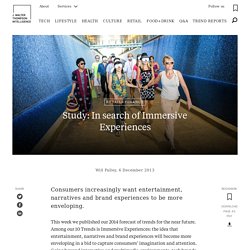 This week we published our 2014 forecast of trends for the near future. Among our 10 Trends is Immersive Experiences: the idea that entertainment, narratives and brand experiences will become more enveloping in a bid to capture consumers’ imagination and attention. Going beyond interactive and multimedia environments, tech brands, retailers, marketers, theater producers and others are creating uniquely immersive experiences that allow participants to leave their “real” world behind. A survey we conducted in November using SONAR™, JWT’s proprietary online tool, found a growing desire and appreciation for Immersive Experiences. Forbes Welcome. Birmingham City University - Sign In. The Lab at Panorama - JWT Intelligence. A new music festival makes space for the emerging stars of experiential tech. TEDx Hollywood - JWT Intelligence.

The future of media, entertainment and movies was naturally front and center at last week’s TEDxHollywood. But the event—which was based on the theme “technology versus humanity”—also touched on bigger issues such as the future of work, education and creativity. In an age where automation, big data, artificial intelligence (AI), virtual reality (VR) and the Internet of Things are not just latent, but manifesting scale, how these technologies will affect everyday life was a pertinent question. TEDx Hollywood - JWT Intelligence. Photoperiod installation at Day for Night Festival by Alex Czetwertynski. Birmingham City University - Sign In. Instagram. UK vinyl sales hit one million for the first time since 1996 - FACT Magazine: Music News, New Music. Over a million vinyl albums have been sold in the UK so far this year – a feat that hasn’t been achieved since 1996. Pink Floyd’s ambient swansong The Endless River is the fastest-selling vinyl release this century, shifting 6,000 copies in its first week of sales, according to new figures from the BPI.

That’s the highest first-week sales of any vinyl album released since 1997, making it the fastest-selling vinyl album this century. The biggest-selling vinyl album of the year remains Arctic Monkeys’ AM (which was in fact released in 2013). The vinyl industry is now worth around £20 million a year, according to the boss of the Official Chart Company, who has revealed that the body will soon launch a weekly vinyl chart. Review: Magic Door. On 27th November, Boxxed took on one of the most mysterious and enchanting events of the month: Magic Door. For someone who hadn’t been to a Magic Door event before, I had no idea what to expect. I had heard the rumours of magic beans and a slide but didn’t really know whether to take this seriously or not.

I mean, a slide, in a warehouse? Magic Door set to return to Birmingham - Events - TheNoiseGate. After a short break from Birmingham, flitting around a few choice festivals, Magic Door returns for their only party of the summer in their home city on Friday 29th July at Lab11. The guys have just got back from hosting their notorious boat party on the glittering Adriatic at Croatia’s Love International with new resident Maxxi Soundsystem headlining – which we must say has been our favourite event of the summer so far!

Looking further ahead to their UK summer session, the party is returning with the unique approach which has made Magic Door one of the country’s most talked about get parties. There aren’t many club nights which don’t exist just on their bookings, for Magic Door is the total opposite, only announcing its guest DJs on the night. It’s an event whose emphasis is always focused on a feast for every sense; secret themes, fancy dress and incredible attention to detail on the production. Character & Moderation - Demos. Executive Summary. Generation Y have Turned their Backs on Alcohol - Demos. Exclusive Demos polling for Character and Moderation: Alcohol paper finds health and money-conscious Millennials are shunning alcohol at unprecedented levels 19 per cent of 16-24s don’t drink, and 66 per cent don’t feel alcohol is important to their social lives 41 per cent of Gen-Y drinkers think alcohol is less important to their own social life than to their parents’ Young people cite growing awareness of health, not being able to afford alcohol, and alcohol being harder to get hold of as key drivers behind their reduced drinking habits The findings suggest a seismic cultural shift in youth drinking habits, and validates official statistics showing young people are drinking less than their counterparts were 10 years ago Exclusive new research from Demos think tank has found that the vast majority of 16-24s either don’t drink (19 per cent) or feel alcohol isn’t important to their social lives (66 per cent).