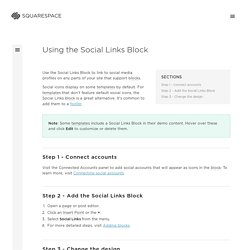 Social icons display on some template s by default. S that don't feature default social icons, the Social Links is a great alternative. Note: Some templates include a Social Links Block in their demo content. Step 1 - Connect accounts Visit the Connected Accounts panel to add social accounts that will appear as icons in the . Open a page or post editor.Click an Insert Point or the +.Select Social Links from the menu.For more detailed steps, visit Adding blocks. 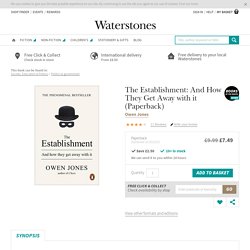 A controversial title, it puts forward a clear and passionate argument making the case for re-examining the British political system. The book, which Armando Iannucci described as “Fantastic, timely, eye-opening', in the New Statesman, puts across the argument that currently, a small group of individuals not only wield the greatest power in Britain, but that they use this power to serve needs that are far from universal. Jones is not suggesting this is "an organised conspiracy", more a deliberate ploy to shape government for the needs of the few. Essentially, as the empowered in society help one another, these mutually beneficial relationships make it very difficult for others to assert themselves or their interests. 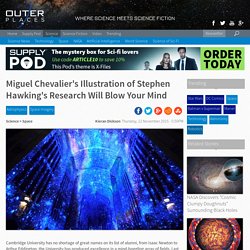 Now, a new study shows that it is actually part of the largest solar system ever discovered, at a trillion kilometers (approx. 621,000,000,000 miles) away from its host star. To put that into perspective, this means that the planet orbits its star at 140 times the distance that Pluto circles our Sun. The previous widest pair of objects, by comparison, were 370,000,000,000 kilometers away from each other. The distance between the planet and its host star is approximately 6,900 times the distance between Earth and the Sun, and one year on that planet would last for almost one million Earth years.

"We can speculate they formed 10 million to 45 million years ago from a filament of gas that pushed them together in the same direction," Dr Murphy said. 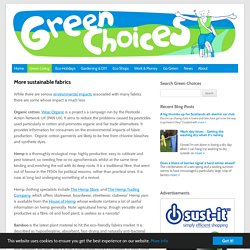 Organic cotton: Wear Organic is a project s a campaign run by the Pesticide Action Network UK (PAN UK). It aims to reduce the problems caused by pesticides used particularly in cotton and promotes organic and fair trade alternatives. It provides information for consumers on the environmental impacts of fabric production.

Organic cotton garments are likely to be free from chlorine bleaches and synthetic dyes. Sustainability. Green Choices - Sustainable fashion & fabrics. Shopping guide to High Street Clothes Shops, from Ethical Consumer. How we rated the companies Cotton sourcing All clothing companies using cotton (almost all do) have been asked for a cotton sourcing policy.Pesticides: Companies receive negative marks under the Pollution & Toxics category if they use conventionally-grown cotton with no plan to reduce pesticide and herbicide use in the near future.GM cotton: Due to its prevalence, companies which have not made a commitment that they will avoid Genetically Modified (GM) cotton receive a mark under the Genetic Engineering column. 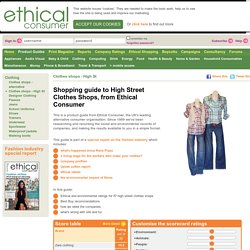 The exception is organically grown cotton which is GM-free.Uzbek cotton: Companies receive a negative mark under the Human Rights category if they have not banned the use of cotton from Uzbekistan in their supply chains. Companies which scored a score of 50 or over in the Cotton Sourcing Snapshot (by Responsible Sourcing Network) receive a positive mark in the Company Ethos category for making solid efforts to keep Uzbek cotton out of their supply chain. Animal rights. Sustainable Goals – Camira Fabrics. Camira Fabrics Training Last week I went on some product training at the Camira fabrics factory in Meltham, Huddersfield. 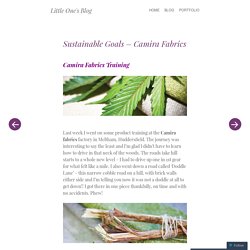 The journey was interesting to say the least and I’m glad I didn’t have to learn how to drive in that neck of the woods. The roads take hill starts to a whole new level – I had to drive up one in 1st gear for what felt like a mile. I also went down a road called ‘Doddle Lane’ – this narrow cobble road on a hill, with brick walls either side and I’m telling you now it was not a doddle at all to get down!!

I got there in one piece thankfully, on time and with no accidents. Vision, mission & values in Sustainable design. British Airways Creates a 'Happiness Blanket' to Help Fliers Sleep. Photograph by Brent MurrayThe blanket's creator, Lorenzo Spadoni British Airways (BAY:LN), the airline that pioneered the flat-bed seats in the 1990s, has taken the business of in-flight sleep to its next (logical? 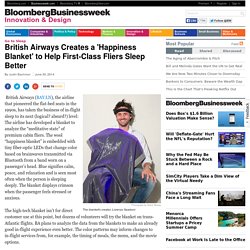 Absurd?) Digital Revolution: Universal Everything. This week we’ve been featuring some of the artists involved in the Barbican’s latest groundbreaking exhibition, ‘Digital Revolution’ which charts the influence of technology on the arts. 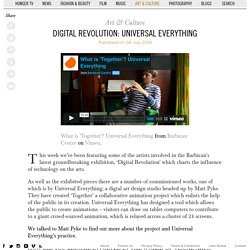 As well as the exhibited pieces there are a number of commissioned works, one of which is by Universal Everything; a digtal art design studio headed up by Matt Pyke. They have created ‘Together’ a collaborative animation project which enlists the help of the public in its creation. Universal Everything has designed a tool which allows the public to create animations – visitors can draw on tablet computers to contribute to a giant crowd-sourced animation, which is relayed across a cluster of 24 screens. We talked to Matt Pyke to find out more about the project and Universal Everything’s practice. I studied botanical and technical illustration followed by graphic design. BBC Democracy Live - 'Empowering young people to engage in politics' Little Girls In Nigeria Have Replaced Barbie With "Queens of Africa" Dolls. The concept for the dolls first began in 2007, when Nigerian entrepreneur Taofick Okoya's daughter told him she wished she was white. 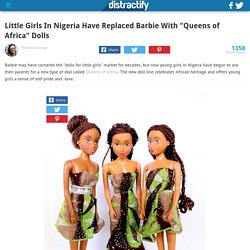 To aid his daughter in loving herself and recognizing the beauty of her own skin, he set out to create dolls that reflected her own appearance. Surprisingly, even in Nigeria (home to the world's largest black population), Okoya had trouble getting toy stores to sell the dolls because "black dolls don't sell. " About Us / Meet the Dolls - Queens Of Africa Dolls. Joshua Light Show + Inherent Vice at the Ace, Shoreditch. A kaleidoscope of swirling, colorful shapes move up, down and around the windows of The 100 Room at Shoreditch’s Ace Hotel. 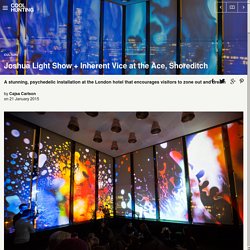 The shapes come together and float apart, creating bubbles and cascading color explosions that look like fungi and haemoglobin, fireworks and underwater flowers. All the while, a suggestive, dreamlike soundtrack sets the mood for the ever-changing color display designed by the Joshua Light Show, the CH favorites who we’ve previously visited in their studio. For the next five days, the public can expect to have their mind blown by the installation at the seventh floor of the Ace Hotel, which is usually only open for private events. The Joshua Light Show, who have been creating psychedelic, analog light shows since 1967, bring their years of expertise to London for the artwork based on the Inherent Vice soundtrack by Radiohead musician and renowned composer Jonny Greenwood. Studio XO suits the future.

TECHCITYINSIDER100: Benjamin Males, co-founder and chief technology officer of wearable tech business Studio XO, is fusing the grey area between science and art with a raft of innovative garments. He tells Andrew Dickens why his company is more than just about designing garments for Lady Gaga. There’s a lot of buzz around the wearable technology industry these days and it’s easy to see why. By 2016, according to a very optimistic Benjamin Males, the booming sector is said to be worth anything up to US$60bn. At Studio XO, the company he co-founded in 2011, Males is the chief technology officer at one of the companies spearheading the growth of wearable tech. Lettuce See the Future: Japanese Farmer Builds... Humans have spent the last 10,000 years mastering agriculture. But a freak summer storm or bad drought can still mar many a well-planted harvest. Not anymore, says Japanese plant physiologist Shigeharu Shimamura, who has moved industrial-scale farming under the roof.

1 / 7 2 / 7 3 / 7 4 / 7 5 / 7 6 / 7 Upon first glance, the new conceptual office by Dutch design firm RAAAF resembles an obstacle course made of concrete blocks; however, the number of professionals sprawled across or leaning against these blocks tapping away on their laptops suggests the real function of the space as an avant-garde reinterpretation of the modern working environment.

Aiming to tackle the myriad health problems — including heart disease and diabetes — associated with sitting in the same position for eight or more hours every day at the typical desk job, the forward-thinkers at RAAAF partnered with the University of Groningen to design the installation that encourages workers to change position several times throughout the day, each time making you put more pressure on your legs. While the installation remains a thought-provoking experiment, furniture makers have already started calling.

Movie: swap streetlights with luminous trees - Daan Roosegaarde. Glowing trees could be used "instead of street lighting" says Daan Roosegaarde Dezeen and MINI Frontiers: Dutch designer Daan Roosegaarde is exploring ways of using the bio-luminescent qualities of jellyfish and mushrooms to create glow-in-the-dark trees that could replace street lights. In this movie filmed at SXSW in Austin, Roosegaarde explains how: "In the last year I really became fond of biomimicry. " "What can we learn from nature and apply to the built environment, to roads, to public spaces, to our urban landscape? " Movie: CuteCircuit on smart textiles and digital fashion. With smart textiles we can "download new colours or patterns" to our clothes.

2014, the year of... gay rights. "I can't change. How the fashion industry affects the bodies of young women. The i-d team defines what beauty means to them. Em-brace your beautiful. Miyanda wears shirt vintage from Six Foot Single. LuminoGlow lingerie wows with the light on and off. WCF:Trends - Activewear Forecast Women + Men SS 2016. Great Report! We are entering into a unique era of style. ISPO Textrend Fall/Winter 2015/2016 Fashion & Textile Trends. ISPO MUNICH is very pleased to have the opportunity to share these visions for Fall/Winter 2015/2016 with the textile industry.

In cooperation with trend experts ISPO MUNICH studied various global trends with influence on the textile industry and its products. ART WEEK 2014. COLOR TRENDS 2016 - Holtermann Design LLC. Predicting colors for 2016 in 2013 is iffy. However, Chelsea Stevenson on Behance gave it a shot and we appreciate the bold analyzes behind her choices. 2014, the year... feminism went viral. On January 3rd of this year, Elle magazine hosted a panel discussing whether or not it was time to "rebrand" feminism. Synthetic biology. Studio Nomad's mirror installation reflects fragments of forest. MoMA acquires first "4D-printed" dress.

Pantone color forecasts: Are they accurate? Edward enninful’s call to the youth of today at last nights BFA’s. Why 2014 is a key year for women's rights and gender equality. YOUR SOCIAL NETWORK AS CURRENCY - Nordic Light Hotel Stockholm. This Luxury Hotel Lets You Stay For Free If You're Popular On Social Media. Global Economic Prospects. 2015 Global Economic Outlook: Better Than 2014—but Not By Much. Economy tracker: Unemployment. NOAA: 2014 is shaping up as hottest year on record. Chantelle winnie proves that what makes you different makes you beautiful. Respect and tolerance key British values, says government. Black Friday: Amazon UK has 'busiest day on record' A Realistic Barbie-Like Doll Now for Sale. Phone Case Turns Your Device into a Polaroid - PSFK. Sounds of Two Eyes Opening.