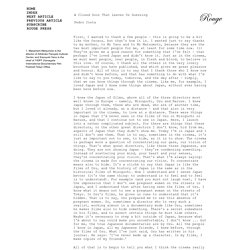 In Memoriam: Raymonde Carasco 1933-2009. On discovering the work of Raymonde Carasco – an exemplary poetic enterprise in contemporary cinema – suddenly it seems that film is at last accomplishing the ideals of German Romanticism. 'If you wish to enter into the depths of the physical', wrote Schlegel, 'you must first be initiated into the mysteries of poetry'. 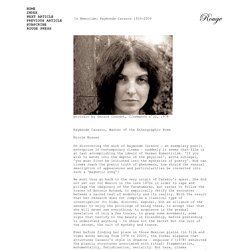 How can cinema reach the poetic truth of phenomena, how should the sensual description of appearances and particularities be converted into such a 'magnetic song'? We must thus go back to the very origin of Carasco's quest. She did not set out for in the late 1970s in order to rape and pillage the imaginary of the Tarahumaras, but rather to follow the traces of Antonin Artaud, to empirically verify the encounter between a sacred text of modernity and its reality. Buster Keaton's "Cops" (1922) "Cops" is a Joseph M. 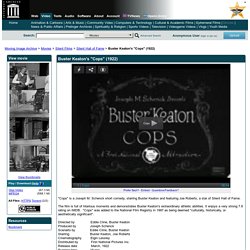 Schenck short comedy, starring Buster Keaton and featuring Joe Roberts, a star of Silent Hall of Fame. The film is full of hilarious moments and demonstrates Buster Keaton's extraordinary athletic abilities. It enjoys a very strong 7.8 rating on IMDB. "Cops" was added to the National Film Registry in 1997 as being deemed "culturally, historically, or aesthetically significant". Directed by Eddie Cline, Buster KeatonProduced by Joseph SchenckScenario by Eddie Cline, Buster Keaton Starring Buster Keaton, Joe RobertsCinematography Elgin LessleyDistributed by First National Pictures Inc.Release date March, 1922Running time 18 min.Country United StatesLanguage Silent film, English intertitles You can see a slideshow of stills from this film and other interesting stuff on our website silent-hall-of-fame.org. Aspen no. 2, item 7: The Young Outs vs The Establishment. Film — The Andromeda of the Arts Lionel Trilling, Author, Critic, Columbia University Professor Ever since its earliest beginnings, the cinema has been thought of as potentially the great art of the future; and as its technical resources have proven, more and more has been. expected of it, once it was liberated. 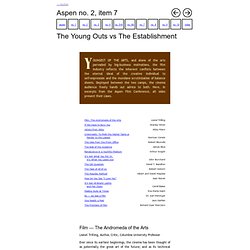 Once it was liberated — for the cinema, if it was ever born free, is everywhere in chains. It is the Andromeda of the arts, and many men of great talent have wished to be its Perseus. Post tenebras lux: materiales para un ensayo. Cineaste Magazine - Articles - <em>Silent Witness</em>: An Interview with Carlos Reygadas. The two features that precede Silent Light (2007) in Carlos Reygadas’s filmography, Japón (2002) and Battle in Heaven (2005), are characterized by flamboyantly enigmatic images of transgressions either sexual or political or, in some cases, both simultaneously. 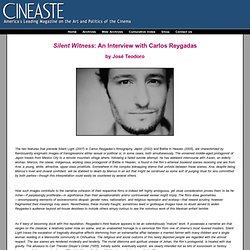 The unnamed middle-aged protagonist of Japón travels from Mexico City to a remote mountain village where, following a failed suicide attempt, he has awkward intercourse with Ascen, an elderly woman. Marcos, the obese, indigenous, working class protagonist of Battle in Heaven, is found in the film’s ethereal bookend scenes receiving oral sex from Ana, a young, white, attractive, upper class prostitute. Imogene Coca. A Lost Comedic Masterpiece from 1984. Nothing Lasts Forever- 1984(unreleased) Things to Look Into: The Cinema of Terrence Malick. Criterion. When Ingmar Bergman died in July 2007—on the same day as Michelangelo Antonioni—an unexpected controversy arose. 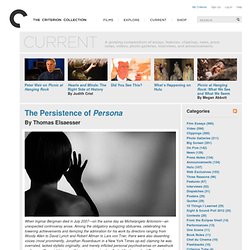 Among the obligatory eulogizing obituaries, celebrating his towering achievements and itemizing the admiration for his work by directors ranging from Woody Allen to David Lynch and Robert Altman to Lars von Trier, there were also dissenting voices (most prominently, Jonathan Rosenbaum in a New York Times op-ed) claiming he was overrated, lacked stylistic originality, and merely inflicted personal psychodramas on awestruck audiences. One might imagine this gainsaying simply reflected the longevity of Bergman’s career and a certain iconoclastic impatience with some of the more predictable hyperbole and praise heaped on the departed.

But in fact it was a repeat performance: controversy over Bergman goes back a long way, and in New York was sparked by no less a film than Persona, his 1966 masterpiece. A Closed Door That Leaves Us Guessing. Poetic License by Joshua Land. Art exists that we may recover the sensation of life....The purpose of art is to impart the sensation of things as they are perceived and not as they are known. 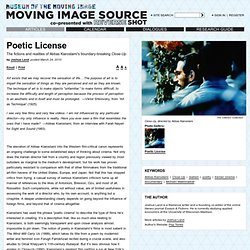 The technique of art is to make objects “unfamiliar,” to make forms difficult, to increase the difficulty and length of perception because the process of perception is an aesthetic end in itself and must be prolonged. —Viktor Shklovsky, from “Art as Technique” (1925) I see very few films and very few videos.

I am not influenced by any particular director—my only influence is reality. Have you ever seen a film that resembles the ones that I have made? Danièle huillet & jean-marie straub — trop tôt, trop tard. Cine.