DNA Dates Dog Domestication Back 33,000 Years. All dogs alive today can trace at least some of their ancestry back to dogs that were domesticated 33,000 years ago in southern East Asia, suggests one of the most extensive ever investigations of canine DNA. 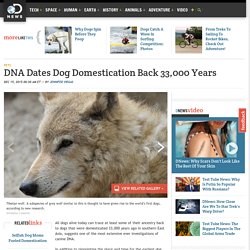 In addition to pinpointing the place and time for the earliest dog domestication, the new study, published in the journal Cell Research, found that the first domesticated dogs descended from grey wolves that likely came from China. NEWS: Wolves Are Kinder, More Tolerant Than Dogs The research, conducted by an international team, further determined that dogs began to migrate out of East Asia and towards the Middle East and Africa 15,000 years ago. Homo naledi: New species of ancient human discovered, claim scientists. A huge haul of bones found in a small, dark chamber at the back of a cave in South Africa may be the remnants of a new species of ancient human relative. 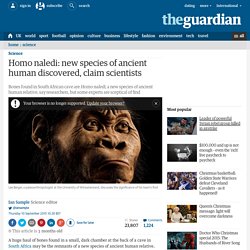 Explorers discovered the bones after squeezing through a fissure high in the rear wall of the Rising Star cave, 50km from Johannesburg, before descending a long, narrow chute to the chamber floor 40 metres beneath the surface. The entrance chute into the Dinaledi chamber is so tight – a mere eight inches wide – that six lightly built female researchers were brought in to excavate the bones. Oldest Human DNA Reveals Mysterious Branch of Humanity. The oldest known human DNA found yet reveals human evolution was even more confusing than thought, researchers say. 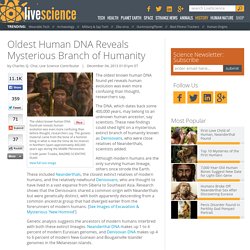 The DNA, which dates back some 400,000 years, may belong to an unknown human ancestor, say scientists. These new findings could shed light on a mysterious extinct branch of humanity known as Denisovans, who were close relatives of Neanderthals, scientists added. Although modern humans are the only surviving human lineage, others once strode the Earth.

These included Neanderthals, the closest extinct relatives of modern humans, and the relatively newfound Denisovans, who are thought to have lived in a vast expanse from Siberia to Southeast Asia. Research shows that the Denisovans shared a common origin with Neanderthals but were genetically distinct, with both apparently descending from a common ancestral group that had diverged earlier from the forerunners of modern humans. Sacrificed Humans Discovered Among Prehistoric Tombs. A prehistoric cemetery containing hundreds of tombs, some of which held sacrificed humans, has been discovered near Mogou village in northwestern China. 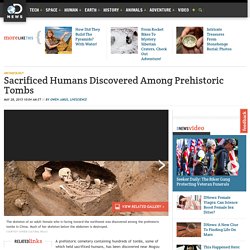 The burials date back around 4,000 years, before writing was developed in the area. In just one archaeological field season — between August and November 2009 — almost 300 tombs were excavated, and hundreds more were found in other seasons conducted between 2008 and 2011. The tombs were dug beneath the surface of the ground and were oriented toward the Northwest. Some of the tombs had small chambers where finely crafted pottery was placed near the deceased. How Homo sapiens became world’s dominant species. View the slideshow No superhero’s origin story is more epic than our own: Some 200,000 years ago, the first modern humans arose in Africa and went on to take over the world. 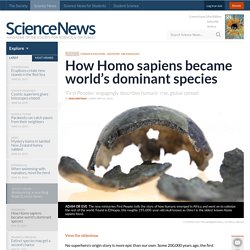 This remarkable feat is chronicled in the series First Peoples, which begins airing on PBS June 24. The series consists of five hour-long episodes that focus on how Homo sapiensemerged in Africa and then spread to Asia, Australia, Europe and the Americas. Ancient Human Fossils found in China Challenge Out-of-Africa Theory. The origin of human beings (anatomically modern Homo sapiens) and their movement across the globe have been fundamental questions in human evolutionary studies for over a century. 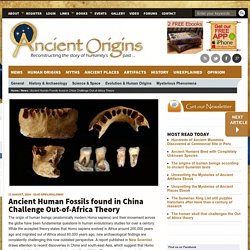 While the accepted theory states that Homo sapiens evolved in Africa around 200,000 years ago and migrated out of Africa about 60,000 years ago, new archaeological findings are consistently challenging this now outdated perspective. A report published in New Scientist draws attention to recent discoveries in China and south-east Asia, which suggest that Homo sapiens inhabited the region long before the Out-of-Africa Theory would have us believe. Skull Fossil Challenges Out-of-Africa Theory. In addition, members of the excavation team have found thousands of plant impressions, carbonized plant remains, numerous animal bones, snail shells, and what appears to be plant pollen in a series of thick lake deposits just to the south of the Dmanisi site. 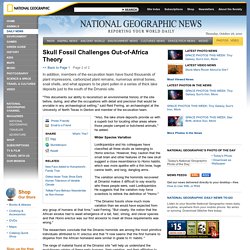 "This documents our ability to reconstruct an environmental history of the site before, during, and after the occupations with detail and precision that would be enviable in any archaeological setting," said Reid Ferring, an archaeologist at the University of North Texas in Denton and member of the excavation team. "Also, the lake shore deposits provide us with a superb tool for locating other areas where those people camped or butchered animals," he added. Wider Species Variation Lordkipanidze and his colleagues have classified all three skulls as belonging to Homo erectus. The variation among the hominids recovered at Dmanisi makes it difficult to say exactly who these people were, said Lordkipanidze.

Problematical theories. Some authors manage to attract attention to their favoured theories while avoiding the scrutiny of academic peer review. 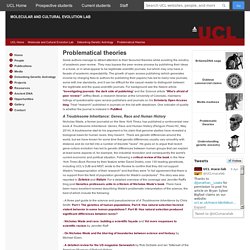 They may bypass the peer review process by publishing their ideas in a book, or in what appear to be legitimate scientific journals, but which may only have a facade of academic respectability. The growth of open access publishing (which generates income by charging fees to authors for publishing their papers) has led to many new journals, some with low standards, and it can be difficult for the casual reader to distinguish between the legitimate and the quasi-scientific journals. For background see the Nature article "Investigating journals: the dark side of publishing" and the Science article "Who's afraid of peer review? " Jeffrey Beall, a research librarian at the University of Colorado, maintains listings of questionable open access publishers and journals on his Scholarly Open Access blog.

Treat "research" published in journals on this list with skepticism. The human skull that challenges the Out of Africa theory. This is the account of the discovery of a skull that has the potential to change what we know about human evolution, and a suppression and cover-up which followed. 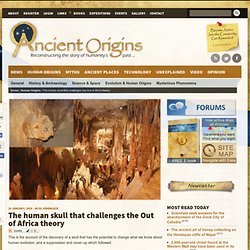 In 1959, in an area called Chalkidiki in Petralona, Northern Greece, a shepherd came across a small opening to a cave, which became visible when a thick covering of snow finally melted. He gathered a group of villagers to help him clear the entrance so they could go inside and explore. They found a cave rich in stalactites and stalagmites. But they also found something surprising – a human skull embedded in the wall (later research also uncovered a huge number of fossils including pre-human species, animal hair, fossilized wood, and stone and bone tools). University of Minnesota Duluth. A graph detailing the origin of modern humans using the Multiregional theory of human evolution. 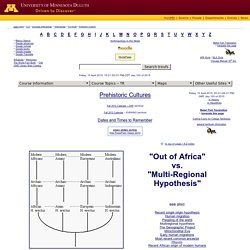 The horizontal lines represent 'multiregional evolution' gene flow betwen regional lineages. Wikipedia. Human prehistory 101 part 1: Out of (eastern) Africa. The Mitochondrial Eve: Have Scientists Found the Mother of Us All? MHRC. In 1987, A world wide survey of human mitochondrial DNA (mtDNA) was published by Cann, Stoneking, and Wilson in Nature magazine. Its main point was that "all mitochondrial DNAs stem from one woman" and that she probably lived around 200,000 years ago in Africa. When the media picked up from Wilson, one of the authors of the paper, that they had found the "Mitochondrial Eve" or "African Eve", the story became a sensation. Have scientists found "the mother of us all"? Most people know about the nuclei of cells and that the genetic inheritance from both parents are found in the nucleus.

Human Migration Map - How We Left Africa. How We Left Africa Someplace in Africa—probably in East Africa near the Rift Valley—modern humans evolved about 200,000 years ago. The population rose and fell, and for one reason or another—perhaps climate changes, perhaps population pressure, perhaps wanderlust—small subsets of the people left to go elsewhere, creating their own groups—or rather our own groups, for these are, after all, our ancestors. Those groups spread in the same way, small subsets of the original groups leaving for greener pastures, sometimes returning and rejoining, sometimes leaving again. Africa has a huge range of environments—deserts, coastal regions, pampas, rivers, lakes, and mountains, and it is certain that some of these required human adaptations—behavioral, cultural and physical—to the demands of the various climates.

Eventually, we left Africa, somewhere between 50,000—100,000 years ago. JOURNEY OF MANKIND - The Peopling of the World. EswarCApap. New analysis shows three human migrations out of Africa. Out of Africa (or not) Human Migration and the Out-of-Africa Theory. Re-Examining the "Out of Africa" Theory and the Origin of Europeoids (Caucasoids) in Light of DNA Genealogy. Bering strait theory, and the Out of Africa model scientific method, not dogma.

The Story of Africa. Out of Africa II Refined. New Evidence Challenges Out of Africa Theory - How Old is Humanity? In the scientific world, nothing is certain. It may seem like some, or even many scientists are staunchly certain about their work, but it’s important to remember that scientists are human, whereas science itself is impartial. If the scientific community had all the answers, it wouldn’t need to keep looking… at anything. That’s kind of the point. In all scientific fields of study there are, of course, many people working on different subfields, different ideas, and different theories. But in each field there is always a standard theory, or model, or timeline, or what have you (we’ll call it a paradigm for brevity’s sake). It’s always important to understand that standard paradigm. ATLANTEAN GARDENS: “Out of Africa” Theory Officially Debunked. DNA Evidence Debunks the "Out-of-Africa" Theory of Human Evolution.

By Steven Strong Contributing Writer for Wake Up World Scientific evidence refuting the theory of modern humanity’s African genesis is common knowledge among those familiar with the most recent scientific papers on the human Genome, Mitochondrial DNA and Y-chromosomes. Regrettably, within mainstream press and academia circles, there seems to be a conspicuous – and dare we say it – deliberate vacuum when it comes to reporting news of these recent studies and their obvious implications. This article was inspired by a comment made recently by Australian historian Greg Jefferys.

So before continuing a scientific assessment of DNA evidence, I will first open this discussion by outlining Greg Jefferys’ comments. The whole ‘Out of Africa’ myth has its roots in the mainstream academic campaign in the 1990′s to remove the concept of Race. It did begin the early 90’s. So how is it that their “probably” has morphed into our collective “definitely”? Noted by Dr. Now the plot thickens and unravels. Massive Genetic Study Supports "Out of Africa" Theory. February 21, 2008 A massive new study of human genetic diversity reveals surprising insights into our species' evolution and migrations—including support for the theory that the first modern humans originated in Africa—scientists said today.

Researchers compared 650,000 genetic markers in nearly a thousand individuals from 51 populations around the globe—an unprecedented level of detail for a human genetic study. "You get less and less variation the further you go from Africa," said Marcus Feldman, an evolutionary biologist at Stanford University in California and a study co-author. A long anthropological debate may be on the cusp of resolution. Clocking the Human Exodus Out of Africa. Evidence Challenges the "Out of Africa" Timeline of Human Evolution. 'Out of Africa' theory of human evolution under fire. RETHINKING "OUT OF AFRICA" What Is the Out of Africa Hypothesis? Origins of Modern Humans: Multiregional or Out of Africa?