6,500 year old burial discovered in Egypt. The rich history of the ancient Nubian Kingdom of Dongola. Following the collapse of the Kingdom of Kush during the 4th century BC, a political vacuum was left in the region it controlled, now modern day Sudan and southern Egypt. 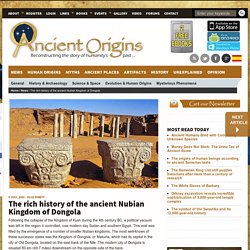 This void was filled by the emergence of a number of smaller Nubian kingdoms. Online Course: Superpowers of the Ancient World: the Near East. This ancient Egyptian practice can cheaply purify dirty water. The seeds of the Moringa oleifera tree have been used to purify water and clean crockery since the days of ancient Egypt, but up until now scientists weren't sure exactly how they worked. 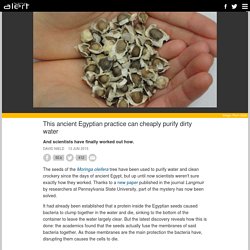 Thanks to a new paper published in the journal Langmuir by researchers at Pennsylvania State University, part of the mystery has now been solved. It had already been established that a protein inside the Egyptian seeds caused bacteria to clump together in the water and die, sinking to the bottom of the container to leave the water largely clear.

9 Engineering Feats Pulled Off by the Ancient Egyptians That Would Be Nearly Impossible for Modern Engineers to Duplicate Today. Eurasian ancestors used Egypt to leave Africa. Study shows that Egypt was ancient route out of Africa and into Eurasia for many non-African populations. 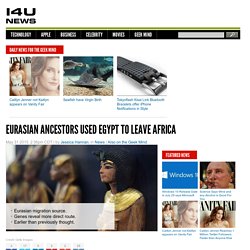 Recent study indicates former theories were not accurate. Lead author Luca Pagani and co-authors published the report in the American Journal of Human Genetics, offering a look into the genome history of modern humans. The expansion occurred around 50,000-100,000 years ago and has remained one of anthropology's central questions. Genetic science holds some answers now. One of the biggest factors indicates northern access (Egypt and Sinai) instead of a presumed southern route (Ethiopia, the Bab el Mandeb strait, and the Arabian Peninsula). Charles Q. But with recent findings pushing the possible movement to around 130,000 years ago, definitive answers became necessary. And history is important when tracing maternal and paternal genetic markers, especially in relation to family histories of disease or illness. Dahshour pyramids: ancient Egypt’s forgotten marvel. Sneferu's Red Pyramid - Photo courtesy of wikipedia CAIRO: Most tourists visiting Egypt think that Giza Pyramids are the oldest, best preserved and largest of Egypt’s some seventy Pyramids. 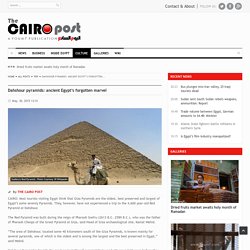 They, however, have not experienced a trip to the 4,600 year-old Red Pyramid at Dahshour. Scientists Just Mummified a Human Leg to Test Ancient Egyptian Techniques. Maat: The Ancient Egyptian Goddess of Truth, Justice and Morality. Maat, also known as Ma’at or Mayet, was a female goddess in the ancient Egyptian religion who represented truth, justice, balance and morality. 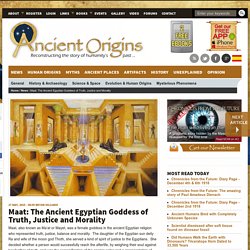 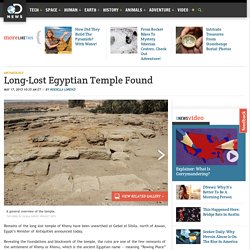 Revealing the foundations and blockwork of the temple, the ruins are one of the few remnants of the settlement of Kheny or Khenu, which is the ancient Egyptian name — meaning “Rowing Place” — for Gebel el-Silsila. Lost Egyptian Temple Ruins Unearthed: Photos The site, located on both banks of the Nile between Edfu and Kom Ombo, was extensively used as a quarry from the New Kingdom until Roman times. “We know that huge quantities of sandstone for temple building were quarried there,” Lund University archaeologist Maria Nilsson, director of the Gebel el Silsila Survey Project, told Discovery News. Pyramids of Meroë stand as Last Remnants of a Powerful Civilization. The Great Pyramids of Giza are among the most recognizable structures in the world today. 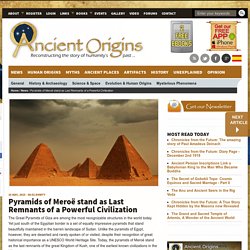 Yet just south of the Egyptian border is a set of equally impressive pyramids that stand beautifully maintained in the barren landscape of Sudan. Unlike the pyramids of Egypt, however, they are deserted and rarely spoken of or visited, despite their recognition of great historical importance as a UNESCO World Heritage Site. Today, the pyramids of Meroë stand as the last remnants of the great Kingdom of Kush, one of the earliest known civilizations in the Nile region. Meroë was an important city in the ancient Kush Kingdom. Ancient Egyptian Temple Found in Sandstone Quarry. (© The Gebel el Silsila Survey Project 2015) ASWAN, EGYPT—A team of archaeologists led by Maria Nilsson of Sweden’s Lund University has unearthed rock inscriptions and cartouches for Amenhotep III and Ramses II at a 3,300-year-old temple site in the Gebel El Silsila quarry. 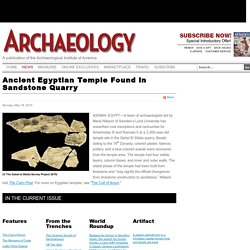 Beads dating to the 18th Dynasty, colored plaster, faience, pottery, and a blue-colored scarab were recovered from the temple area. The temple had four visible layers, column bases, and inner and outer walls. The oldest phase of the temple had been built from limestone and “may signify the official changeover from limestone construction to sandstone,” Nilsson told The Cairo Post. Sibling marriages produced shorter Pharaohs. The height of the pharaohs who ruled ancient Egypt supports historical records that they might have married their sisters and cousins, says new research into 259 mummies. 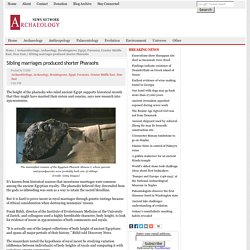 It's known from historical sources that incestuous marriages were common among the ancient Egyptian royalty. The pharaohs believed they descended from the gods so inbreeding was seen as a way to retain the sacred bloodline. But it is hard to prove incest in royal marriages through genetic testings because of ethical consideration when destroying mummies' tissues. Mummy Madness In The Anatomical Record - All Open Access. If you like mummies (and who doesn't like mummies?) 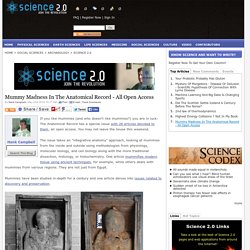 You are in luck: The Anatomical Record has a special issue with 26 articles devoted to them, all open access. You may not leave the house this weekend. The issue takes an "integrative anatomy" approach, looking at mummies from the inside and outside using methodologies from physiology, molecular biology, and cell biology along with the more traditional dissection, histology, or histochemistry. One article mummifies modern tissue using ancient techniques, for example, while others deals with mummies from various regions. Tell Abu al-Kharaz: New Finds from 'Sea People' Settlement. Scientists from the University of Gothenburg, Sweden, say they have unearthed a 3,100-year-old building and a number of artifacts at the archaeological site of Tell Abu al-Kharaz in Jordan. Left: captive Philistine warriors from a wall relief at Medinet Habu, Egypt, 1185-1152 BC. Right: an artist’s conception of a Philistine warrior.

Image credit: John Shumate. Citizenship test quiz: could you become a citizen of ancient Egypt? History, Travel, Arts, Science, People, Places. Ancient Egyptian Soldier's Letter Home Deciphered. A newly deciphered letter home dating back around 1,800 years reveals the pleas of a young Egyptian soldier named Aurelius Polion who was serving, probably as a volunteer, in a Roman legion in Europe. In the letter, written mainly in Greek, Polion tells his family that he is desperate to hear from them and that he is going to request leave to make the long journey home to see them.

Addressed to his mother (a bread seller), sister and brother, part of it reads: "I pray that you are in good health night and day, and I always make obeisance before all the gods on your behalf. I do not cease writing to you, but you do not have me in mind," it reads. [In Photos: Gladiators of the Roman Empire] "I am worried about you because although you received letters from me often, you never wrote back to me so that I may know how you ... " Polion says he has written six letters to his family without response, suggesting some sort of family tensions.

Also near the pyramids they have been excavating a town, located close to a monument dedicated to Queen Khentkawes, possibly a daughter of Menkaure. 4,600-Year-Old Step Pyramid Uncovered in Egypt. TORONTO — Archaeologists working near the ancient settlement of Edfu, in southern Egypt, have uncovered a step pyramid that dates back about 4,600 years, predating the Great Pyramid of Giza by at least a few decades. The step pyramid, which once stood as high as 43 feet (13 meters), is one of seven so-called "provincial" pyramids built by either the pharaoh Huni (reign ca. 2635-2610 B.C.) or Snefru (reign ca. 2610-2590 B.C.). Over time, the step pyramid's stone blocks were pillaged, and the monument was exposed to weathering, so today, it's only about 16 feet (5 m) tall.

Scattered throughout central and southern Egypt, the provincial pyramids are located near major settlements, have no internal chambers and were not intended for burial. Six of the seven pyramids have almost identical dimensions, including the newly uncovered one at Edfu, which is about 60 x 61 feet (18.4 x 18.6 m). Valley of the other kings: Lost dynasty found in Egypt - News - Archaeology. Excavations at Abydos, 70 miles north-west of Egypt's famous Valley of the Kings, have revealed the existence of an entire royal cemetery, now believed to be the final resting place of up to 16 mysterious pharaohs - an entire dynasty whose existence was up till now virtually unknown to the Egyptological world.

Bizarrely more than a century ago, in 1901-1902, a British team, led by the famous Egyptologist, Flinders Petrie, entered four of the tombs - but had no idea as to who they belonged to or even of their high-status. Archaeologists Find Sunken Egyptian City. After more than four years of underwater searching and digging, archaeologists today displayed the remains of a vanished Egyptian city. Archaeologists find remains of previously unknown pharaoh in Egypt. Senebkay: Archaeologists Find ‘Lost’ Pharaoh of Ancient Egypt. U.S. archaeologists digging at Abydos, Egypt say they have discovered the tomb of Woseribre-Senebkay, a previously unknown Egyptian pharaoh who ruled during the Second Intermediate Period, shortly before 1650 BC. Discovery of pharoah Senebkay's tomb could lead to more royal finds. Archaeological Archaeological Discoveries in Egypt.