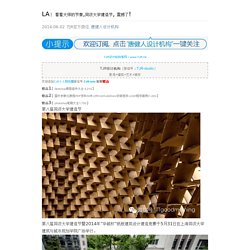 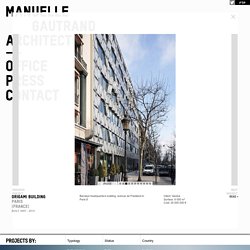 The brief called for an upgrade in two parts: the main building on a 20 meter-wide strip on the avenue, and an extension in the rear, between two courtyard gardens. At ground floor level, the lobby plays on transparency between the street front and the main garden. The building in the rear of the lot is more private, and it is there that the cafeteria and meeting rooms are laid out, with garden space on both sides. On the avenue façade, the architects imagined dressing out the windows with an origami arrangement of marble panels, to express elegance and modernity. 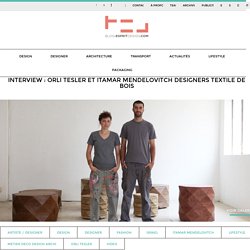 Cardboard furniture. Make your own fold-up furniture with FOLDSCHOOL! foldschool1 – Inhabitots. We love DIY, open source design, especially when it’s great, green design made available to us and our families for FREE! 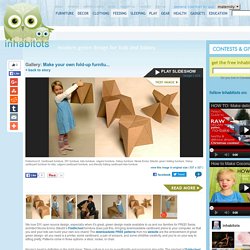 Swiss architect Nicola Enrico Stäubli’s FoldSchool furniture does just this, bringing downloadable cardboard plans to your computer, so that you and your tots can build your own eco chairs! The downloadable FREE patterns from his website are the embodiment of great green design- all you need is a printer, some cardboard, a pair of scissors, and some childlike creativity, and you’re on your way to sitting pretty. Patterns come in three options- a stool, rocker, or chair. Yung Wong's SS14 menswear collection. In the two menswear collections of young fashion designer Yung Wong, dissonance takes center-stage. 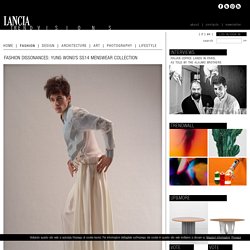 With a mix of contrasting languages and styles: classic yet avant-garde, with mathematical rigor and artisanal warmth. A student at Nottingham Trent University and the recipient of the Avery Dennison Fashion Innovation Award, this young designer from Hong Kong searches for solutions and architectural possibilities that can represent the complexity of dynamism. Inspired by the architecture of Zaha Hadid, Yung Wong's construction purposely disturbs the tranquility of smooth surfaces with tortuous asymmetries and geometric mosaics that evoke vector graphics as they disarticulate onto the fabrics. Thus new shapes are defined, with unstable geometries, in which the whole highlights the fragment. 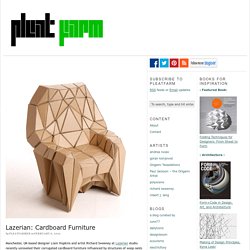 See more of the Bravais armchair and Radiolarian sofa on designboom. for views of the prototypes, click here. Doritos Package Design Concept. This is a pretty nifty Doritos snack packaging concept by Peter Pavlov whose surface triangulations allows for opening and closing without the use of a clip. 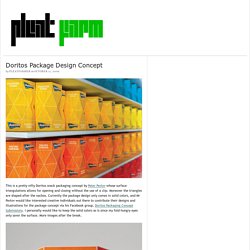 Moreover the triangles are shaped after the nachos. Currently the package design only comes in solid colors, and Mr Pavlov would like interested creative individuals out there to contribute their designs and illustrations for the package concept via his Facebook group, Doritos Packaging Concept Submissions. Pop-up Popcorn Packaging. Packaging your popcorn has never looked this good. 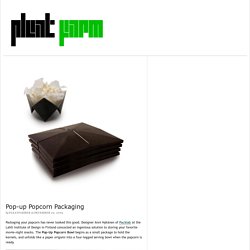 Designer Anni Nykänen of Packlab at the Lahti Institute of Design in Finland concocted an ingenious solution to storing your favorite movie-night snacks. The Pop-Up Popcorn Bowl begins as a small package to hold the kernels, and unfolds like a paper origami into a four-legged serving bowl when the popcorn is ready. images via Packlab. Paper Foldings by Andrea Russo. Italian paper artist Andrea Russo has generated numerous beautifully textural paper foldings that dabble with a van Gogh portrait, some pendant lampshades, origamic cylinders and arm accessories. 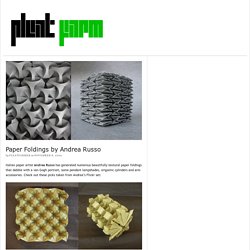 Check out these picks taken from Andrea’s Flickr set: pendant lampshades van Gogh origami portrait You can view Andrea’s extensive portfolio on his Flickr page: Andrea Russo. Rigid Origami // Folding Architecture. I have been recently coming across several examples of origami influenced shapes and even whole projects in architecture. 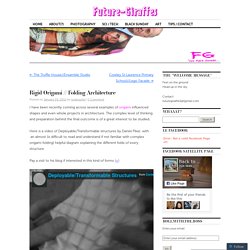 The complex level of thinking and preparation behind the final outcome is of a great interest to be studied. Here is a video of Deployable/Transformable structures by Daniel Piker, with an almost (is difficult to read and understand if not familiar with complex origami folding) helpful diagram explaining the different folds of every structure. Pay a visit to his blog if interested in this kind of forms (+)

Rigid Origami // Folding Architecture. Cardboard Banquet at Cambridge University. The Department of Architecture at the University of Cambridge recently played host to an event called the Cardboard Banquet in which students were asked to design and erect a temporary paper pavilion as part of an architecture studio called Bricolage. The pavilion was made entirely of folded cardboard and assembled within three days, and later followed by a public banquet which was fittingly serenaded by an accordionist. Thanks to Stuart for this update. paper folding studies images via Architecture Review + Iconeye.

BA Final Collections, Fashion, Fashion Show, Graduates. If you see Yuki Hagino’s BA final collection, it’s pretty clear why she’s been receiving praise across the board. The London Evening Standard called her designs “heavenly”, whilst Elle UK say that she “provided one of the standout pieces of the show”. The Business of Fashion cherry picked her as one of the top six CSM designers to watch out for – and for good reason! Having previously studied architecture back in Japan, Yuki has ended her time in fashion knit by presenting a stunning collection of sculptural garments, contrasting hard origami pleats with the softness of cotton.

Could you describe how your previous studies in architecture have influenced your work as a designer? I think the similarity between fashion and architecture is the covering of a human’s body. ‘quattro Festkogl Alm’ by Designliga (DE) ‘quattro Festkogl Alm’ by Designliga Munich-based creative agency Designliga transformed Audi’s legendary quattro drive system into a memorable visitor experience at Obergurgl-Hochgurgl, Austria’s ‘diamond of the Alps’ ski resort. The ‘quattro Festkogl Alm’ opened as a partnership between AUDI AG and Obergurgl-Hochgurgl Ski Lift Company (Liftgesellschaft Obergurgl-Hochgurgl). Says Designliga, “The realization of this architectural metamorphosis begins with a visual impetus arising from the geometrical form of the Audi rings on the parapet and extending throughout the terrace to reach its culmination on the facade. This is clad in faceted matte-finish anodized aluminium, gradually shaded by the design’s featured shade of red from the parapet to the facade wall.

The challenge: creating a one-of-a-kind ensemble using using products familiar to design professionals everywhere. The winner of “Best in Show” and “People’s Choice”: EDA Architects. Created by a team of four designers—Nelson Hansen, Jessica Sluder, Rachel Bergeson, Amanda Jones—from EDA Architects and Megan Fisher, a Treefrog/Chemetal Rep from Midwest Floor Coverings, the winning gown took just under 400 hours (sleep? “We were excited to use natural, raw materials especially after researching Chemetal/Treefrog,” says Rachel Bergeson, Interior Designer. Office Shed in Miniature. In preparation for our upcoming outdoor issue, we've been examining all manners of outbuildings: prefab sheds, tree houses, architectural follies, even chicken coops. The recently introduced Tetra-Shed is a pugnacious contender—it's cute meets cutting edge, with petite proportions and a geometric volume. The modular units, available in the UK as of this month and in the US sometime in the spring, can be customized with two interior linings (birch-faced plywood or plasterboard) and six types of exterior cladding: RAL paint, copper, zinc, Cor-Ten steel, or marine plywood.