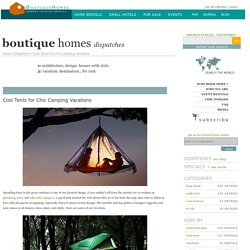 Get our latest discoveries straight to your inbox Spending time in the great outdoors is one of our favorite things, if you couldn't tell from the articles we've written on glamping, tents, and ultra-chic campers. A quick look around the web shows that we're far from the only ones who've fallen in love with all aspects of camping, especially when it comes to tent design. The humble tent has gotten a designer upgrade and now comes in all shapes, sizes, colors, and styles. Here are some of our favorites. This may resemble some sort of hovering alien spacecraft or high-end treehouse, but it's really a tent. As you see here, the Tentsile Stingray tent only gives the illusion of floating above the ground. Want something super luxe? A stay at these deluxe glamping acommodations–no kidding, some of the domes have bathrooms and terraces, and the hotel itself offers a restaurant and bar—includes a number of cool outdoor excursions such as hiking, cycling, and safaris.

Nomadic Resorts' self-sufficient living pod packs luxuries. © Nomadic Resorts There's a certain mystique in the thought of living in nature away from all the urban hustle and bustle in a beautiful nomad's tent. 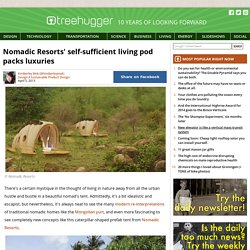 Admittedly, it's a bit idealistic and escapist, but nevertheless, it's always neat to see the many modern re-interpretations of traditional nomadic homes like the Mongolian yurt, and even more fascinating to see completely new concepts like this caterpillar-shaped prefab tent from Nomadic Resorts. Conqueror popup trailer has a place for everything and is ready for anything. Travel trailers offer a lot of lessons for living in small spaces, using fewer resources and creating multifunctional spaces. 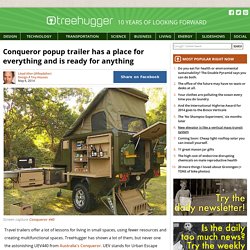 TreeHugger has shown a lot of them, but never one the astonishing UEV440 from Australia's Conqueror. UEV stands for Urban Escape Vehicle but this thing looks like it could go to the moon. ARK NOVA par Anish Kapoor et Arata Isozaki. ARCHITECTURE ET VACANCES #3 - OU COMMENT PARTIR AVEC SA MAISON EN VACANCES ? Lotiron & Pernette Perriand-Barsac. $1000 Egg House on Wheels for a Working Urban Architect. The newly-graduated architect rarely has the luxury of living in an owned home, and may even find their starting salary insufficient to afford a decent apartment within walking (or riding) distance of the office. 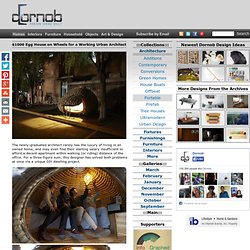 For a three-figure sum, this designer has solved both problems at once via a unique DIY dwelling project. Dai Haifei needed to save money and spent so much time at work anyway, the solution was strange but simple: construct a livable abode that can be wheeled and parked in the empty space right outside of the workplace. Capsule Campers: Mini Mobile Pod Trailers for Urban Travel. SylvanSport Go Camping Trailer : A Comfort Motor Home. Email SylvanSport GO camping and travel trailer will give you the comfort of a motor home while maintaining the simplicity of the tent. 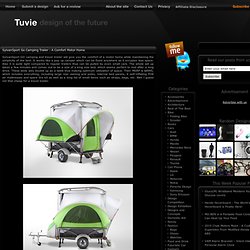 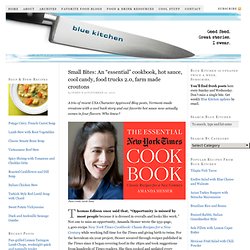 Who knew? Thomas Edison once said that, “Opportunity is missed by most people because it is dressed in overalls and looks like work.” Not one to miss an opportunity, Amanda Hesser wrote the 932-page, 1,400-recipe New York Times Cookbook: Classic Recipes for a New Century while working full time for the Times and giving birth to twins. For the herculean six-year project, Hesser scoured through recipes published in the Times since it began covering food in the 1850s and took suggestions from hundreds of Times readers. She then cooked and updated every recipe that made the cut.

Cologne Design Festival 2009: Passagen: Global Street Food. Posted by Brit Leissler | 23 Jan 2009 | Comments (1) A very intriguing exhibition of the Cologne Passagen was Mike Mike Meires "Global Street Food", showing a great number of various street kitchens from all over the world which were researched and purchased over more than one year. 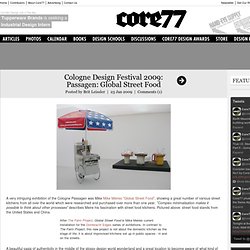 "Complex minimalisation makes it possible to think about other processes" describes Meire his fascination with street food kitchens. Pictured above: street food stands from the United States and China. After The Farm Project, Global Street Food is Mike Meires current installation for the Dornbracht Edges series of exhibitions. In contrast to The Farm Project, this new project is not about the domestic kitchen as the stage of life; it is about improvised kitchens set up in public spaces - in and on the streets. La street food mais pas sur le pouce. 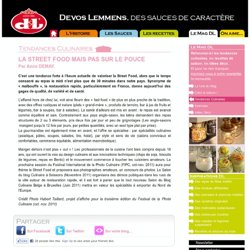 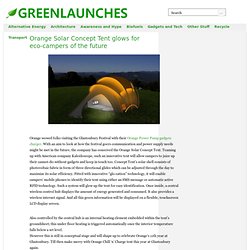 With an aim to look at how the festival goers communication and power supply needs might be met in the future, the company has conceived the Orange Solar Concept Tent. Teaming up with American company Kaleidoscope, such an innovative tent will allow campers to juice up their cannot-do-without gadgets and keep in touch too. Ashton Kutcher's Luxurious Two-Story Trailer. This $2-million luxurious two-Story trailer is a 53ft long, 30-ton luxury home, has two levels with “a second floor that hydraulically emerges from the main body to offer a total floor space of 1,100 sq ft.” 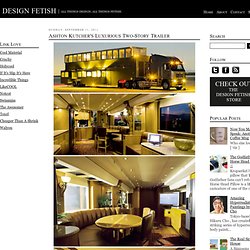