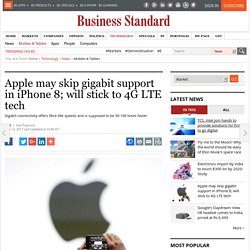 "Apple's decision to leave out the faster gigabit chip found in the competing Galaxy S8 from Samsung could be because of how it sources modems," tech website zdnet.com reported on Monday. Gigabit connectivity offers fibre-like speeds via wireless and is supposed to be 50-100 times faster. Apple has partnered with Qualcomm and Intel for modems, of which only Qualcomm offers a modem which is capable of one-gigabit download speeds. 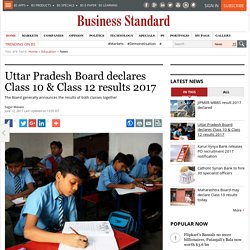 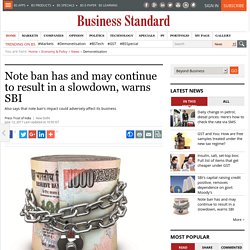 The government had discontinued Rs 500 and Rs 1,000 banknotes from November 9, 2016, and issued new Rs 500 and Rs 2,000 currency notes in exchange for the discontinued ones. The long-term impact of this move on the Indian economy and the banking sector is uncertain, SBI told institutional investors prior to its Rs 15,000-crore share sale through private placement. The effects of India's recent demonetisation decision are uncertain, which may adversely affect the bank's business, results of operations and financial condition, the bank said in the Preliminary Placement Document to investors while flagging the 'risk factors'.

Jio effect? Telecom industry is at its weakest, govt will have to step in. How did it get so bad? 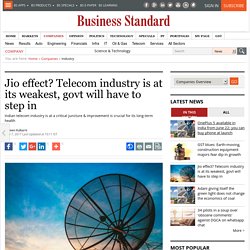 The Indian Telecom sector has been under pressure for the last 8 years because of rising competitive and capex intensity. During this period the contribution of telecom services to GDP has declined from 2% of GDP in FY09 to just 1.2% in FY17. The return ratios for the telecom players has also consistently declined during the period and all the telecom companies do not manage to earn their cost of capital because of continuous investments in spectrum purchases. Uber fires 20 employees, hires Harvard professor to fix leadership crisis. Uber has dismissed more than 20 employees after an internal investigation into workplace harassment and misconduct. 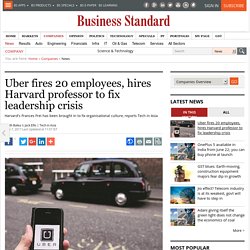 The ongoing probe, conducted by an outside law firm, reviewed 215 human resources claims that relate to discrimination, harassment, and retaliation, among other matters. Aside from the 20-plus dismissals, Uber has also put 31 employees into counselling or training as a result of the investigation, while 7 have received written warnings. A second probe led by a former US attorney general is expected to announce its findings next week. Uber hires Harvard Business School professor to help fix its leadership woes. Federal Bank is scouting for officers and clerks. Federal Bank is looking out for aspirants to team up as officers in scale I grade and clerks. 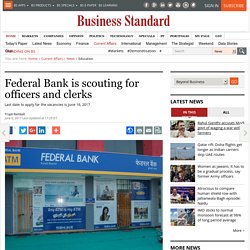 Interested and eligible candidates can apply online only through the bank’s website. Last date to apply for the same is June 16, 2017. Touted as one of India’s leading private sector banks, Federal Bank issued a notification on June 2, 2017 announcing the recruitment drive. Tripura Board of Secondary Education declares class 10 results 2017. The TBSE (Tripura Board of Secondary Education) has announced the results for Class 10 exams (Madhyamik) that happened in March 2017. 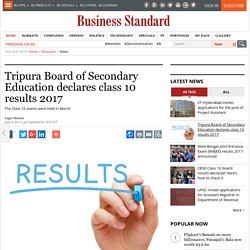 Official sources said a total of about 51,294 students had appeared for the exam in 2017 with the overall passing percentage 66.14% in the last year. The Board conducts Madgyamik Pariksha (Secondary) and Higher Secondary exams. The syllabi of the exam had replaced the old one as per the 2000 year NCF (National Curriculum Framework) from 2006 onward. The Board was established in 1976 with its first Public Examinations such as the old School Final Examination (old system), the new Madhyamik Pariksha system and the old Higher Secondary Examination.

Later in 1978 the new Higher Secondary (+2 stage) Examination was incorporated How to check your results: Now, pay Rs 25 every time you withdraw cash from an SBI ATM, mobile app. While the government is urging citizens to move towards a cashless economy after its mammoth demonetisation drive, the country's largest bank has brought in revised service charges that became effective on Thursday, June 1, 2017. 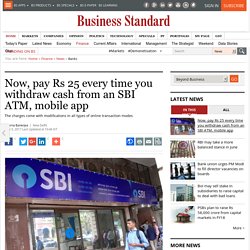 Here are the increased charges you will have to factor in: Oil prices jump after Saudi Arabia and Arab allies cut ties with Qatar. Saudi Arabia and key allies on Monday cut ties with Qatar, accusing it of supporting extremism, sending shockwaves through the energy industry as the countries involved include the world's top oil and liquefied natural gas (LNG) exporters. 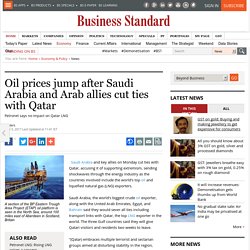 Saudi Arabia, the world's biggest crude oil exporter, along with the United Arab Emirates, Egypt, and Bahrain said they would sever all ties including transport links with Qatar, the top LNG exporter in the world. The three Gulf countries said they will give Qatari visitors and residents two weeks to leave. "(Qatar) embraces multiple terrorist and sectarian groups aimed at disturbing stability in the region, including the Muslim Brotherhood, ISIS (Islamic State) and al-Qaeda, and promotes the message and schemes of these groups through their media constantly," Saudi state news agency SPA said .

Obama slams Trump's withdrawal from Paris accord, says it opened jobs in US. Former US President Barack Obama and other political leaders on Firday slammed Donald Trump's decision to withdraw the US from the historic Paris climate deal, saying he has squandered America's global leadership and put the country with "a small handful of nations that reject the future. 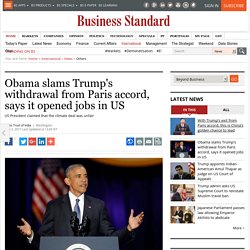 " "The nations that remain in the Paris Agreement will be the nations that reap the benefits in jobs and industries created. I believe the United States of America should be at the front of the pack," Obama said in rare a statement. "But even in the absence of American leadership; even as this administration joins a small handful of nations that reject the future; I'm confident that our states, cities, and businesses will step up and do even more to lead the way, and help protect for future generations the one planet we've got," he said.

He said it was the steady, principled American leadership on the world stage that made the Paris agreement possible. However, not everyone shared the view. Another Ruby Rai? Bihar Class 12 topper can't explain basics of music. Controversies continue to dog Ganesh Kumar, who topped Bihar’s Class XII boards in humanities stream. He can play the drum but is ironically alien to most other musical instruments. He struggled in explaining what are 'sur', 'taal' and 'matra', considered the basics of music. The fraud came to light when he stumbled over questions on music, in which he scored 65 out of 70 in practical and 18 out of 30 in the theory. SBI to offer overdraft facility to 7,00,000 small account holders. Trump has a very honest view of things, I like such people: Vladimir Putin. The President of Russia, Vladimir Putin, on Thursday praised the US President Donald Trump and said he was exactly the kind of person he liked most.

Putin said he had never met Trump but that he agreed relations between their countries had to improve and he was willing to talk with the US leader. "I have to recognize that I love that kind of person. They are simple, direct, they have a very honest view of things and that can be very advantageous," Efe quoted him as saying. I will work for the people, says Nandini: All about the 2016 UPSC topper. Nandini K R, a trainee Indian Revenue Service (IRS) officer, from Karnataka, has topped the Civil Services Examination, the results of which were declared on Wednesday by public service recruiter Union Public Service Commission (UPSC). This is the third time in a row where a woman candidate has topped the examination. IT jobs can be saved if senior executives take pay cuts: Narayana Murthy.

IT companies can protect the jobs of youngsters if senior executives take pay cuts, said Infosys co-founder NR Narayana Murthy. He added that the industry has dealt with the issue several times in the past. Murthy said he has no doubt that all industry leaders have good intentions to solve the problem of layoffs. "There are a lot of smart leaders in the industry, but I have no doubt at all that they are all well-intentioned people and they can find solutions," he told news channel ET Now. Murthy also said this is not for the first time that the industry has faced the layoff problem and hence there should not be any extreme anxiety as the industry had dealt the issue and found solutions then. Nubia N17 mini smartphone to be launched this week: All you need to know. 28 hours a week: Indians spend 7X more time on smartphones than on TV. Indian consumers spend as much as 28 hours a week on their smartphones, seven fold more than the time they end up spending in watching programmes on television as more users access internet on their mobile phone.

How to link your Aadhaar with PAN through just an SMS. Be cautious: China warns Modi on launch of India's longest bridge in Assam. China asked India on Monday to be “cautious” and exercise “restraint” over building infrastructure in Arunachal Pradesh, days after Prime Narendra Modi launched the country’s longest bridge linking Assam with the state claimed by Beijing. “We hope India adopts a cautious and restrained attitude on the issue before the final settlement of the border issue with China to jointly control disputes, safeguard peace and tranquillity in the border areas,” the Chinese foreign ministry said. “China’s position on the eastern section of the Sino-Indian border areas is consistent and clear,” a statement in Chinese said.

Maharashtra HSC board exam results declared. Around 14 lakh students had taken the HSC Board exam in 2016 with 86.60% as total percentage of passing. This year more than 15.05 lakh students appeared for the exams that began on February 28, 2017 and ended on March 25, 2017. Strike today: Chemists down shutters across India, protest e-platform plan. Over 800,000 chemists across the country have decided to shut shop on Tuesday to protest against the government's e-platform plan to regulate the sale of drugs.

Xiaomi Redmi 4 goes on sale at 12 on Amazon: Here's all you need to know. Jio effect: Tata Tele's net worth erodes by Rs 11,650 cr. The woes of Tata Teleservices continue to mount with its net worth eroding by Rs 11,653 crore at the end of the financial year ended March 2017, on rising losses and interest payments. The company announced a loss of Rs 4,617 crore for FY17, compared to a loss of Rs 2,023 crore in FY16. Smartron srt.phone: A fine deal if you are a die-hard Sachin Tendulkar fan. Domestic information technology (IT) start-up Smartron, which counts Indian cricket legend Sachin Ramesh Tendulkar and former Motorola Mobility Chief Executive Sanjay Jha among its investors, recently launched the srt.phone smartphone, “inspired by the dependable traits of Tendulkar”.

At the launch of srt.phone, the company claimed that the smartphone used the best antennas and other security features that made it an all-rounder. You can show facts, but can't call Tharoor names: Delhi HC to Arnab Goswami. It's 'snowing' in Bengaluru.but not the kind you are thinking. Quora - Un lieu pour partager le savoir et mieux comprendre le monde. When Donald Trump pushed aside Montenegro PM, reminded us of Narendra Modi. Salman Khan not worried about Baahubali 2 box office record. You don't have to be a cricket fan to love 'Sachin: A Billion Dreams'

Jio effect? You could soon buy a 4G feature phone only for Rs 1,500. The 2017 agenda: Reliance Jio to soon venture into DTH, broadband services.