Do’s and Don’ts of communicating in uncertain times. Timetable for communicating with employees post-Brexit. Today is the internal communicator’s finest hour. 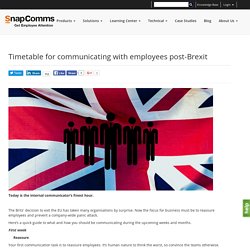 The Brits' decision to exit the EU has taken many organisations by surprise. Now the focus for business must be to reassure employees and prevent a company-wide panic attack. Here’s a quick guide to what and how you should be communicating during the upcoming weeks and months. First week Reassure Your first communication task is to reassure employees. Calm the chaos by reminding them nothing will change immediately. At this stage, it’s impossible to know exactly what you’ll be communicating in the coming months. Push messaging This is the time for top-down communications. Instead, take the lead and deploy specialist employee communication tools.

Internal Audience Needs for News. At some point, you’ve no doubt been taken by surprise when you heard a highly relevant news report about your own employer, client, financial institution or other organization in which you were a stakeholder. 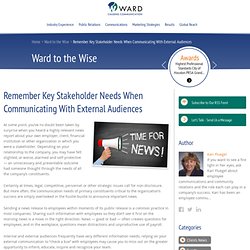 Depending on your relationship to the company, you may have felt slighted, or worse, alarmed and self-protective — an unnecessary and preventable outcome had someone thought through the needs of all the company’s constituents. Certainly at times, legal, competitive, personnel or other strategic issues call for non-disclosure. But more often, the communication needs of primary constituents critical to the organization’s success are simply overlooked in the hustle-bustle to announce important news. Sending a news release to employees within moments of its public release is a common practice in most companies. Sharing such information with employees so they don’t see it first on the morning news is a move in the right direction. Sharing Financial Results Mergers And Acquisitions. Communicating Bad News: How Microsoft's CEO Announced Massive LayoffsPR News. Microsoft CEO Satya Nadella In a memo sent to employees on Thursday, Microsoft CEO Satya Nadella announced the company's largest ever personnel cuts, saying that the company will be shedding up to 18,000 employees over the next year. 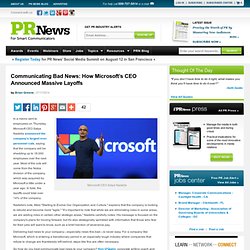 Most of the cuts will come from the Nokia division of the company, which was acquired by Microsoft a little under a year ago. In total, the layoffs could total over 14% of the company. 3 Tips to Deliver Bad News Like a Leader. Clients often come to me when they have to deliver what they considered “bad news” to an employee. 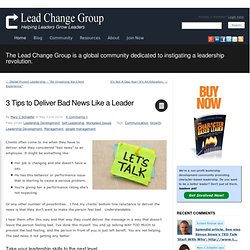 It might be something like: Her job is changing and she doesn’t have a say.He has this behavior or performance issue that is starting to cause a serious problem.You’re giving her a performance rating she’s not expecting. Or any other number of possibilities… I find my clients’ bottom-line reluctance to deliver the news is that they don’t want to make the person feel bad. Understandable. I hear them offer this way and that way they could deliver the message in a way that doesn’t leave the person feeling bad. Your survival guide for Christmas communications.

Your survival guide for Christmas communications At this time of year thoughts begin to turn to Christmas and if they haven’t already, plans start being made as to how to mark it within organisations. 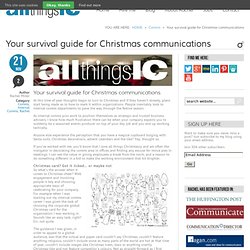 People inevitably look to internal comms departments to pave the way through the festive season. As internal comms pros work to position themselves as strategic and trusted business advisers, I know how much frustration there can be when your company expects you to suddenly be a seasoned events producer on top of your day job and you end up working tactically. Anyone else experience the perception that you have a magical cupboard bulging with Santa suits, Christmas decorations, advent calendars and the like? Yep, thought so. If you’ve worked with me, you’ll know that I love all things Christmassy and am often the instigator in decorating the comms area in offices and finding any excuse for mince pies in meetings.

Christmas card? We're all in this together: engaging employees on sustainability. As sustainability finally starts to make an appearance on chief executives' agendas, and reluctant chief financial officers – hoping that some savings might be on the horizon – set aside funds for sustainability strategies, businesses face the perpetual hurdle of how to transform an elaborate strategy into a carbon-reducing reality. 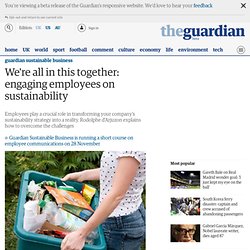 This is where employees come in. Employees are on the frontline of any business. Getting them to do something as simple as putting paper in a recycling bin all adds up when carbon emissions, waste, water consumption or energy use are concerned. But as businesses move beyond the basics, employers need a greater level of commitment from employees: why stop at switching lights off when you could be improving processes, innovating products, and generally making the workplace sustainable? Brand measurement, strategy and design / Business Observer: How to overcome internal dissent. How to overcome internal dissentOriginal article at: Business Observer CEOs are often puzzled when a major new initiative has been announced but doesn’t seem to gain traction within the company. 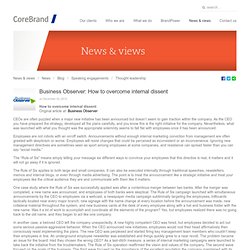 As the CEO you have prepared the strategy, developed all the plans carefully, and you know this is the right initiative for the company. Nevertheless, what was launched with what you thought was the appropriate solemnity seems to fall flat with employees once it has been announced. Employees are not robots with an on/off switch. Announcements without enough internal marketing conviction from management are often greeted with skepticism or worse. The “Rule of Six” means simply telling your message six different ways to convince your employees that this directive is real, it matters and it will not go away if it is ignored.

The Rule of Six applies to both large and small companies. One case study where the Rule of Six was successfully applied was after a contentious merger between two banks.