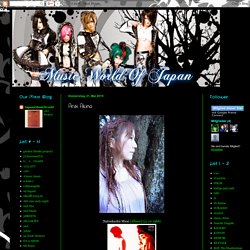 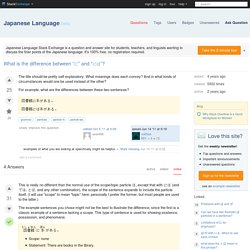 (I will use "scope" to mean "topic" here; personally I prefer the former, but most people are used to the latter.) The example sentences you chose might not be the best to illustrate the difference, since the first is a classic example of a sentence lacking a scope. This type of sentence is used for showing existence, possession, and phenomena: にがある。 Scope: none Statement: There are books in the library. How to "Get Used to" Japanese. 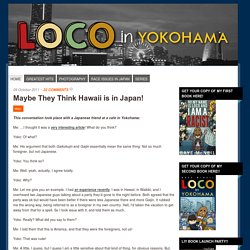 What do you think? Yoko: Of what? Me: His argument that both Gaikokujin and Gaijin essentially mean the same thing: Not so much foreigner, but not-Japanese. Yoko: You think so? 余裕（yoyuu): a unique and useful Japanese word. 余裕（yoyuu) is a great word to learn in Japanese because it has no direct translation to a word in English with the same nuance, and also because you’re likely to hear in in daily life once in awhile. 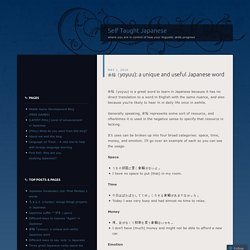 Generally speaking, 余裕 represents some sort of resource, and oftentimes it is used in the negative sense to specify that resource is lacking. It’s uses can be broken up into four broad categories: space, time, money, and emotion. I’ll go over an example of each so you can see the usage. Space. Funny Japanese Prank: Manga Vs Reality (Engsub) Cool Japan Guide (Paperback with Flaps) - Tuttle Publishing. Maybe They Think Hawaii is in Japan!  An Open Letter to Japanese People from Black Men (日本人の皆んなさんへの黒人からの手紙)  The following is a guest post from a fellow black man living in Japan who goes by the name of Miles Star. 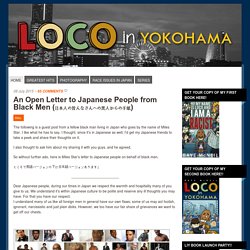 I like what he has to say. I thought, since it’s in Japanese as well, I’d get my Japanese friends to take a peek and share their thoughts on it. I also thought to ask him about my sharing it with you guys, and he agreed. So without further ado, here is Miles Star’s letter to Japanese people on behalf of black men. ところで英語バージョンの下に日本語バージョンあります↓ Dear Japanese people, during our times in Japan we respect the warmth and hospitality many of you give to us. We may choose not to speak up to these microaggressions because we understand many of you are ignorant of their impacts, we may want to maintain peace with you and not sour our friendships with you.

WaniKani Data. WaniKani Timelapse is a menu bar application that generates a visual time-lapse of your kanji learning progress. 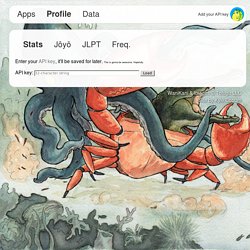 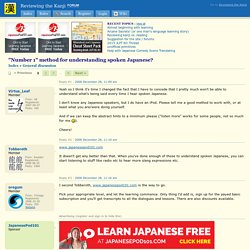 Some of these ideas sound great but I just want to make sure I know exactly what they entail, and if they're definitely the right thing for me before committing myself to a paid subscription or anything. For example, while www.japanesepod101.com is sounding great, I took the tour at the website and it shows some basic written sentences as part of the plan (or this plan used as an example). I have around, I dunno... about 5000 sentences+ in my SRS, have an OK grasp of grammar, so this type of thing wouldn't be much good to me. So... oregum wrote:Pick your appropriate level, and let the learning commence. I'm assuming I could change to an appropriate level. Also, what are the prices etc.? Japanese Grammar Guide. [INTP] Anime Recommendations? - Page 3. Japanese Verb Conjugations-Beginner's Japanese Lesson 4. In this lesson, we will learn how to identify Japanese verbs and how to change them to different forms for different purposes. 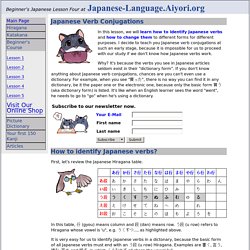 I decide to teach you Japanese verb conjugations at such an early stage, because it is impossible for us to proceed with our study if we don't know how Japanese verbs work. Why? It's because the verbs you see in Japanese articles seldom exist in their "dictionary form". If you don't know anything about Japanese verb conjugations, chances are you can't even use a dictionary. For example, when you see "買った", there is no way you can find it in any dictionary, be it the paper one or the electronic one, because only the basic form 買う (aka dictionary form) is listed. First, let's review the Japanese Hiragana table. In this table, 行 (gyou) means column and 段 (dan) means row. 英和辞典・和英辞典 - Weblio辞書.

Useful Japanese phrases. Tangorin Japanese Dictionary. 鰐蟹. Kaniwani.com/kw/ Multi-lingual language learning and language exchange. Tim Sensei's Corner - Japanese Verbs - Introduction and Table of Contents. Introduction For several years I have been writing tutorials on the Japanese language for relatives and students of the language, and wish to convey my thanks to all those who have given me their compliments and support in making this online version possible. 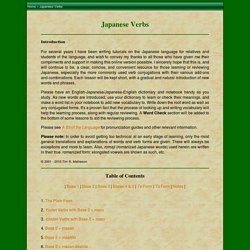 I sincerely hope that this is, and will continue to be, a clear, concise, and convenient resource for those learning or reviewing Japanese, especially the more commonly used verb conjugations with their various add-ons and combinations. Each lesson will be kept short, with a gradual and natural introduction of new words and phrases. Doki doki fm. IMABI. 日本語会話. 日本語テキストの難易度を測る. Japan-related meta REPOSITORY. 木簡画像データベース. Japanese Language School - Study Abroad in Japan - Japanese Language Studies at The Yamasa Institute. NIHONGO eな - Portal for Learning Japanese - General learning sites.