Explore a myriad world of latest smartphones launches that best suit your tastes. View your desired smartphone range right here on our fan page. We bring to you the awesome everything you want to know about your smartphone just before you grab it.

Vivo V5- A Smartphone With Incredible Features - Smartphone Reviews. Vivo is all set to add its latest smartphone to the V-series. 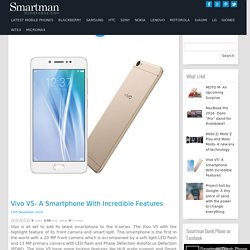 The Vivo V5 with the highlight feature of its front camera and smart split. This smartphone is the first in the world with a 20 MP front camera which is accompanied by a soft light LED flash and 13 MP primary camera with LED flash and Phase Detection Autofocus Detection (PDAF). The Vivo V5 have some touting features like Hi-fi audio support and Smart Split 2.0 which will let the users use two apps simultaneously. So, keep switching from one app to another without any trouble. Vivo V5 has been priced at ₹ 18,980 and will go on sale on 26th November 2016. Further, it is said that the Vivo V5 will come up with 5.2 inches full HD with Corning Gorilla Glass 3 protection and powered by the 1.8GHz Octa-Core Qualcomm Snapdragon 652 processor. Check out the VIVO V5 official TVC: The smartphone will support 4G with VoLTE and have basic connectivity options.

Specifications: Comments comments. MacBook Pro 2016- Does “Pro” stand for Prohibited? - Smartphone Reviews. I use the word “Prohibited” because the all new Apple MacBook Pro starts from ₹ 1,29,000 and goes till ₹ 2,55,000. 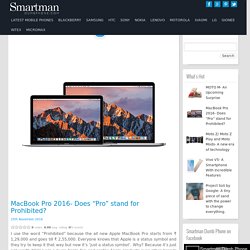 Everyone knows that Apple is a status symbol and they try to keep it that way but now it’s ‘just a status symbol’. Why? Because it’s just not worth it!!!!! I am a huge Apple fan and prefer Apple products over other brands myself but still I think that the new MacBook Pro series is the best example of overpricing. With the most basic specifications, a 13.3” display and no touch bar; the laptop is priced at ₹ 1,29,000. What’s new? There are a few features that are new to the MacBook and the market. The Specs There are two variants of MacBook Pro- 13 inch and 15 inch. Design and Stuff There is good news and bad news, the good news is the new design of MacBook Pro makes it lighter and the keyboard response is even more entertaining.

The Touch Bar is no doubt an amazing piece of tech alloyed with beautiful design. Check this out: Moto Z/ Moto Z Play and Moto Mods- A new era of technology - Smartphone Reviews. Technology has been improving day by day and surprising us with the unique gadgets. 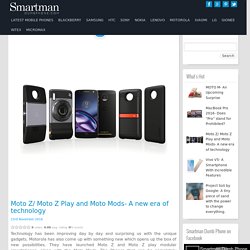 Motorola has also come up with something new which opens up the box of new possibilities. They have launched Moto Z and Moto Z play modular smartphones, along with the Moto Mods. The Phones that can be completely transformed by attaching the three mods; a projector, zoom camera, and JBL sound boost speakers. A great combination of Moto Z/ Moto Z Play + Moto Mods is another example of a new era of technology. The Moto Z has been priced at ₹ 39,999 and the Moto Z Play has been priced at ₹ 24,999 and; are available on Amazon and Flipkart along with its two mods: Hassalebald True Zoom Camera (Moto Mod) and Moto-Insta share projector.

Check this out: Moto Mods are one the way Now sharing streaming shows, movies; presentation and photos from your phone on a big screen or any flat surface up to 70″ screen has become easier with Moto –Insta share projector just by magnetically clicking. Comments comments. Android 6.0 Marshmallow hidden features: Not so hidden any more! - Smartphone Reviews. Every Android update has some features which are hard to know about or is difficult to implement. 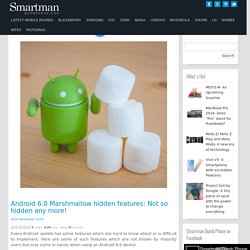 Here are some of such features which are not known by majority users but may come in handy when using an Android 6.0 device 1. Find your device Scared of keeping your phone on silent just because you’ll misplace it? Well, now you can find your phone even on silent mode. 2. It is a feature not many of us know about. 3. Android users always find it difficult to access file manager on their device and tend to download apps for that. 4. It is one of the most useful feature in Android Marshmallow and a must try. 5.

For those who find it difficult to read text on their phones and muddled between the light grey color of text and background can now improve it by just a change in settings. The sharpness of the text can be improved by enabling the High Contrast Text in settings. Google Pixel - A New Beginning. Google being one of the tech giants, always comes up with new features and technology. 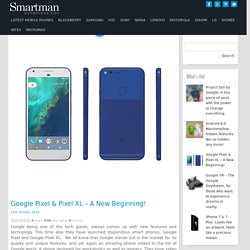 This time also they have launched stupendous smart phones, Google Pixel and Google Pixel XL. We all know that Google stands out in the market for its quality and unique features, and yet again an amazing phone added to the list of Google world. A phone designed for workaholics as well as gamers. They have taken care of every detail, from industrial design to user experience. Google pixel will be soon launched in India too. Smart Pixel features The Google Pixel camera is the best smartphone camera that has been made. Get your Google Assistant Getting your own Google Assistant is so amazing and Google Pixel gives you the chance to have natural conversations to get task done by it. Latest Android The Google Pixel and Pixel XL come with the latest Android operating system, Android 7.1 Nougat. Specification: Comments.