Five Minute Study Guide. As we approach the 200-year anniversary of Jane Austen’s death, it is still difficult to deny that she stands in a league of her own. 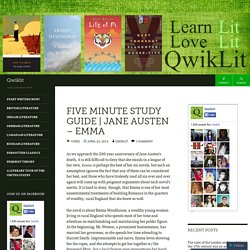 Emma is perhaps the best of her six novels, but such an assumption ignores the fact that any of them can be considered her best, and those who have tirelessly read all six over and over again will come up with poignant arguments about each novel’s merits. It is hard to deny, though, that Emma is one of her most unsentimental treatments of budding Romance in the quarters of wealthy, rural England that she knew so well. the novel is about Emma Woodhouse, a wealthy young woman living in rural England who spends most of her time and attention on matchmaking and maintaining her public figure.

At the beginning, Mr.Weston, a prominent businessman, has married her governess, so she spends her time attending to Harriet Smith. This soon turns on Emma, though, as she now must deal with the courtships of Mr.Elton. Like this: Like Loading... Related. Janeaustensociety.nl/studies. The Jane Austen Society. Return to Jane Austen info page See also the AUSTEN-L mailing list Official Websites Older material Note: This page is mainly a relic of a period when none of the Jane Austen societies had official web-sites of their own, and it was often extremely difficult to find out information about upcoming events without already being a member of the society in question. 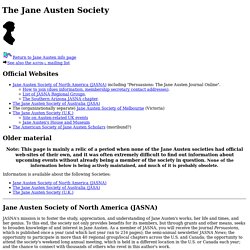 None of the information below is being actively maintained, and much of it is probably obsolete. Information is available about the following Societies: Emma Study Guide. Author Bio Full Name: Jane Austen Date of Birth: 1775 Place of Birth: Steventon, Hampshire, England Date of Death: 1817 Brief Life Story: Jane Austen was the seventh child of the parish rector in the town of Steventon, where she and her family resided until moving to Bath in 1801. 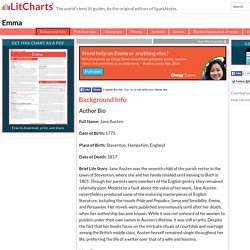 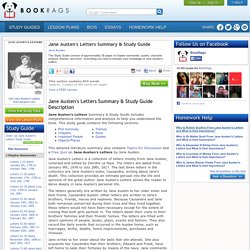 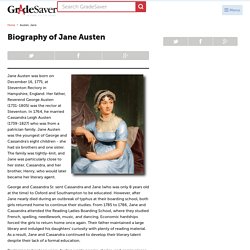 Her father, Reverend George Austen (1731-1805) was the rector at Steventon. In 1764, he married Cassandra Leigh Austen (1739-1827) who was from a patrician family. Jane Austen was the youngest of George and Cassandra's eight children - she had six brothers and one sister. The family was tightly-knit, and Jane was particularly close to her sister, Cassandra, and her brother, Henry, who would later became her literary agent. George and Cassandra Sr. sent Cassandra and Jane (who was only 8 years old at the time) to Oxford and Southampton to be educated. Part 5 - Pride and Prejudice Audiobook by Jane Austen (Chs 51-61) Jane_austen. Timeline. The Jane Austen Society of North America.

10 things you need to know about The Jane Austen Centre HD. Jane Austen Country. Jane Austen Quiz - Interactive Feature. Published: August 8, 2013 A panel of Austen experts devised a quiz to separate the Lizzys from the Lydias, the true devotees from the casual admirers. 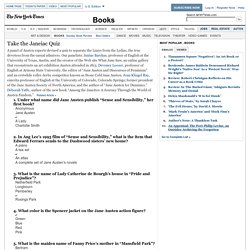 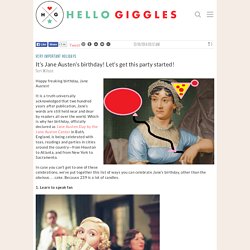 It is a truth universally acknowledged that two hundred years after publication, Jane’s words are still held near and dear by readers all over the world. Which is why her birthday, officially declared as Jane Austen Day by the Jane Austen Center in Bath, England, is being celebrated with teas, readings and parties in cities around the country—from Houston to Atlanta, and from New York to Sacramento. In case you can’t get to one of these celebrations, we’ve put together this list of ways you can celebrate Jane’s birthday, other than the obvious. . . cake. Because 239 is a lot of candles. 1.

Before the era of telephones and texting, how would a potential romantic heroine in an Austen novel make her intentions known? 2. It’s no secret that women have been pining for Mr. Masterpiece. The ultimate Jane Austen literary quiz. English novelist Jane Austen, who was born December 16, 1775, remains one of history's most influential writers. 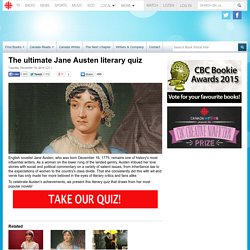 As a woman on the lower rung of the landed gentry, Austen imbued her love stories with social and political commentary on a variety of salient issues, from inheritance law to the expectations of women to the country's class divide. That she consistently did this with wit and verve has only made her more beloved in the eyes of literary critics and fans alike. Jane Austen in quotes: 30 tips for a successful life. It’s no longer universally acknowledged that “a single man in possession of a good fortune must be in want of a wife”, but many of Jane Austen’s thoughts on love, relationships, class, clothes and even the joys of nature are amazingly relevant to modern life. 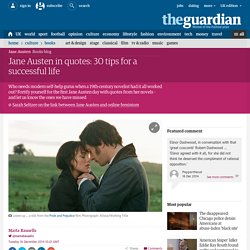 Today marks the 239th anniversary of the author’s birth, and has also been designated the first ever Jane Austen day – to mark the occasion, here are some of the best quotes from the novelist and her characters. On love There are as many forms of love as there are moments in time.” — Personal correspondence No man is offended by another man’s admiration of the woman he loves; it is the woman only who can make it a torment.” —Northanger Abbey (1817) One half of the world cannot understand the pleasures of the other.” The more I know of the world, the more I am convinced that I shall never see a man whom I can really love. If I loved you less, I might be able to talk about it more.” On marriage. Pride and Prejudice: A Jane Austen interactive. Jane Austen’s Advice on Writing, in Letters to Her Teenage Niece.

By Maria Popova Epistles on the fine art of “speeding truth into the world.” 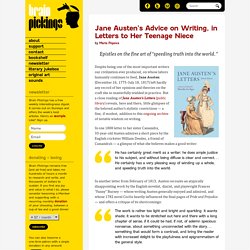 Despite being one of the most important writers our civilization ever produced, on whose labors humanity continues to feed, Jane Austen (December 16, 1775–July 18, 1817) left hardly any record of her opinions and theories on the craft she so masterfully wielded in practice. But a close reading of Jane Austen’s Letters (public library) reveals, here and there, little glimpses of the beloved author’s stylistic convictions — a fine, if modest, addition to this ongoing archive of notable wisdom on writing. In one 1808 letter to her sister Cassandra, 33-year-old Austen admires a short piece by the English cricketer William Deedes, a friend of Cassandra’s — a glimpse of what she believes makes a good writer: But her most explicit counsel on writing comes from a series of letters to her teenage niece, Anna.

My dear Anna,—I am very much obliged to you for sending your MS. Anna never finished her novel. Donating = Loving. Six Lessons We've Learnt From Jane Austen - on love, life and writing. Today is the anniversary of Jane Austen's birthday. She was born 16 December 1775 and died 18 July 1817 I have always loved Jane Austen. I even chose to write about Austen and Feminism many many years ago at university – long before it became fashionable. But why do we love her stories? What is it about them that is timeless? Many would argue that Jane Austen is simply historical chick lit and they wouldn’t be wrong. Austen creates believable, flawed characters who are easy to relate to and she puts them in difficult situations.

Pride and Prejudice, explained in two charts. On this date in 1813, Jane Austen published Pride and Prejudice, her most famous novel, and one of the greatest works of English literature. At its core, Pride and Prejudice tells the love story of Elizabeth Bennett and Mr. Darcy, both of whom have to overcome their biases in order to end up together. Throughout the novel, both characters learn to unlearn their pride and prejudice so that they can come to accept the other's goodness of character. Austen's novel is set in a world where both expectations and reputation matter. Austen sets her satirical eye on this readiness to judge one's character based on one's social position. Elizabeth's and Darcy's character journeys Elizabeth, the second of five sisters, is an intelligent young woman whose tendency to make snap judgments prevents her from seeing Darcy for who he really is.