Assorted resources on the poetess. 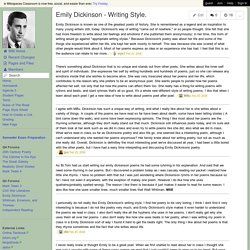 She is remembered as a legend and an inspiration to many young writers still, today. Dickinson's way of writing "came out of nowhere," or so people thought. She felt that she had more freedom to write about her feelings and emotions if she published them anonymously; in her time, this form of writing would go against "appropriate writing styles. " Because Dickinson's poetry was about her life and some of the things she experienced within her life, she kept her work mostly to herself.

This was because she was scared of what other people would think about it. Mje1 Feb 24, 2008 There's something about Dickinson that is so unique and stands out from other poets. MBu Feb 25, 2008 I agree with MBu. Jpu Feb 25, 2008 As Br.Tom had us start writing our emily dickenson poems he had some ryhming in his explenation. Major Characteristics of Dickinson's Poetry. Using the poem below as an example, this section will introduce you to some of the major characteristics of Emily Dickinson's poetry. 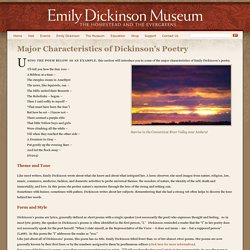 I’ll tell you how the Sun rose –A Ribbon at a time –The steeples swam in AmethystThe news, like Squirrels, ran –The Hills untied their Bonnets –The Bobolinks – begun –Then I said softly to myself –“That must have been the Sun”! But how he set – I know not –There seemed a purple stileThat little Yellow boys and girlsWere climbing all the while –Till when they reached the other side –A Dominie in Gray –Put gently up the evening Bars –And led the flock away –(Fr204)

Dickinson’s Poetry: Analysis. Emily Dickinson is such a unique poet that it is very difficult to place her in any single tradition—she seems to come from everywhere and nowhere at once. 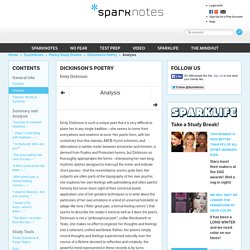 Her poetic form, with her customary four-line stanzas, ABCB rhyme schemes, and alternations in iambic meter between tetrameter and trimeter, is derived from Psalms and Protestant hymns, but Dickinson so thoroughly appropriates the forms—interposing her own long, rhythmic dashes designed to interrupt the meter and indicate short pauses—that the resemblance seems quite faint.

Her subjects are often parts of the topography of her own psyche; she explores her own feelings with painstaking and often painful honesty but never loses sight of their universal poetic application; one of her greatest techniques is to write about the particulars of her own emotions in a kind of universal homiletic or adage-like tone (“After great pain, a formal feeling comes”) that seems to describe the reader’s mind as well as it does the poet’s. Emily Dickinson's Poetic Methods. A glance through Dickinson's poems reveals their characteristic external forms as easily as a quick look through Whitman's poems shows us his strikingly different forms. 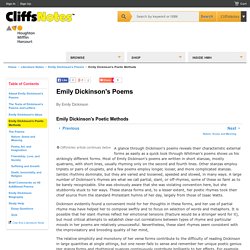 Most of Emily Dickinson's poems are written in short stanzas, mostly quatrains, with short lines, usually rhyming only on the second and fourth lines. Other stanzas employ triplets or pairs of couplets, and a few poems employ longer, looser, and more complicated stanzas. Iambic rhythms dominate, but they are varied and loosened, speeded and slowed, in many ways. A large number of Dickinson's rhymes are what we call partial, slant, or off-rhymes, some of these so faint as to be barely recognizable. She was obviously aware that she was violating convention here, but she stubbornly stuck to her ways. Emily Dickinson’s Birthday: 6 Facts About Her Writing. When Emily Dickinson (born on this day in 1830) wrote her thousands of famous poems, she largely intentionally eschewed publication. 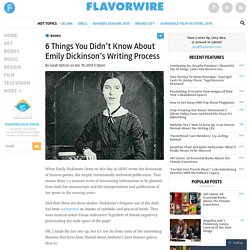 That means there’s a treasure trove of fascinating information to be gleaned from both her manuscripts and the interpretations and publication of her poem in the ensuing years. And then there are those dashes. Dickinson’s frequent use of the dash has been interpreted on dozens of symbolic and practical levels. They were musical notes! Pause indicators! OK, I made the last one up, but it’s not far from some of the interesting theories that have been floated about Amherst’s most famous genius shut-in. Emily Dickinson - Voices & Visions. Biography Emily Dickinson -Biography Online. General Summary Emily Dickinson, regarded as one of America’s greatest poets, is also well known for her unusual life of self imposed social seclusion. 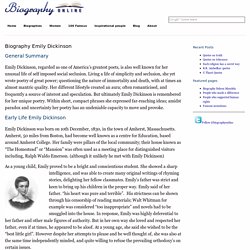 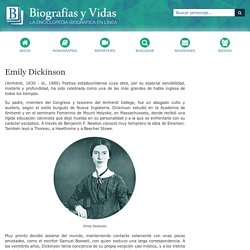 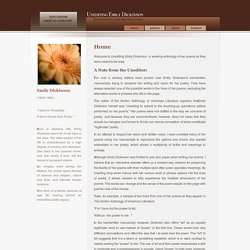 The latter portion of her life is characterized by a high degree of privacy and seclusion.

Emily Dickinson’s Collected Poems Study Guide: “There’s a certain Slant of light” Summary and Analysis. This poem focuses only on the effect of a certain kind of light that the speaker notices on winter afternoons. 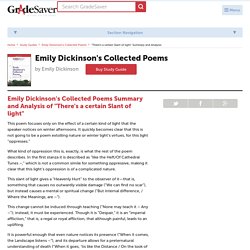 It quickly becomes clear that this is not going to be a poem extolling nature or winter light’s virtues, for this light “oppresses.” What kind of oppression this is, exactly, is what the rest of the poem describes. In the first stanza it is described as “like the Heft/Of Cathedral Tunes –,“ which is not a common simile for something oppressive, making it clear that this light’s oppression is of a complicated nature.

This slant of light gives a “Heavenly Hurt” to the observer of it—that is, something that causes no outwardly visible damage (“We can find no scar”), but instead causes a mental or spiritual change (“But internal difference, / Where the Meanings, are –“). This change cannot be induced through teaching (“None may teach it – Any –“); instead, it must be experienced. Analysis The importance of this painful transformation becomes even clearer in the third stanza. Study Guide. Emily Dickinson's Ideas. Emily Dickinson's major ideas are readily available to us in her poems and letters, but on first reading, they form complicated and often contradictory patterns. 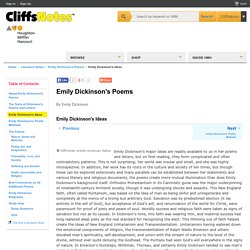 This is not surprising; her world was insular and small, and she was highly introspective. In addition, her work has its roots in the culture and society of her times, but though these can be explored extensively and many parallels can be established between her statements and various literary and religious documents, the poems create more mutual illumination than does Emily Dickinson's background itself. Orthodox Protestantism in its Calvinistic guise was the major underpinning of nineteenth-century Amherst society, though it was undergoing shocks and assaults.

This New England faith, often called Puritanism, was based on the idea of man as being sinful and unregenerate and completely at the mercy of a loving but arbitrary God. For Dickinson, the crucial religious question was the survival of the soul after death. Emily Dickinson Biography. Emily Dickinson was born in Amherst, Massachusetts, on December 10, 1830, and died there some fifty-five years later on May 15, 1886. With the exception of a few visits to Boston, Philadelphia, and Washington, D.C., and some nine months at school at South Hadley, Massachusetts, she spent her whole life in Amherst, most of it in the large meadow-surrounded house called the Dickinson Homestead, across the street from a cemetery.

From 1840 to 1855, she lived with her family in a house on North Pleasant Street, after which they returned to the Homestead. She never married, and she lived in comfortable dependence on her well-to-do father and his estate, though she did more than her share of household chores while creating a large body of poems and letters. About Emily Dickinson's Poems. Enormously popular since the early piecemeal publication of her poems, Emily Dickinson has enjoyed an ever-increasing critical reputation, and she is now widely regarded as one of America's best poets. These Notes focus on clarification of some eighty-five of her poems, chosen and emphasized largely according to the frequency of their appearance in eight standard anthologies, where the average number of her poems is fifty.

These poems also seem to offer an excellent representation of her themes and power. In a final section to these Notes, additional poems are commented on briefly. My Life Closed Twice Before Its Close eText - eText. Emily Dickinson Quotes. The Complete Poems Quotes by Emily Dickinson. “I felt a Funeral, in my Brain,And Mourners to and froKept treading – treading – till it seemedThat Sense was breaking through – And when they all were seated,A Service, like a Drum – Kept beating – beating – till I thoughtMy Mind was going numb – And then I heard them lift a BoxAnd creak across my SoulWith those same Boots of Lead, again,Then Space – began to toll, As all the Heavens were a Bell,And Being, but an Ear,And I, and Silence, some strange RaceWrecked, solitary, here –

Somehow it occurred to me that the words for "America the Beautiful" can be sung to the melody of "Auld Lang Syne. " Try it! The meter is just right for the two songs to use each other's melodies. Yes, things are very slow and boring at work today. Ferggie I was in here on the computer and in the living room I had the TV on and Leno was on ... CalMeacham On the album "A Twisted Christmas" they sang "Oh, Little Town of Bethlehem" to "House of the Rising Sun".

I've noticed that you can interchange "Deck the Halls" with "Hark! Pepper Mill knows quite a few of these (non-Christmas) ones. A Poet Reaches My Soul - unfettered. 5 Flares Twitter 0 Facebook 5 Pin It Share 0 Google+ 0 5 Flares × There is a point in The Belle of Amherst – an off-Broadway play in which poet Emily Dickinson is brought alive by the compelling Joely Richardson — where she describes her experience at Mount Holyoke Female Seminary (as it was known then). The girls were divided into three groups – Christian, Hope, and No Hope. Emily. Emily Dickinson. Emily Dickinson: The Poet In Her Bedroom.

The 1800s brought with it writers and poets alike determined to bring forth new imaginings tying the dichotomic scientific principles and spiritual ideals of the time together in what is now considered romantic literature. The Soul Selects Her Own Society – Emily Dickinson. (c) 2014 Margaret Langstaff, All Rights Reserved.