CLIL incorporated into project work. Dear colleagues all over the world! 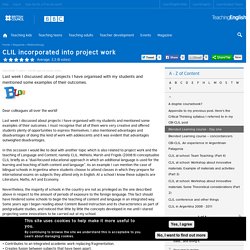 Last week I discussed about projects I have organised with my students and mentioned some examples of their outcomes. I must recognise that all of them were very creative and offered students plenty of opportunities to espress themselves. I also mentioned advantages and disadvantages of doing this kind of work with adolescents and it was evident that advantages outweighed disadvantages.

In this occasion I would like to deal with another topic which is also related to project work and the teaching of Language and Content, namely CLIL. Mehisto, Marsh and Frigols (2008:9) conceptualise CLIL briefly as a “dual-focused educational approach in which an additional language is used for the learning and teaching of both content and language”. Nevertheless, the majority of schools in the country are not as privileged as the one described above in respect to the amount of periods of exposure to the foreign language. Paula, Tucuman, Argentina. CBI-CLIL. An experience in Argentinian Patagonia. CBI in practice The adoption of a content-based approach in my professional practice began at a bilingual school in 2004 within the EFL courses when my students expressed the need to learn subject matter in English. 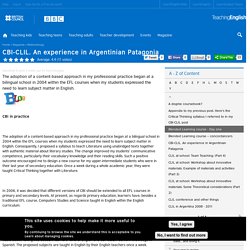 Consequently, I proposed a syllabus to teach Literature using unabridged texts together with authentic material about literary studies. The change improved my students’ communicative competence, particularly their vocabulary knowledge and their reading skills. Such a positive outcome encouraged me to design a new course for my upper-intermediate students who were in their last year of secondary education. Once a week during a whole academic year, they were taught Critical Thinking together with Literature. In 2006, it was decided that different versions of CBI should be extended to all EFL courses in primary and secondary levels. In 2006, a study (Banegas 2008: 208-214) was carried out to support our CBI programme. Sharing views of CLIL lesson planning in language teacher education. 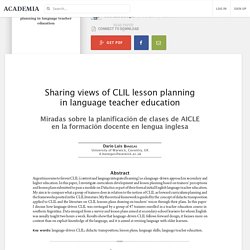 (p. 213) CLIL (Content and Language Integrated Learning) is an umbrella term that includes diﬀerent conceptualisations for the integration of curriculum content and language learning. In its inception, CLIL was a European initiative and since then it has found its way in contexts out-side Europe, as noted in Ruiz de Zarobe (2013). Down to the content end of this continuum (see Dalton-Puﬀer & Nikula, 2014; Koopman, Skeet, & de Graﬀ, 2014; Ruiz de Zarobe & Cenoz, 2015), Latin America embraces CLIL from a broader stance (Mariño Avila, 2014; Curtis, 2012; Matear, 2008; Ravelo, 2013). Dr Dario Banegas. Background I graduated as a teacher of English in Entre Ríos (Argentina) in 2000 and started to work as a secondary school teacher in Esquel. 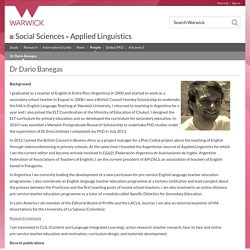 In 2008 I won a British Council Hornby Scholarship to undertake the MA in English Language Teaching at Warwick University. I returned to teaching in Argentina for a year and I also joined the ELT Coordination at the Ministry of Education of Chubut. I designed the ELT curriculum for primary education and co-developed the curriculum for secondary education. In 2010 I was awarded a Warwick Postgraduate Research Scholarship to undertake PhD studies under the supervision of Dr Ema Ushioda. In 2012 I joined the British Council in Buenos Aires as a project manager for a Plan Ceibal project about the teaching of English through videoconferencing in primary schools. 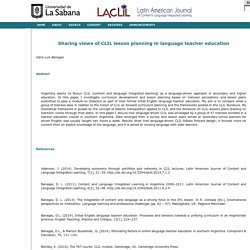