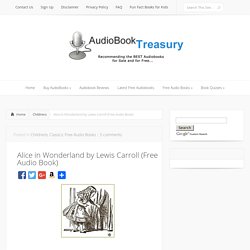 Alice in Wonderland tells the story of the titular character Alice, a young, adventurous and headstrong girl as she falls inside a rabbit hole while chasing a white rabbit she saw running around their garden. What happens next is an amazing adventure in a world where nothing is not what it may seem. Alice meets a myriad of strange and wondrous characters such as the Cheshire cat, the Mad Hatter and the dreadful and tyrannical Red Queen. This children’s fantasy story as with Wonderland is not with it actually appears to be. Alice’s Adventures in Wonderland. The Secret Jokes Hidden in Alice in Wonderland. W. 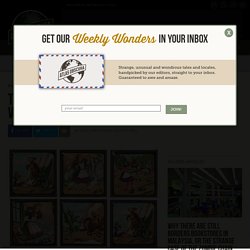 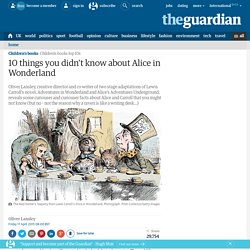 Alice’s character was based on a real-life little girl named Alice Liddell. She was in fact not a blonde as illustrated in the book but a brunette. The real life Alice has been portrayed in fiction almost as many times than the fictional one! Recently in John Logan’s stage play Peter and Alice in which she was played by Dame Judi Dench. 2. Alice in Wonderland (1995) Alice's Adventures in Wonderland Audiobook by Lewis Carrol. 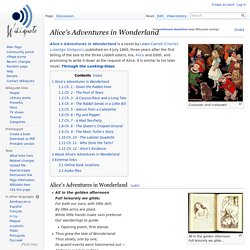 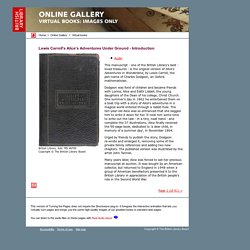 Dodgson was fond of children and became friends with Lorina, Alice and Edith Liddell, the young daughters of the Dean of his college, Christ Church. Alice's Adventures in Wonderland. Background Page from the original manuscript copy of Alice's Adventures Under Ground, 1864 Alice was published in 1865, three years after Charles Lutwidge Dodgson and the Reverend Robinson Duckworth rowed in a boat on 4 July 1862[4] (this popular date of the "golden afternoon"[5] might be a confusion or even another Alice-tale, for that particular day was cool, cloudy, and rainy[6]) up the Isis with the three young daughters of Henry Liddell (the Vice-Chancellor of Oxford University and Dean of Christ Church): Lorina Charlotte Liddell (aged 13, born 1849, "Prima" in the book's prefatory verse); Alice Pleasance Liddell (aged 10, born 1852, "Secunda" in the prefatory verse); Edith Mary Liddell (aged 8, born 1853, "Tertia" in the prefatory verse).[7] The journey began at Folly Bridge near Oxford and ended five miles away in the village of Godstow. 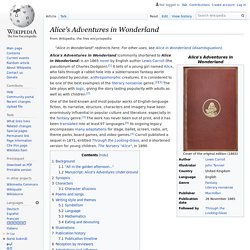 Didapages: Ebook. Literature.org - The Online Literature Library. The 100 best novels: No 18 – Alice's Adventures in Wonderland by Lewis Carroll (1865) On 4 July 1862, a shy young Oxford mathematics don with a taste for puzzles and whimsy named Charles Dodgson rowed the three daughters of Henry Liddell, dean of Christ Church, five miles up the Thames to Godstow. 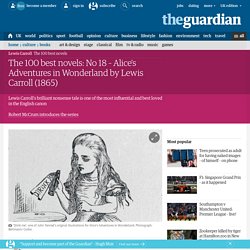 On the way, to entertain his passengers, who included a 10-year-old named Alice, with whom he was strangely infatuated, Dodgson began to improvise the "Adventures Under Ground" of a bored young girl, also named Alice. Wordplay, logical conundrums, parody and riddles: Dodgson surpassed himself, and the girls were enchanted by the nonsense dreamworld he conjured up. The weather for this trip was reportedly "overcast", but those on board would remember it as "a golden afternoon". This well-known story marks the beginning of perhaps the greatest, possibly most influential, and certainly the most world-famous Victorian English fiction, a book that hovers between a nonsense tale and an elaborate in-joke. Alice’s Adventures in Wonderland.