Read all Smart Watches Updates, Effective tips to improve the performance of Smart watches and its reviews with Smart Watch Novel.

Bellabeat LEAF Review. A Smart-Leaf by Bellabeat Every Woman Must Have Imagine a jewelry smart enough to track your fitness activity, breathing activity, sleep cycle, and monthly cycle. 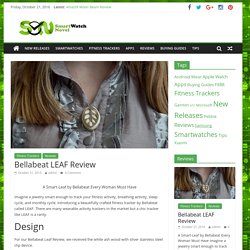 Introducing a beautifully crafted fitness tracker by Bellabeat called LEAF. There are many wearable activity trackers in the market but a chic tracker like LEAF is a rarity. Design For our Bellabeat Leaf Review, we received the white ash wood with silver stainless steel clip device. The device is in the shape of a leaf – the main body is made of natural wood while the leaf design which is the clip; made of stainless steel. It’s elegant yet bulky at around 48x30x13 mm and weighs 18g. Buying Guides: Top 5 Best Fitness Trackers Under $50 Tracking and its App The unique feminine design compliments the no-fuss app and tracking system. When it comes to activity; the Leaf tracks your daily step, distance covered and calories; while the sleep functions record light sleep, deep sleep, and disturbances. Sleep is the next tab we tried. Guess Connect Review. Fossil Q Founder Review. There is a certain sense of confidence we get when we consider buying a smartwatch made by traditional watchmakers. 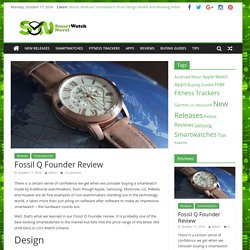 Even though Apple, Samsung, Motorola, LG, Pebble, and Huawei are all fine examples of non-watchmakers standing out in the technology world, it takes more than just piling on software after software to make an impressive smartwatch – the hardware counts too. Well, that’s what we learned in our Fossil Q Founder review. It is probably one of the best-looking smartwatches in the market but falls into the price range of the Moto 360 (2nd Gen) or LG’s Watch Urbane.

Design Like all traditional watchmakers, Fossil has ensured that their Q Founder smartwatch maintains the authentic look of their brand. One of the biggest selling points for the Q Founder is its IP67 rating which makes it dust and water resistant. You may also read: Fossil Q54 Pilot Smartwatch Is the Next Smartwatch By Fossil Display Other than that, the display is more than impressive. Performance. Bragi Dash Review. Bragi Dash earbuds at its best Wireless earbuds which do more than streaming music. 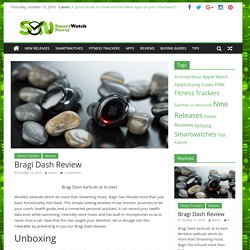 Bagri has infused more than just basic functionality into Dash. This simple looking wireless in-ear monitor promises to be your coach, health guide, and a connected personal assistant. It can record your health data even while swimming, internally store music and has built-in microphones so as to never miss a call. Amazfit Moon Beam Review. Can this ceramic-based wearable from Amazfit be wrist worthy? Activity + sleep tracker – meet yet another smart wearable this time from Amazfit; a California-based wearable technology manufacturer. Amazfit Moon Beam is an activity tracker wearable which accesses biomechanical signals to deliver smart data on a smartphone. And is a very pleasing option from the brightly colored silicon devices we have in the name of fashion. What is Smartwatch? A smartwatch looks like a wrist watch designed with advanced functionalities, as like a computer can do. 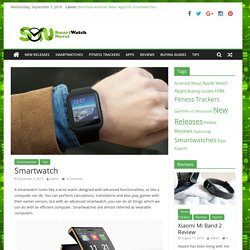 You can perform calculations, translations and also play games with their earlier version, but with an advanced smartwatch, you can do all things which we can do with an efficient computer. Smartwatches are almost referred as wearable computers. Some smartwatches are capable of running mobile applications and a fewer model can run mobile operating system too. Camera, accelerometer, thermometer, altimeter, barometer, compass, chronograph, calculator, cell phone, touch screen, GPS navigation, Map display, graphical display, speaker, scheduler, watch, SD cards and rechargeable battery are the most common features found between modern smartwatches.

The possibility of accessing internet makes the smartwatch even smarter one. Effective Tips To Use Google Fit App. Google fit is nothing but an open ecosystem that helps to store, access and manage your fitness data. 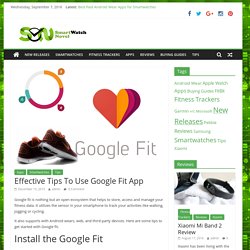 It utilizes the sensor in your smartphone to track your activities like walking, jogging or cycling. It also supports with Android wears, web, and third-party devices. Best Free Android Wear Apps For your Smartwatch. Android Wear is a best and most popular OS platform for Smartwatches since from its beginning and one of the main reason behind its popularity is its stunning Apps. 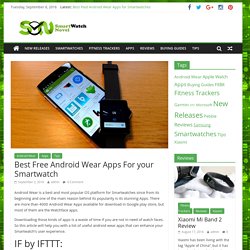 There are more than 4000 Android Wear Apps available for download in Google play store, but most of them are the Watchface apps. Downloading those kinds of apps is a waste of time if you are not in need of watch faces. So this article will help you with a list of useful android wear apps that can enhance your Smartwatch’s user experience. IF by IFTTT: IFTTT – If This Then That. Blocks Modular Smartwatch: Final Design Model And Working Video. If you have pre-ordered for the Blocks Modular Smartwatch during its Kickstarter campaign then this will be good news for you. 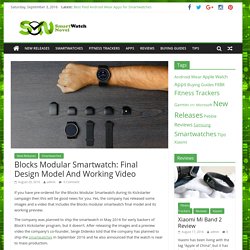 Yes, the company has released some images and a video that includes the Blocks modular smartwatch final model and its working preview. The company was planned to ship the smartwatch in May 2016 for early backers of Block’s Kickstarter program, but it doesn’t. After releasing the images and a preview video the company’s co-founder, Serge Didenko told that the company has planned to ship the smartwatches in September 2016 and he also announced that the watch is near to mass production.

A Quick Guide to Install Android Wear apps on your Smartwatch. A Smartwatch is a thing that was discovered to make difficult things easier and you can even make things more simple with the help of some stunning Android wear apps that are designed especially for Smartwatches. 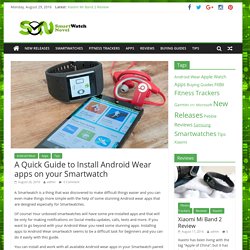 Of course! Your unboxed smartwatches will have some pre-installed apps and that will be only for making notifications on Social media updates, calls, texts and more. Xiaomi Mi Band 2 tips and tricks. Hi all, if you owned a new Xiaomi Mi band 2 fitness band and don’t know how to stay fit with your new Xiaomi Mi band 2? 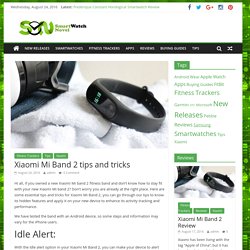 Don’t worry you are already at the right place. Here are some essential tips and tricks for Xiaomi Mi Band 2, you can go through our tips to know its hidden features and apply it on your new device to enhance its activity tracking and performance. We have tested the band with an Android device, so some steps and information may vary for the iPhone users.

Idle Alert: Best Paid Android Wear Apps for Smartwatches. Apps are the only thing that makes Smartwatches as the best Gadget and without apps we can only use them as a time seeing device. Most Smartwatches comes with some default apps, but those apps are not enough to make an outstanding experience. Xiaomi Mi Band 2 Review. Xiaomi has been living with the tag “Apple of China”, but it has been hard at work to break away from this and create a name that stands out on its own. Although their smartphones, tablets, speakers, televisions, and other electronic goods got the whole Chinese OEM craze started, it is one area where the company has had no trouble in creating a positive buzz – fitness trackers. And yes, they might have just two of them in the lineup, but we are taking a look at the newer Mi Band 2 today.

It brings along better features, impressive specifications, and a certain simplicity that cannot be matched. Garmin Vivofit 3 Review. Is Garmin Vivofit 3 worth the price it commands? The latest fitness tracker from Garmin’s Vivofit series is redecorated as compared to its forbearer with an addition of very few new features. Our Garmin Vivofit 3 review below tells you if it’s worth investing in this no-frill tracker. By the way, it’s all day wearability, attention grabbing interchangeable bands and long battery life has managed to please fitness trackers. Frederique Constant Horological Smartwatch Review. A luxurious watch with smart fitness tracking ability – Frederique Constant Horological Smartwatch. Smartwatches have become fashion statements. Fitbit Blaze Review. Fitbit Blaze has some very cool features worth checking If you have heard that Fitbit Blaze is like an Apple watch; trust me it’s just a hype. The first impression may make you think of an Apple watch but the similarities end there.

Anyways, let’s discuss this smartwatch for what it offers, in our Fitbit Blaze Review. Fitbit Alta Review. When it comes to fitness bands or fitness trackers, very few companies can actually compete with Fitbit. Listed as the second best fitness wearable device manufacturer in the world after Apple, they have a long line of smartwatches and fitness bands that deliver on pretty much every aspect. Among their diverse collection, the Alta is a device that really stands out with its impressive looks and powerful features.

We spent some time with the device, played around with it, and tried to find out if this device truly lives up to the hype around it. Android Wear 2.0: Upcoming Features. Apple watchOS 3: What is New? Excitement abounds on the new features of Apple watchOS 3 The WWDC 2016 showcased some very commendable features being brought to all software of Apple. Let us focus on the impressive advancements made to its watchOS. In the month of August, we expect to see Apple watchOS 3 roll out to more than 10 million Apple smartwatch user for free. Android Wear on iPhone: Guide for Beginners. Don’t be shocked after pairing Android Wear to iPhone.

Which Fitbit Tracker should you Buy? Top 5 Best Fitness Trackers Under $50. Have you just started on a mission to get fit or lose extra weight? Fitness tracking devices can be the answer in motivating you, accurately tracking distance, steps, and calories burnt, help you in making healthier choices without creating a hole in your account. We have done the footwork for you to bring 5 easy to handle fitness trackers under $50. Jawbone UP Move Smart inside, stylish outside. Top 5 Analogue Smart Watches to Buy. Top 5 GPS Running Watches. Best Fitness Trackers To Buy In 2016 - Smart Watch Novel. I previously wrote an article to list some best fitness trackers in 2016 and this list consists of the trackers which ranked them in the best trackers list. Fitness Tracker Tips: Best Fitness Trackers For 2016. There are so many branded fitness trackers like Jawbone, Misfit, Fitbit, Garmin and more are available in Market and choosing a best one among them is quite difficult. Choosing the right activity tracker is only up to you, yes your needs and considerations make them best for you.