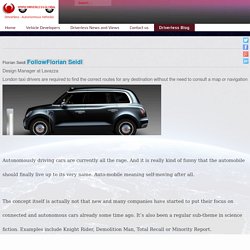 And it is really kind of funny that the automobile should finally live up to its very name. Auto-mobile meaning self-moving after all. The concept itself is actually not that new and many companies have started to put their focus on connected and autonomous cars already some time ago. It’s also been a regular sub-theme in science fiction. Examples include Knight Rider, Demolition Man, Total Recall or Minority Report. But now everyone seems to be interested in these particular technologies and is wondering what it will do to the way we perceive and interact with cars.

Mercedes is currently trying to figure out if and what impact it might have with their own series of concept cars. Mercedes-Benz F015 Luxury in Motion Mercedes-Benz Vision TokyoVolvo is also pushing in the name of universal safety. Then there are suppliers like Johnson Control and of course the whole Silicon Valley crowd. Local Motors recently presented an autonomous pod. Self-driving cars: from 2020 you will become a permanent backseat driver.

In the BMW museum at the company’s solidly futuristic headquarters, next to the old Olympic stadium site in Munich, you can view a century of evolving mechanical desire. 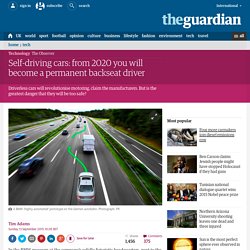 BMW has long prided itself in creating “ultimate driving machines” and all that Bavarian engineering pride is dramatised in the decade-by-decade progression of engines that harness ever more efficient power in steel, and car bodies that have moved with the ergonomic times. Each sequence of cars on show leaves a gap at one end, ready to showcase the next generation of technical advancement. Over the past century, innovation has smoothly followed innovation; it is likely, however, that the next stage will be a paradigm shift rather than a marginal gain.

The next empty space, or the one after, is likely to be filled by the ultimate driverless machine. The person leading BMW’s prototype efforts to make that car a reality, Michael Aeberhard, does not want to see it in those terms. Or at least I do. “But only just?” Let the Robot Drive: The Autonomous Car of the Future Is Here. The object, vaguely pink, sits on the shoulder of the freeway, slowly shimmering into view. 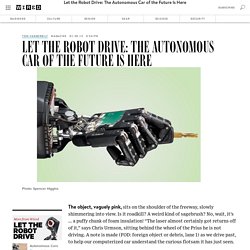 Is it roadkill? A weird kind of sagebrush? No, wait, it’s … a puffy chunk of foam insulation! “The laser almost certainly got returns off of it,” says Chris Urmson, sitting behind the wheel of the Prius he is not driving. A note is made (FOD: foreign object or debris, lane 1) as we drive past, to help our computerized car understand the curious flotsam it has just seen. It’s a Monday, midday, and we are heading north on California Highway 85 in a Google autonomous vehicle.

Anthony Levandowski, business lead on Google’s self-driving-car project, sits in the passenger seat, lanky and spectacled, wearing loud athletic shoes and clutching a MacBook Pro with a bumper sticker that reads “My other car drives itself.” The Prius begins to seem like the Platonic ideal of a driver. Google isn’t the only company with driverless cars on the road.

2016 Audi Q7 Driver Assistance Systems. How Laser Scanning Works. Tesla Summon 4k in Snow. Meet the 26-Year-Old Hacker Who Built a Self-Driving Car... in His Garage. Google Self-Driving Car Project. Brad Ideas - Nightly. I often see the suggestion that as Robocars get better, eventually humans will be forbidden from driving, or strongly discouraged through taxes or high insurance charges. Many people think that might happen fairly soon. It’s easy to see why, as human drivers kill 1.2 million people around the world every year, and injure many millions more. If we get a technology that does much better, would we not want to forbid the crazy risk of driving? It is one of the most dangerous things we commonly do, perhaps only second to smoking. Even if this is going to happen, it won’t happen soon. There are occasional exceptions, though usually only if they are easy to do. While I often talk about the horrible death toll, and how bad human drivers are, the reality is that this is an aggregation over a lot of people. As such, forbidding driving would be a presumption of guilt where most are innocent, and tough call from a political standpoint. Insurance goes down, not up You will also need insurance.