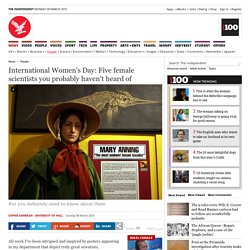 They are women, and their appearance on the walls marks International Women’s Day. Try to recall a woman scientist and Marie Curie may be the first and perhaps only name that springs to mind. This is a shameful state of affairs, when for more than a century scientists who happen to be women have reached great scientific heights, despite the many barriers they faced on account of their gender. So here are five women whose amazing discoveries and contribution to science should be as well-known and respected as those of Marie Curie: Lise Meitner – nuclear physics. Weekend Diversion: The astronomer who brought us the Universe — Starts With A Bang!

“Her will tells nearly all. 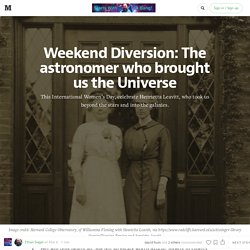 She left an estate worth $314.91, mostly in Liberty Bonds, with a few items such as a desk valued at $5. She never married and had few living relatives. She also left behind a legacy of a great astronomical discovery.” -Jeremy Bernstein, on Henrietta Leavitt If you go back to the early 1900s and before, you’ll find a huge body of important scientific work that laid the foundation for humanity’s discovery of exactly what the Universe is like today: where it came from, what the laws are that govern it, and how it came to be the way it is today.

While you consider one of the most glorious sights in the Universe: the galaxies beyond our own. Science Fairs Aren't So Fair — Atlantic Mobile. These K-12 events are hardly more than a competition among over-involved parents. 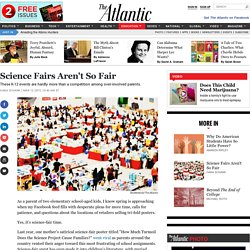 As a parent of two elementary school-aged kids, I know spring is approaching when my Facebook feed fills with desperate pleas for more time, calls for patience, and questions about the locations of retailers selling tri-fold posters. Yes, it’s science-fair time. Last year, one mother’s satirical science-fair poster titled "How Much Turmoil Does the Science Project Cause Families? " went viral as parents around the country vented their anger toward this most frustrating of school assignments. Sat-navs and mobile apps 'threaten map-reading skills' - BBC News. Map-reading skills are under threat because of a growing reliance on smartphones and sat-navs, experts say. 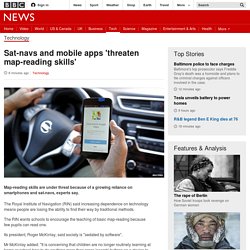 The Royal Institute of Navigation (RIN) said increasing dependence on technology means people are losing the ability to find their way by traditional methods. The RIN wants schools to encourage the teaching of basic map-reading because few pupils can read one. Its president, Roger McKinlay, said society is "sedated by software". Top 10 Science Stories of 2015. It’s been a busy year for scientists: medical breakthroughs; newly discovered human ancestors; genes and neurons; Earth’s troubled species; and enticing findings from Mars, Pluto, and beyond. 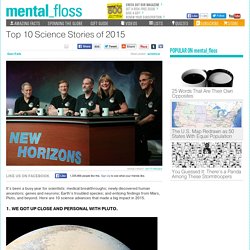 Here are 10 science advances that made a big impact in 2015. These women are turning science into cash - Feb. 26, 2016. Yes, engineering is their passion. 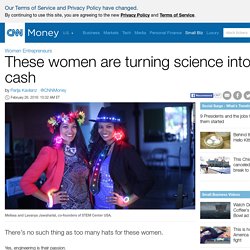 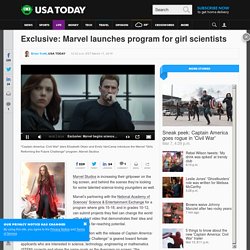 Marvel Studios Marvel Studios is increasing their girlpower on the big screen, and behind the scenes they’re looking for some talented science-loving youngsters as well. Marvel’s partnering with the National Academy of Sciences’ Science & Entertainment Exchange for a program where girls 15-18, and in grades 10-12, can submit projects they feel can change the world with a short video that demonstrates their idea and explains its far-reaching potential.

Five finalists will be picked to travel to California to present their projects to a panel of experts, and they’ll also receive an invitation to hit the red carpet at the Civil War world premiere at Hollywood’s Dolby Theatre April 12, a tour of Walt Disney Studios and a $500 saving account from Synchrony Bank. Cartography: Flattening Earth. On-Demand Videos for the Incurably Curious. This mesmerizing video shows how incredibly vast space really is. Light travels at about 186,000 miles per second. 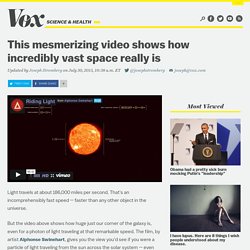 That's an incomprehensibly fast speed — faster than any other object in the universe. But the video above shows how huge just our corner of the galaxy is, even for a photon of light traveling at that remarkable speed. The film, by artist Alphonse Swinehart, gives you the view you'd see if you were a particle of light traveling from the sun across the solar system — even though it's 45 minutes long, you still don't even reach Saturn. This video is a striking reminder that even though we grow up looking at diagrams of the solar system with the planets neatly packed together, it's actually almost entirely made up of empty space.

The distance between our planet and the others is many times larger than we can wrap our heads around — and the planets themselves are small enough to fit in the gap between Earth and the moon. Gizmodo. Animagraffs - Animated infographics by Jacob O'Neal : Animagraffs. 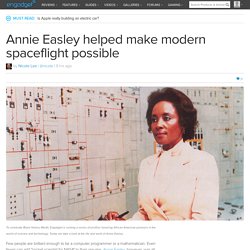 Today we take a look at the life and work of Annie Easley. Few people are brilliant enough to be a computer programmer or a mathematician. Even fewer can add "rocket scientist for NASA" to their resume. Annie Easley, however, was all three. During her 34-year career, she worked not only on technologies that led to hybrid vehicles, but also on software that enabled great strides in spaceflight and exploration. Born in Birmingham, Alabama, in 1933, Easley was raised by a single mother who instilled the value of education at a very early age. Back then, schools were racially segregated, with whites and blacks attending different schools, and the latter were often considered inferior. Frontiers for Young Minds. Some spiders can sail across oceans, scientists say. Here's Why Scientists Are Giving Honeybees Tiny 'Backpacks' Stephen Hawking's big ideas ... made simple - animation. 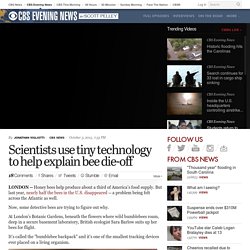 But last year, nearly half the bees in the U.S. disappeared -- a problem being felt across the Atlantic as well. What's Quicksand? - How Quicksand Works. Quicksand is an interesting natural phenomenon -- it is actually solid ground that has been liquefied by a saturation of water. The "quick" refers to how easily the sand shifts when in this semiliquid state. Quicksand is not a unique type of soil; it is usually just sand or another type of grainy soil. Quicksand is nothing more than a soupy mixture of sand and water. It can occur anywhere under the right conditions, according to Denise Dumouchelle, geologist with the United States Geological Survey (USGS). PassPub_0511.pdf. Huge Alien Planet Bathes in the Light of Four Suns.

"It's amazing the way nature puts these things together. " 30 Ari lies 136 light-years from the sun in the constellation Aries. World's Strangest Natural Wonders. Ever played the game of Twister on water? The green, yellow, and brown polka dots that form on British Columbia’s Spotted Lake each summer make it look like you could. It’s a far cry from the stereotypical landscapes of clear blue lakes, rolling green hills, and white-sand beaches that inspire most travelers—and that’s part of what makes strange natural wonders like Spotted Lake so thrilling. A recently discovered cave that grows crystals the size of four-story buildings, a lake the color of a strawberry milkshake, and a glacier that seems to bleed sound like they’re from another planet, but can be seen right here on earth, and they remind us that there’s plenty of mystery left to explore.