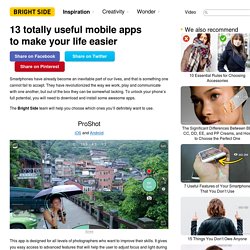 They have revolutionized the way we work, play and communicate with one another, but out of the box they can be somewhat lacking. To unlock your phone’s full potential, you will need to download and install some awesome apps. My Favorite Video Creation iPad Apps for Elementary School. When it comes to creating videos in elementary school there are some qualities needed in an iPad app that aren’t needed in apps for older students. 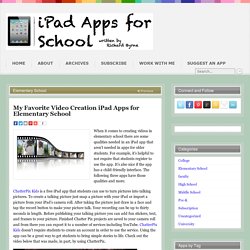 For example, it’s helpful to not require that students register to use the app. It’s also nice if the app has a child-friendly interface. The following three apps have those qualities and more. ChatterPix Kids is a free iPad app that students can use to turn pictures into talking pictures. To create a talking picture just snap a picture with your iPad or import a picture from your iPad’s camera roll.

5 Handy Chrome Extensions for Teachers. After seeing my browser in one of my tutorial videos or one of my presentations, people often ask me about the extensions that I have installed. 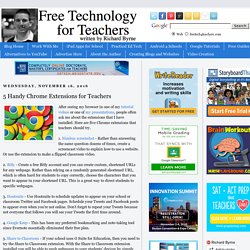 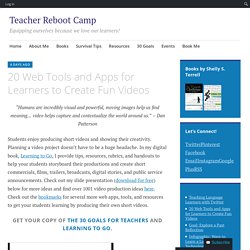 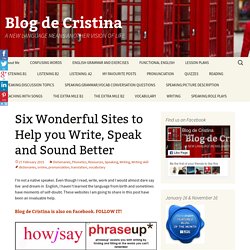 Even though I read, write, work and I would almost dare say live and dream in English, I haven’t learned the language from birth and sometimes have moments of self-doubt. These websites I am going to share in this post have been an invaluable help. Blog de Cristina is also on Facebook. FOLLOW IT! Tools - Gapfill generator. 10 Websites for English Language Students. A few years ago I wrote a blog post about 10 Websites for English Language Teachers. 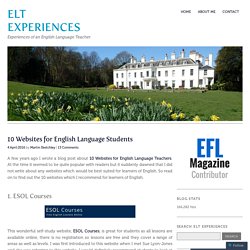 The Seven Best Video Website for ELT Students - Kieran Donaghy. As part of the launch of the website I’m organising a prize draw for my new book Film in Action. 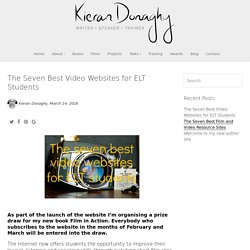 Everybody who subscribes to the website in the months of February and March will be entered into the draw. The Internet now offers students the opportunity to improve their lexical, listening and speaking skills through watching short film clips, videos and short films. Here are my seven favourite sites. English Central Possibly the best website for students to improve their vocabulary, listening, speaking and pronunciation.

English Attack A aimed specifically at young students which uses clips from movies and TV series; music videos, themed visual glossaries; learning games and social networking to help language learners improve their English. Learn English Teens Film UK A British Council website which gives students the opportunity to watch innovative short films made by young people, and do a variety of activities designed around the films. 5 Apps to Transform Teaching and Personalize Learning. Transformation requires a journey for teachers toward great educational rewards for students. 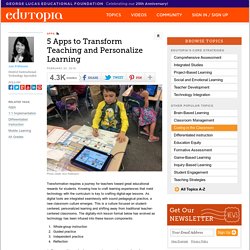 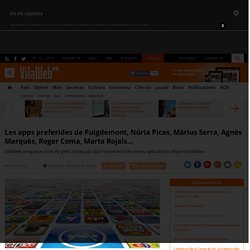 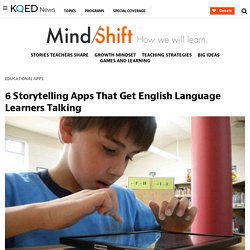 In fact, the dread of speaking can actually interfere with students’ ability to learn. DnA - Resources. Howjsay is a talking dictionary of English pronunciation. It allows you to easily check how words sound without learning any phonemic symbols. It uses audio of real speakers! Key Features Over 150,000 entries with approximately 250,000 spoken pronunciations One-click access to fast, clear sounds All pronunciations are carefully researched before inclusion British English pronunciation with World English alternatives British and American spellings History feature allows you to browse previous entries All sounds are authentic - no synthetic sounds are used Same database as the world's leading English pronunciation website, www.howjsay.com, with regular updates and addition of new topical words Many foreign words, names of places, foods, people, etc.

Social-Emotional Apps for Special Ed. Social and emotional learning (SEL) is the cornerstone of emotional intelligence, as these abilities do not come naturally for some special education students. Children in special ed settings need to have their confidence, courage, and emotional awareness nurtured in order to successfully play, work, cooperate, and be productive in their studies.