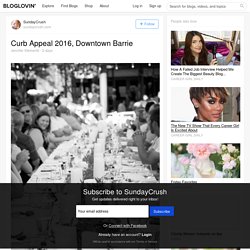 I couldn’t help it, I love parties, I love planning and I love dressing up. So, when it came to inspiration, I didn’t need to look much further than my favourite historical character: Marie Antoinette. I find Marie Antoinette a fascinatingly complex character, one that is so often portrayed as one dimensional; she’s best known for something she never even said, “let them eat cake“. Could online apps help save indie bookshops? The rise of online retailers and ebooks have had a devastating impact on the UK’s independent bookshops. 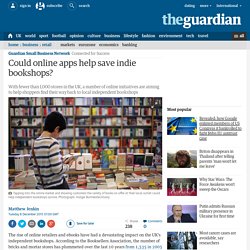 According to the Booksellers Association, the number of bricks and mortar stores has plummeted over the last 10 years from 1,535 in 2005 to just 939 in 2014. A number of online initiatives are now fighting back to save these physical outlets from further decline. NearSt is one business aiming to help shoppers find their way back to local bookshops with a simple smartphone app. It allows users to tap in the product they want to purchase and then shows nearby stores where it is stocked. Similar to click and collect, the customer can then place an order and pick it up at that location. “Shopping locally should be easier than shopping online. Constraints on time and resources also mean independent booksellers struggle to launch their business online. But does the app really have what it takes to compete with the reach, speed and price of online retail giants? River%20Project%20Report%20English.pdf. Ch10_Essay.pdf. Rhaigbrown_brochure.pdf. Blue Mountain - History. It was the spring of 1883 when Charles Rankin was sent to survey the “Wild Land” beyond the Simcoe district. 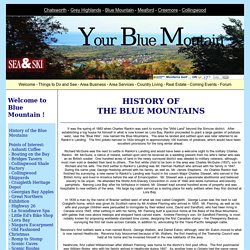 After establishing a log house for himself in what is now known as Lora Bay, Rankin proceeded to plant a large garden of potatoes west, near the “Blue Hills”, now named the Blue Mountains. The area he landed and settled upon was later referred to as Rankin’s Landing. Thornbury in Bloom - MyThornbury. Next event Wednesday 4th February 2015 7.30pm: 'Nature on our doorstep: snapshots of Thornbury's wildlife'The Swan, Thornbury An illustrated talk by Paul Raven, local conservationist and author, showing the fascinating variety of plants and animals which can be seen from a bicycle ride or ramble along our local lanes. 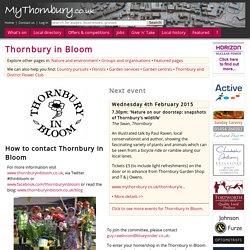 Tickets £5 (to include light refreshments) on the door or in advance from Thornbury Garden Shop and T & J Owens. www.mythornbury.co.uk/thornbury/e... • More details >> Click to see more events for Thornbury in Bloom. How to contact Thornbury in Bloom For more information visit www.thornburyinbloom.co.uk, via Twitter #thinbloom or www.facebook.com/thornburyinbloom or read the blog: www.thornburyinbloom.co.uk/blog To join the committee, please contact guy.rawlinson@blueyonder.co.uk (requires JavaScript to display) To enter your home/shop in the Thornbury in Bloom competition, please collect an entry form from Thornbury Garden Shop or T & J Owen's Florist during the Spring. Latest News. Pitlochry Fish Ladder and Dam. Map Data Map data ©2015 Google Pitlochry Fish Ladder and Dam was constructed between 1947 and 1951, damming up the River Tummel to form Loch Faskally some 5km in length. 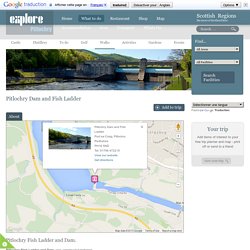 This flooded the old Pitlochry Recreation Ground and Highland Games Field. Explore Highland Perthshire Newsletter 2014 by Highland Perthshire. Pitlochry Feature Page on Undiscovered Scotland. Pitlochry's growth from tiny settlement to bustling and attractive town can be traced back to a two notable visitors. 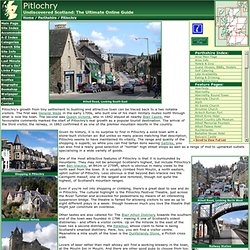 The first was General Wade in the early 1700s, who built one of his main military routes north through what is now the town. The second was Queen Victoria, who in 1842 stayed at nearby Blair Castle. Her favourable comments marked the start of Pitlochry's real growth as a popular tourist destination. The arrival of the third visitor, the railway, in 1863 confirmed it as one of the premier mountain resorts in the country. Given its history, it is no surprise to find in Pitlochry a solid town with a stone-built Victorian air. Pitlochry Salmon Ladder Tour Info. Details Find Scotland Tours that feature the Pitlochry Salmon Ladder. 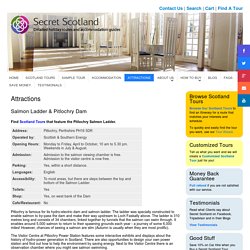 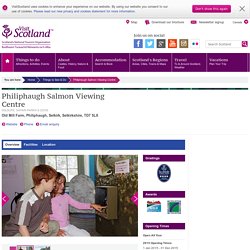 Find out where to watch leaping salmon in Scotland this autumn. A leaping salmon at the Falls of Shin in the Highlands Autumn is one of the best times of the year to witness majestic natural sights. 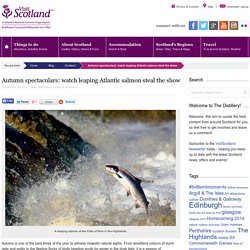 From woodland colours of burnt reds and golds to the fleeting flocks of birds heading south for winter in the dusk light, it is a season of breathtaking spectacles. Although ‘fish watching’ might not hold the same appeal as bird watching, it is well worth visiting rivers across the country to see one of the most spectacular displays in the animal kingdom, as Atlantic salmon leap up river to their breeding grounds. On their remarkable journey, salmon make their way back from the ocean to the rivers and follow them upstream. During this time, there are ferocious currents to battle through and waterfalls to ascend, some several metres in height. Perthshire scotland pitlochry vacations. Perthshire WTSD 2014. Fishing in Pitlochry. Enjoy salmon, trout and grayling fishing in the ‘Heart of the Highlands’ Fishing includes superb salmon and trout beats on the River Tummel and River Garry as well as bank and boat fishing on Loch Bhac and Loch Kinardochy for rainbow trout and brown trout respectively. 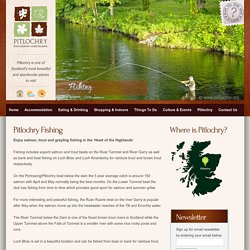 Overview of Pitlochry Fish Ladder. Synopsis%20of%20Presentation%20-%20Grey%20Bruce%20County%20Fall%20presentation%202013_small. Loch Faskally and Pitlochry Fish Ladder. Hear pronunciation Press to hear pronunciation An interesting circuit of Loch Faskally from the centre of Pitlochry. The walk includes a pretty metal suspension bridge over the river, passes the Festival Theatre and the fish ladder on the dam before following the peaceful waters of Loch Faskally. Terrain Clear paths and minor roads. Public Transport. Experiential Tourism - noto.ca. Experiential Tourism what is Experiential Tourism? Experiential tourism is an outgrowth of a global movement toward experiential learning, whereby people create meaning through direct experience. Experiential tourism has become the current term that encompasses a variety of tourism and traveler categories, including the following: cultural tourism, ecotourism, educational travel, experimental tourism, heritage tourism and nature tourism, where activities are environmentally sensitive, displaying respect for the culture of the host area and looking to experience and learn rather that merely stand back and gaze.

Experiential tourism involves active participation, involvement, even immersion. Several key points in planning interpretive tourism: Feast ON – Learn More. FOR LOCALS AND TRAVELLERS ALIKE, Feast ON IS A CRITERIA-BASED PROGRAM THAT RECOGNIZES BUSINESSES COMMITTED TO SHOWCASING ONTARIO’S UNIQUE TASTES OF PLACE. THIS INCLUDES: Procuring. Food produced or harvested in Ontario, or food and drink made in Ontario if they include ingredients produced or harvested here. Partnering. Being part of a local, regional, provincial, or national program that supports and showcases Ontario food and drink, its agricultural sectors, and best practices in the industry.