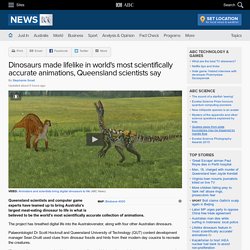 The project has breathed digital life into the Australovenator, along with four other Australian dinosaurs. Palaeontologist Dr Scott Hocknull and Queensland University of Technology (QUT) content development manager Sean Druitt used clues from dinosaur fossils and hints from their modern day cousins to recreate the creatures. "Because dinosaurs are wedged between crocodiles and birds on the evolutionary tree, we can use modern day crocodiles and modern day birds as our palate to choose from," Dr Hocknull said. "When we look at the animals and look at the fossils, we can actually use all of this information to reconstruct them as accurately as you possibly could without a time machine. " "We really had to disengage everything we'd learnt before," Mr Druitt said. Photoset 'Maurice Wilson et al' by Laoshu64. Facebook. Foto Galeri: Prehistorik Canlılar.

Sauroposeidon Sauroposeidon (meaning “earthquake god lizard”) is a genus of sauropod dinosaur, remains were found in the southwestern portion of the US state of Oklahoma. 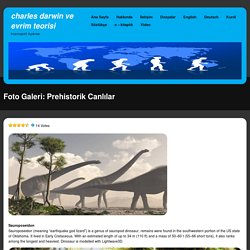 It lived in Early Cretaceous. With an estimated length of up to 34 m (110 ft) and a mass of 50–60 t (55–66 short tons), it also ranks among the longest and heaviest. Dinosaur is modelled with Lightwave3D. Skorpiovenator Skorpiovenator is known from a single, nearly complete skeleton missing only most of the forelimbs and parts of the tail. The specimen was recovered from the Huincul Formation in Patagonia, dating to the late Cretaceous, about 93 million years ago.Skorpiovenator length is 9 m (29,5 feet). Abelisaurus Abelisaurus is a genus of abelisaurid theropod dinosaur from the Late Cretaceous Period (between 83 and 80 million years ago) of what is now South America. Velafrons Velafrons is a genus of lambeosaurine hadrosaurid dinosaur from the Late Cretaceous, about 73.5 million yearsago, of Mexico. Franco tempesta . home. LES DINOSAURES EN BD - Bamboo Édition - BD. BizleyArt - Gallery - Category: Mesozoic. Richard Bizley Art for Sale. The Art of Gary Collins Artist-Illustrator-Animator.

Jellyfish's use of NUKE for BBC's 'Planet Dinosaur' Peel Back the Layers. A while back I started a project in which I would reconstruct an ancient animal layer by layer, moving from various organ systems using some degrees of inference to make sure these organs are correctly aligned, and perhaps correctly sized. 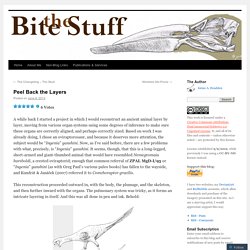 Based on work I was already doing, I chose an oviraptorosaur, and because it deserves more attention, the subject would be “Ingenia” yanshini. Now, as I’ve said before, there are a few problems with what, precisely, is “Ingenia” yanshini. It seems, though, that this is a long-legged, short-armed and giant-thumbed animal that would have resembled Nemegtomaia barsboldi, a crested oviraptorid; enough that common referral of ZPAL MgD-I/95 or “Ingenia” yanshini (as with Greg Paul’s various paleo books) has fallen to the wayside, and Kundrát & Janáček (2007) referred it to Comchoraptor gracilis. This reconstruction proceeded outward in, with the body, the plumage, and the skeleton, and then further inward with the organs. Like this: Like Loading... 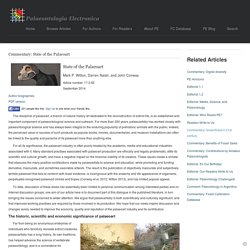 Witton, Darren Naish, and John Conway Article number: 17.3.5ESeptember 2014 Author biographiesPDF version The discipline of palaeoart, a branch of natural history art dedicated to the reconstruction of extinct life, is an established and important component of palaeontological science and outreach. For more than 200 years, palaeoartistry has worked closely with palaeontological science and has always been integral to the enduring popularity of prehistoric animals with the public. For all its significance, the palaeoart industry is often poorly treated by the academic, media and educational industries associated with it. To date, discussion of these areas has essentially been limited to personal communication among interested parties and on internet discussion groups; one aim of our article here is to document part of this dialogue in the published literature, in turn bringing the issues concerned to wider attention.