Did Dinosaurs Have Lips? Paleoartist Puts a Face on Ancient Bones. CHICAGO—After careful consideration, Tyler Keillor made a decision: T. rex had lips. 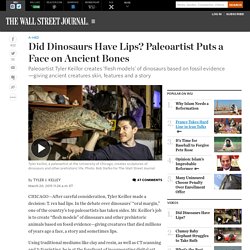 In the debate over dinosaurs’ “oral margin,” one of the country’s top paleoartists has taken sides. Mr. Keillor’s job is to create “flesh models” of dinosaurs and other prehistoric animals based on fossil evidence—giving creatures that died millions of years ago a face, a story and sometimes lips. Using traditional mediums like clay and resin, as well as CT scanning and 3-D printing, he is at the forefront of incorporating digital art and technology into paleontology. Mr. Love in the Time of Chasmosaurs: Vintage Dinosaur Art: Prehistoric Monsters. A slightly unusual entry this week - in fact, it's a book completely devoid of illustrations. Instead, it's packed full of photographs by Jean Philippe-Varin that veer wildly from the artistically impressive to the downright hilarious - usually dependent upon the subject.

The best ones feature life-sized models that, while almost always scientifically obsolete, are nevertheless quite awe-inspiring through their sheer size and the craftmanship involved (most of them aren't your usual goofy 1980s fibreglass monstrosities). The worst photos feature toys. We'll get to those in due course. The Diplodocus on the cover is certainly very retro, but it's an impressive photograph nonetheless - the detailing in the sculpt is admirable, and the lush scenery is suitably evocative (actually, it reminds me of the Hawaiian locations used in Jurassic Park , although this book - from 1987 - predates the film by some years).

In a similar vein (and colour), here's a Parasaurolophus . And so, to the toys. Re-texturing a Poser Model With ZBrush. Pterosaurs: Adapted for Flight. Sculpture. Rugops (meaning "wrinkle face") is a genus of theropod dinosaur which inhabited what is now Africa approximately 95 million years ago. 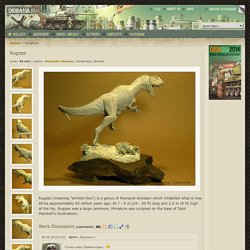 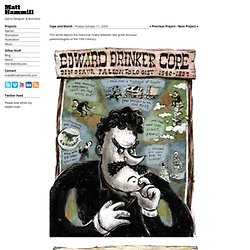 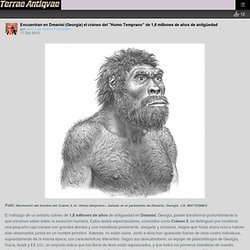 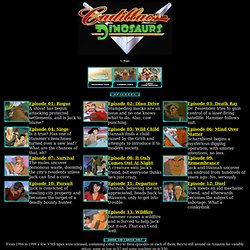 The series has yet to get an official DVD release, presumably due to trademark hiccups with General Motors. Amazon offers (offered?) A Video On Demand service, charging $2 for each episode or $21 for the whole series; I can't verify the quality of the service, as it's blocked to anyone outside of the United States. JONATHAN KUO. Willis O'Brien RARE PHOTOS ~ Animal World, Kong, Son Of Kong... in Kong - 8th Wonder of the World Forum. Yuku free message boards ForgotPassword? 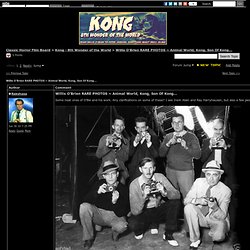 Sign Up Grab the Yuku app More Sharing Services 0 0 Points «Prev Next» Dinosaurs: The Facts and Fiction - How to build a Dinosaur - BBC. Fossils and Myths. Dinosaur Sculpting some new projects.mp4. OUT OF PRODUCTION! 1:18 Ceratosaurus vs. Kentrosaurus by Foulkes and sold by NICE-N Model Designs. OUT OF PRODUCTION! 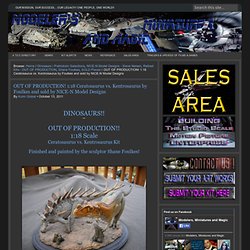 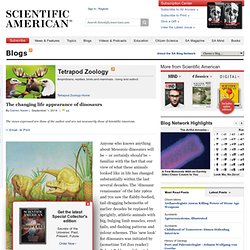 Jurassic dinosaurs as illustrated by Peter Zallinger: these are svelte, lightweight animals typical of the late 1970s and 80s. Hat-tip to LITC for the scan. Anyone who knows anything about Mesozoic dinosaurs will be – or certainly should be – familiar with the fact that our view of what these animals looked like in life has changed substantially within the last several decades. The ‘dinosaur renaissance’ of the late 1960s and 70s saw the flabby-bodied, tail-dragging behemoths of earlier decades be replaced by sprightly, athletic animals with big, bulging limb muscles, erect tails, and dashing patterns and colour schemes. 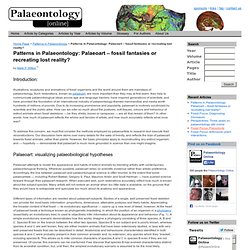 Witton*1 Introduction: Illustrations, sculptures and animations of fossil organisms and the world around them are mainstays of palaeontology. Such restorations, known as palaeoart, are more important than they may at first seem: they help to communicate palaeontological ideas across age and language barriers; have inspired generations of scientists; and have provided the foundation of an international industry of palaeontology-themed merchandise and media worth hundreds of millions of pounds. Due to its increasing prominence and popularity, palaeoart is routinely scrutinized by scientists and the public alike. To address this concern, we must first consider the methods employed by palaeoartists to research and execute their reconstructions.

Jonathan kuo artwork. The Evolution of Life on Earth: Archive. The Evolution of Life on Earth: Archive. Animal inhabitants-Early Jurassic of Asia old world. The Dinosaur Toy Forum: Version 1 Archive. Although introduced to the general public by the highly successful documentary WWD, Postosucus remain one of the more obscure figure out.It did not enjoy the same fame that others from the series, such as Liopleurodon, Ornithucheirus, Muttaburrasaurus, and Torosaurus received.Perhaps it is due to the fact that the Rauisuchian are poorly known group of prehistoric predators that we have not seen more figures of them.Fortunately, Toyway included it in their official WWD line of toy figures, offering us the first Postosuchus toy figure offered.The new Safari 2009 postosuchus and a JP figure join their WWD predecessor as only a handful of figures currently available. 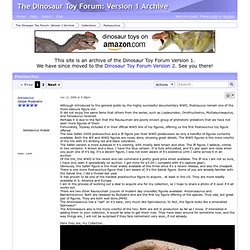 Both the WS and WWD figures are nicely done, showing great details. The WWD figures is the more colorful of the trio with it's striking red and black coloration.The Safari version is more subdued in it's coloring, with mostly dark brown and olive. The JP figure, I believe, comes in two versions: A brown and a blue. Pravěká zvířata. Elasmosaurs by Sammy Hall from the Global Outfitters' Wildlife Art. Chiodo Bros.' Inter-Dimensional Safari. Peninsula Iberica, Concavenator, Juanjo... Zdeněk Burian. Dinosaurs.

Dinosaur animation & stuff. Dinosaurs and Dragons. Blue Rhino Studio: Artistic Fabrication and Design. Sea and Land by J. W. Buel, 1889 - an album on Flickr. Tower of Time by John Gurche. Pin by Jk Gruft on Dinosaurs, Ghosts of the Earth. A Comprehensive Guide to Dinosaur Feathers and Scales. Beyond T. REX (4 of 5) Beyond T. REX (4 of 5) 64,000,000 Years ago. From DocuWiki [edit] Information This short animated film for children looks at the last of the great dinosaurs to stalk the central plains of North America. Planet of Life. Earthquakes, volcanoes, ice ages, landslides, floods, life evolution, plate motions—all of these phenomena have interacted over the vast expanses of deep time to sculpt the dynamic planet that we live on today. This Emmy award-winning Discovery Channel series traces the four-billion-year evolutionary history of the world covering the origin and evolution of life on Earth.

Each episode covers a separate chapter in the biography of the world, the geological, physical and chemical conditions in which life might arise. Examine the birth, development, and destiny of earth. Website Translation. Professional Translation Quote Click here for free translations. Automated Machine Translation Machine translation is a cost-effective alternative to professional translation. Flying Monsters Trailer. David Attenborough's Rise of Animals: Triumph of the Vertebrates - Dinosaur Hip Development. Eyewitness - Dinosaur pt. 1. Luis V. Rey Updates Blog. Cheap Thrills! Visiting your local boot sale in London is almost always guarantee that you’ll find some new dinosaur toy rejects… that’s what happened couple weeks ago: spent £2 and got a full bag of selected dinotoys… among which I found a pretty accurate (unknown make to me at least) Triceratops that gave me an idea… Everytime I see something that is close of what I expect I have to go further.

This time I did what I always wanted to do to many other of my collectible models but had never dare! For the first time here it is in all its glory: Triceratops with my interpretation of the new skin topography! It has been extremely fun and very challenging; I really think this is the closest I could get to really get the impression of the new, spiky Triceratops everybody is talking about… and is based on pictures of the real thing! Ancient Denvers Paintings - After Armageddon - Image Archives. JurassicHawksBlog.jpg (Obrazek JPEG, 612×479 pikseli) ImageBam. LAND OF DINOSAURS movie. Андрей Белов Home page. Динозавры. Андрей Белов Home page. Динозавры. Tyrannosaurus walkcycle. Brushstrokes: Fantastic illustrations. Portfolio. Dinosaurs. FredtheDinosaurman. Kouzelný školní autobus - 17 Dinosaurus 1994, česky (CZ)