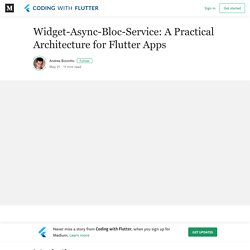 All opinions are my own. Introduction State management is a hot topic in Flutter right now. Over the last year, various state management techniques were proposed. The Flutter team and community have not (yet) settled on a single “go-to” solution. This makes sense, because different apps have different requirements. Truth be told, some state management techniques have proven very popular. Scoped Model is known for its simplicity.BLoCs are also widely used, and they work well with Streams and RxDart for more complex apps.Most recently at Google I/O, the Flutter team showed us how to use the Provider package and ChangeNotifier to propagate state changes across widgets.

Provider. Flutter HTTP requests with Dio, RxDart and Bloc. Making HTTP requests in mobile application is one of the common tasks. 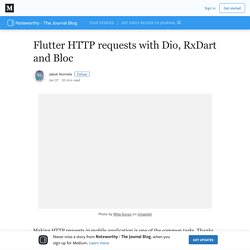 Thanks to http requests application can communicate with backend and selects data. Flutter framework offers http package which works great when we need do basic stuff. When we need to do something more advanced we something bigger. And this can be done by using Dio. Dio is http connection library which has extra features like interceptors which will be helpful in many tasks (adding token authentication for each request, logging requests). Todays modern mobile development hot topic is reactive paradigm. ReactiveX. Understanding Streams in Flutter (Dart) – Flutter Community. Let’s understand this with examples The main purpose of this example is to let you understand how the streams work. 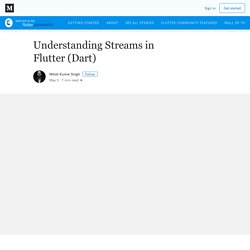 These examples will make you familiar with some available methods and property of the Stream. Stream Methods All the available example can be run on Dartpad. I highly recommend you to run the examples and see the pattern of output and understand them. Flutter Architecture-ScopedModel, A complete guide to real world architecture. This way a ScopedModel is directly associated with a View file/widget. 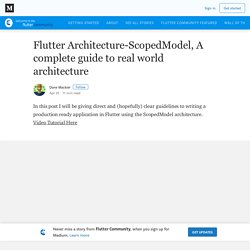 This produces a bit more boiler plate code because you have to create a scoped model for every view you create. For my production app I used one AppModel and grouped specific pieces of Functionality together under separate mixin models. As the app grew I was mixing state reduction for my views because one Model had to reduce state for multiple views so it became a bit cumbersome. After some review I’ll be moving over to the second option. Stream class - dart:async library - Dart API. A source of asynchronous data events. 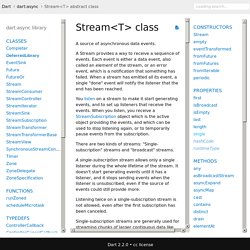 A Stream provides a way to receive a sequence of events. Each event is either a data event, also called an element of the stream, or an error event, which is a notification that something has failed. When a stream has emitted all its event, a single "done" event will notify the listener that the end has been reached. You listen on a stream to make it start generating events, and to set up listeners that receive the events. When you listen, you receive a StreamSubscription object which is the active object providing the events, and which can be used to stop listening again, or to temporarily pause events from the subscription. 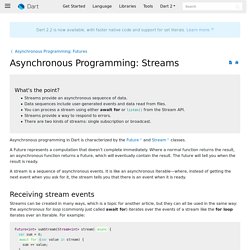 Learn more. What's the point? Streams provide an asynchronous sequence of data. Data sequences include user-generated events and data read from files. You can process a stream using either await for or listen() from the Stream API. Asynchronous programming in Dart is characterized by the Future and Stream classes. Dart Package. README.md CHANGELOG.md Example Installing Versions 100. 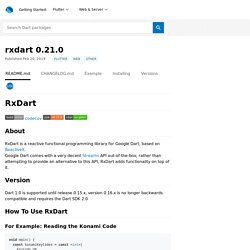 Flutter Todos Tutorial with “flutter_bloc” – Flutter Community. Setup We’ll start off by creating a brand new Flutter project flutter create flutter_todos We can then replace the contents of pubspec.yaml with: and finally install all of our dependencies. 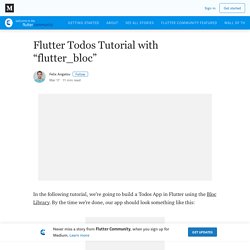 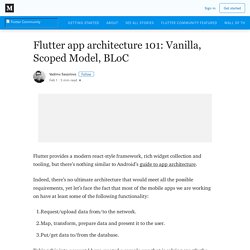 Indeed, there’s no ultimate architecture that would meet all the possible requirements, yet let’s face the fact that most of the mobile apps we are working on have at least some of the following functionality: Request/upload data from/to the network.Map, transform, prepare data and present it to the user.Put/get data to/from the database. Taking this into account I have created a sample app that is solving exactly the same problem using three different approaches to the architecture.

User is presented with a button “Load user data” in the center of the screen. When user clicks the button asynchronous data loading is triggered and the button is replaced with a loading indicator. Let’s get started. Data. Guide to app architecture   This guide is for developers who are past the basics of building an app and now want to know the best practices and recommended architecture for building robust, production-quality apps. 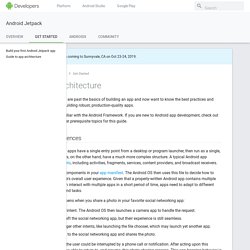 This page assumes you are familiar with the Android Framework. If you are new to Android app development, check out our Developer guides, which cover prerequisite topics for this guide. Mobile app user experiences In the majority of cases, desktop apps have a single entry point from a desktop or program launcher, then run as a single, monolithic process. Android apps, on the other hand, have a much more complex structure. You declare most of these app components in your app manifest. Flutter - Web Sockets - Build a Real-time Game. WebSockets allow real-time communication between the Mobile App and the Server. Flutter - BLoC - ScopedModel - Redux - Comparison. BLoC, Scoped Model, Redux… Comparison… when to use them and why? Difficulty: Beginner Introduction BLoC, ScopedModel, Redux… differences, when to be used, when NOT to be used, advantages, disadvantages… Many questions frequently asked on this topic and so many answers can be found on the Internet but is there any right choice?

In order to provide my own analysis, I have considered 2 distinct types of use-cases, built a quick solution to cover these use-cases using the 3 frameworks and compared them. The full source code that covers Redux, ScopedModel and BLoC solutions can be found on GitHub. Fundamentals of Dart Streams. Welcome to part 2 of my series on Flutter Architecture: IntroductionFundamentals of Dart Streams (this post)RxDart: Magical transformations of StreamsRxVMS foundations: RxCommand and GetItRxVMS: Services & ManagersRxVMS: The self responsible widgetUser Authentication the RxVMS way Streams are the main building block of RxVMS so we will take a closer look at them in this post because understanding Streams is an absolute requirement to understand RxVMS. It turned out that including Rx in this post would make it too long so I split it two parts. I read a lot of comments that say Streams and especially Rx is too hard to understand, so they don’t use it.

RxVMS a practical architecture for Flutter Apps. This is the fist post of a series of posts that will explain my take on App architecture for Flutter. It will be highly opinionated so be warned Planned posts so far: Introduction (this post)Fundamentals of Dart StreamsRxDart: Magical transformations of StreamsRxVMS foundations: RxCommand and GetItRxVMS: Services & ManagersRxVMS: The self responsible widgetUser Authentication the RxVMS way Background I’m in software now for about 20 years. While using MVVM with Xamarin Forms was just natural I was surprised when coming to Flutter that there was no recommend architectural pattern. The ugly truth of too much Layering It’s almost a dogma in software development that you always should build your Apps in several layers where each layer should only access the next layer below because it will allow you to: Reuse layers in other projectLet’s you easily replace on layer with another oneMakes them easier testable.