Steam refunds: Does Valve win either way? On Tuesday Steam added a refund procedure that allows you to get a full refund on any Steam game you’ve purchased in the last 14 days, for any reason, as long as you’ve played the game for less than 2 hours. 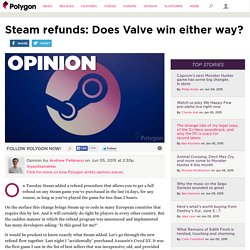 On the surface this change brings Steam up to code in many European countries that require this by law. And it will certainly do right by players in every other country. But the sudden manner in which the refund program was announced and implemented has many developers asking: "Is this good for me? " How Bloodstained and Yooka-Laylee are helping smaller Kickstarters just by existing. Earlier in the week we ran a story about the negative impact huge, well-known games and creators are having on Kickstarter when it comes to helping people understand the true cost of making a game. 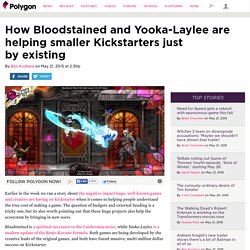 The question of budgets and external funding is a tricky one, but its also worth pointing out that these huge projects also help the ecosystem by bringing in new users. Bloodstained is a spiritual successor to the Castlevania series, while Yooka-Laylee is a modern update of the Banjo-Kazooie formula. Both games are being developed by the creative leads of the original games, and both have found massive, multi-million dollar success on Kickstarter. "Useful stats: 22% of Bloodstained backers and 39% of Yooka backers have never backed a project before," Kickstarter's David Gallagher said via Twitter, responding to our original story. 'Big indie' Kickstarters are killing actual indies. We all know the Kickstarter bubble is bursting. 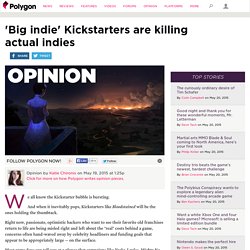 And when it inevitably pops, Kickstarters like Bloodstained will be the ones holding the thumbtack. Right now, passionate, optimistic backers who want to see their favorite old franchises return to life are being misled right and left about the "real" costs behind a game, concerns often hand-waved away by celebrity headliners and funding goals that appear to be appropriately large — on the surface.

Most game devs can tell you at a glance that campaigns like Yooka-Laylee, Mighty No. 9, Bloodstained and others are heavily deflating the costs of their development cycle, sometimes not-so-secretly planning to search for the bulk of their actual funding elsewhere or hoping to be massively overfunded. The amount asked for initially has nothing to do with the real cost of making the game. Does Kickstarter hurt your brand? Why this Warhammer 40k game couldn't crowdfund. Games Workshop, the creator of the Warhammer 40,000 universe, prevented Behaviour Games from using Kickstarter to fund the upcoming game Warhammer 40,000: Eternal Crusade. 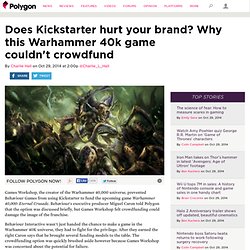 Here's why Amazon is gaming's most fascinating company right now. The most interesting company operating in video games right now? 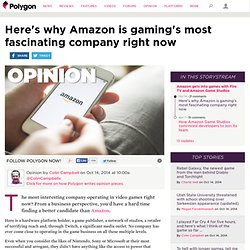 From a business perspective, you'd have a hard time finding a better candidate than Amazon. Here is a hardware platform holder, a game publisher, a network of studios, a retailer of terrifying reach and, through Twitch, a significant media outlet. No company has ever come close to operating in the game business on all these multiple levels. Even when you consider the likes of Nintendo, Sony or Microsoft at their most successful and arrogant, they didn't have anything like the access to power that Amazon might command, were it to reach its lofty goals. Of course, there are lots of things about Amazon's games effort right now that are very much in the realms of potentiality. Big Challenges Those hardware platforms amount to a micro-console, tablets and a mobile phone that have been received with, at best, moderate enthusiasm.

I visited the company in San Francisco last week, and I looked at a couple of games. The S Word. What it feels like to launch an indie hit. What do you do when you can't sell your game? Give it away. Developers won’t be able to sell their games on the upcoming Samsung and Oculus VR platform Gear VR for the first few months. 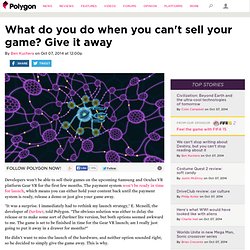 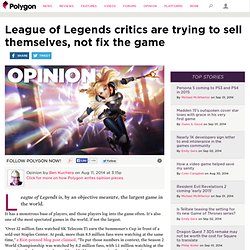 It has a monstrous base of players, and those players log into the game often. It's also one of the most spectated games in the world, if not the largest. "Over 32 million fans watched SK Telecom T1 earn the Summoner's Cup in front of a sold-out Staples Center. At peak, more than 8.5 million fans were watching at the same time," a Riot-penned blog post claimed. "To put those numbers in context, the Season 2 World Championship was watched by 8.2 million fans, with 1.1 million watching at the same time.

There is no metric by which League of Legends isn't a huge success. A poor conversion rate A recent Gamasutra article claimed that the conversion rate of players who download the game into players who purchase goods is rather low. Game of Thrones is the first 'free-to-play' TV show, and gaming is racing to catch up. You shouldn't pre-order Alien: Isolation (or any other game) What does it really cost to open an indie studio? All your money, most of your life. It is common to hear about game companies having crushing financial woes in the games press. 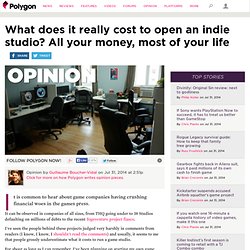 It can be observed in companies of all sizes, from THQ going under to 38 Studios defaulting on millions of debts to the recent Yogsventure project fiasco. I've seen the people behind these projects judged very harshly in comments from readers (I know, I know, I shouldn't read the comments) and usually, it seems to me that people grossly underestimate what it costs to run a game studio. For about as long as I can remember, I've been planning on starting my own game studio.

It's an ambition I nurtured throughout my youth.