But where is the green sheep? Old maps put the art in cartography. The national library's Trove digital service has been highlighting quirky old maps of the continent, starting with a 1920s graphic dividing the country up into the sheep haves and have-nots. 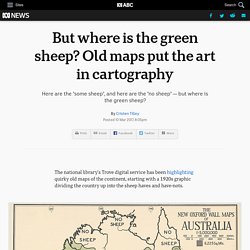 Artist Judy Horacek, who illustrated Mem Fox's children's classic Where is the Green Sheep? , approved of the idea. For the record, Meat and Livestock Australia has this more modern take on the old sheep map, which is impressively precise — who knew there were only 167 head of sheep in the Northern Territory? — but not as charming. The sheep map was such a hit, Trove has been pointing out other old maps of Australia in their collection of more than 600,000. All of those sheep needed 'much grass' to graze on. What was the purpose of the maps? Maps curator at the National Library of Australia, Martin Woods, says these types of maps were produced for government circulation, school text-books or as part of campaigns to change public awareness or support industry. What else can we find out from old maps?

The world’s catalogue of ideas. Hidden Object Games - New Free Unlimited Games Online. Two Refugees and a Blonde: Laughing with asylum seekers. Throughout refugee week, the nation's attention is turning to the plight of those who've fled their homeland in the search for a better life in Australia. 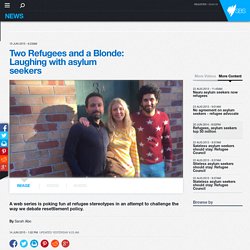 A lot of their stories are harrowing, but a Melbourne trio are also taking a lighter look at life as a refugee in this new land. Actress and writer Rain Fuller has teamed up with playwright Shahin Shafaei and comedic actor Osamah Sami to create a web series titled “Two Refugees and a Blonde”. On the surface, the title reflects the reality - starring Fuller as the blonde, Sami and actor Behrouz Harvesi, as refugees – but the story is tinged with humour, poking fun at the way refugees are perceived. "We're trying to create a dialogue," Fuller said. "This topic of refugees and asylum seekers coming to Australia has been a hotly contested issue and very serious issue for so many years. " The comedy looks at what happens when two Muslim refugee men arrive on the doorstep of an outspoken blonde radio host, asking where their rooms are.

Conversion for International Ring Sizes. 20 Things So Ridiculously Ironic That You'll Think It Must Be A Joke. This Is Hilarious. Irony is a part of life, sometimes a very unfortunate part of life. 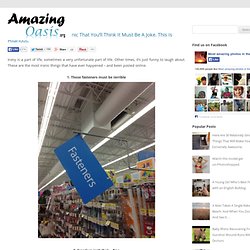 Other times, it’s just funny to laugh about. These are the most ironic things that have ever happened – and been posted online. 1. Those fasteners must be terrible 2. 3.From the world’s most famous orphan 4.Oh, if they truly loved photography 5.He really should have seen this coming 6.Hopefully they got a refund 7.Well, that’s a bit on the nose 8. 9.If only this product knew the irony… 10.Now that’s some awesome city planning 11.… except this 12.If you are, don’t use this tutor 13.Hopefully the locks on the Ford Escape are solid 14.Ummmm, oops?

15.How does this even happen… 16.If you’ve read 1984, you’ll know how hilarious this is. The Homepage du jour of S. Morgan Friedman. Lego will fix our broken bricks. Two weeks ago, we took part to a workshop leaded by Jan Vormann, artist and creator of Dispatchwork, a nice, colored urban “hacking” practice which consists in filling holes in stone or brick-made wall with hundreds of lego bricks. 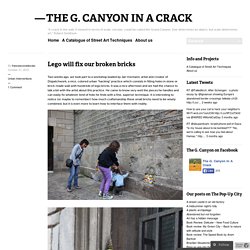 It was a nice afternoon and we had the chance to talk a bit with the artist about this practice. He came to know very well the pieces he handles and can easily fix whatever kind of hole he finds with a fine, superior technique. It is interesting to notice (or maybe to remember) how much craftsmanship these small bricks need to be wisely combined, but it is even more to learn how to interface them with reality. Building worlds made entirely out of lego is a reminiscence of our childhood but using them to “fix” wall in a urban hacking practice sounds kind of more grown-up game, maybe closer to contemporary street art practices, but in a reversible way, since legos can in any moment be removed, dismantled and turn back to their original shape.

Photos by The G. Pikagami Randomness - Origami Icosahedron by Lewis Simon and Bennett...