CommonSense AT&T CyberBullying Parent Resources English. English — Soul Behind That Screen. Last year, AT&T and the Tyler Clementi Foundation conducted a survey of New York City teens and parents on cyberbullying that found while nearly 50% of teens had experienced cyberbullying, only 1 in 2 told their parents. 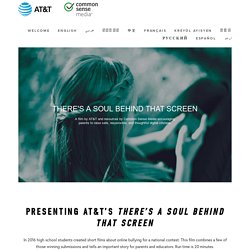 To help parents, educators and teens understand and address this issue together, AT&T and the All American High School Film Festival organized a national contest inviting high school students across the country to create short films about their own experiences with cyberbullying. The contest culminated in New York City and winners were announced at the Teen Indie Awards on October 10, 2016. AT&T’s film There’s a Soul Behind That Screen incorporates a few of those winning submissions from the contest to tell an important story for adults. For parents who watch the film, Common Sense Media developed useful advice using various situations in the film as a way to explain how to talk with kids about online safety.