Macmillan to launch two-year ebook library lending pilot. Big-six publisher Macmillan, which has kept its ebooks out of libraries until now, is launching a pilot lending program, the company announced Thursday. 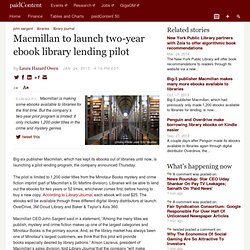 The pilot is limited to 1,200 older titles from the Minotaur Books mystery and crime fiction imprint (part of Macmillan’s St. Martins division). Libraries will be able to lend out the ebooks for two years or 52 times, whichever comes first, before having to buy a new copy. According to Library Journal, each ebook will cost $25. Note to publishers: Your addiction to DRM is killing you. PLA - If Books Are Our Brand. . . By Carson Block - librarylandtech@gmail.com on October 24, 2012 According to a 2010 Perceptions of Libraries study from OCLC, books remain the brand of the public library.1 Simply put, when people surveyed for the study think of the public library, they think book. 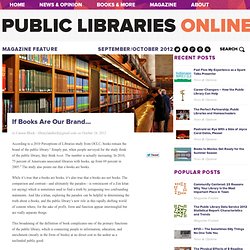 The number is actually increasing. In 2010, 75 percent of Americans associated libraries with books, up from 69 percent in 2005.2 The study also points out that e-books are books. Should Libraries Get Out of the eBook Business? Or get out at least until there is a better system? 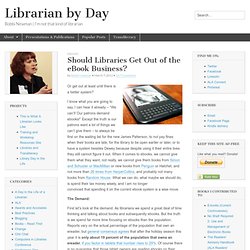 I know what you are going to say, I can hear it already – “We can’t! Our patrons demand ebooks!” Alternative Uses for the Pesky eBook Budget. Not happy with an eBook collection that has limited checkouts or paying three times the price for the “privilege”? 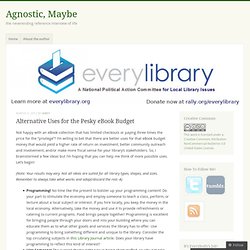 I’m willing to bet that there are better uses for that eBook budget money that would yield a higher rate of return on investment, better community outreach and involvement, and/or make more fiscal sense for your library’s stakeholders. So, I brainstormed a few ideas but I’m hoping that you can help me think of more possible uses. Let’s begin! Stop Branding Your Library!! Ok, so I’m totally going to admit when I’m wrong but in my defense it wasn’t my fault. 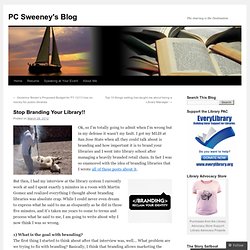 I got my MLIS at San Jose State when all they could talk about is branding and how important it is to brand your libraries and I went into library school after managing a heavily branded retail chain. In fact I was so enamored with the idea of branding libraries that I wrote all of these posts about it. But then, I had my interview at the library system I currently work at and I spent exactly 5 minutes in a room with Martin Gomez and realized everything I thought about branding libraries was absolute crap. 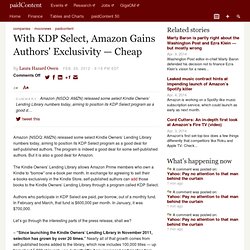 The program is indeed a good deal for some self-published authors. But it is also a good deal for Amazon. The Kindle Owners’ Lending Library allows Amazon Prime members who own a Kindle to “borrow” one e-book per month. Why Book Publishing Can Survive Digital Age: Echoes. Justice Department Threatens Apple, Publishers over E-Book Pricing. Did you notice that e-books became a little more expensive after Apple entered the game with iBooks? 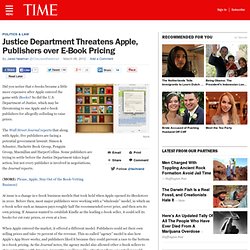 So did the U.S. Department of Justice, which may be threatening to sue Apple and e-book publishers for allegedly colluding to raise prices. The Wall Street Journal reports that along with Apple, five publishers are facing a potential government lawsuit: Simon & Schuster, Hachette Book Group, Penguin Group, Macmillan and HarperCollins. Some publishers are trying to settle before the Justice Department takes legal action, but not every publisher is involved in negotiations, the Journal reports. Pick your monopoly: Apple or Amazon. Could a little anti-competitive behavior actually be pro-competitive? 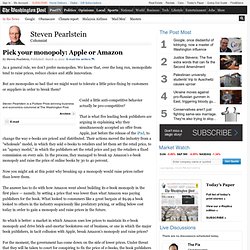 That is what five leading book publishers are arguing in explaining why they simultaneously accepted an offer from Apple, just before the release of the iPad, to change the way e-books are priced and distributed. Their actions moved the industry from a “wholesale” model, in which they sold e-books to retailers and let them set the retail price, to an “agency model,” in which the publishers set the retail price and pay the retailers a fixed commission on every sale. In the process, they managed to break up Amazon’s e-book monopoly and raise the price of online books by 30 to 40 percent. Scott Turow of the Authors Guild on e-book price collusion investigation. Photo by Elisabetta Villa/Getty Images Last Friday, I wrote about a Wall Street Journal report alleging that the Department of Justice had warned Apple and five book publishers about price collusion over e-books. 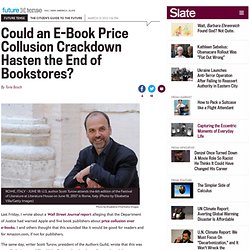 Justice Dept. Investigating Apple & “Big Six” On eBook Pricing - eBookNewser. If the government makes agency go away. The Wall Street Journal reports that the Justice Department has notified the Agency Five (Hachette, HarperCollins, Macmillan, Penguin, and Simon & Schuster) and Apple that it plans to sue them for colluding to raise the price of electronic books. 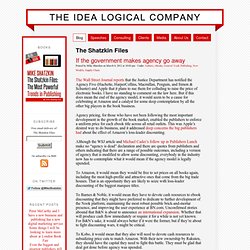 I have no standing to comment on the law here. The rise of e-reading. Released: April 4, 2012 By Lee Rainie, Kathryn Zickuhr, Kristen Purcell, Mary Madden and Joanna Brenner One-fifth of American adults (21%) report that they have read an e-book in the past year, and this number increased following a gift-giving season that saw a spike in the ownership of both tablet computers and e-book reading devices such as the original Kindles and Nooks. In mid-December 2011, 17% of American adults had reported they read an e-book in the previous year; by February, 2012, the share increased to 21%. The rise of e-books in American culture is part of a larger story about a shift from printed to digital material.

Using a broader definition of e-content in a survey ending in December 2011, some 43% of Americans age 16 and older say they have either read an e-book in the past year or have read other long-form content such as magazines, journals, and news articles in digital format on an e-book reader, tablet computer, regular computer, or cell phone. Key findings: Bowker Releases Results of Global eBook Research. Bowker Releases Results of Global eBook Research Australia, India, the U.K. and the U.S. lead the way in adoption; Brazil and India set for greatest growth London, UK - March 27, 2012 - Australia, India, the U.K. and the U.S. are leading the world in e-book adoption rates, according to Bowker Market Research’s Global eBook Monitor, The study tracks consumer attitudes to and purchasing of e-books in major world markets.

28% Of U.S. Adults Read On eReader Or Tablet - eBookNewser. AAP Reports eBook Sales up 72% in December - eBookNewser. A Guide to Publishers in the Library Ebook Market. Last updated July 6 The ebook library lending policies of the Big Six publishers garner most of the attention, because public libraries regard access to best-selling titles as a critical service.

However, it may help to scan the landscape not only for the “Big Six” trade publishers but also for the “fairly large” and the “not so big” and the “further afield” in order to get a fuller sense of publishers’ participation in the overall library marketplace. The list is meant to be a helpful, not comprehensive, resource. The focus is whether or not publishers are in the library ebook marketplace. How to Talk to Your Patrons About Penguin & Other Publishers Not Loaning eBooks to Libraries. [edited 2/11/2012] I feel I need to clarify that Penguin did not stop doing business with libraries, they stopped doing business with OverDrive, read more here. And how to get them to talk to the Publishers. I’ve had this post in my drafts for a long time. What book publishers should learn from Harry Potter. After months of anticipation, the e-book versions of author J.K.

Rowling’s phenomenally successful Harry Potter series are now available through Rowling’s Pottermore online unit, and as my PaidContent colleague Laura Owen has noted in her post on the launch, Rowling has chosen to do a number of interesting things with her e-books, including releasing them without digital-rights management restrictions.