M.imdb. The Last Duel. The Last Duel is a cinematic and thought-provoking drama set in the midst of the Hundred Years War that explores the ubiquitous power of men, the frailty of justice and the strength and courage of one woman willing to stand alone in the service of truth. 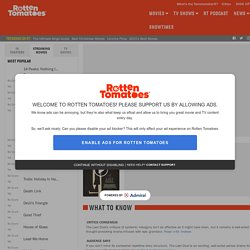 Based on actual events, the film unravels long-held assumptions about France's last sanctioned duel between Jean de Carrouges and Jacques Le Gris, two friends turned bitter rivals. Carrouges is a respected knight known for his bravery and skill on the battlefield. Le Gris is a Norman squire whose intelligence and eloquence make him one of the most admired nobles in court. When Carrouges' wife, Marguerite, is viciously assaulted by Le Gris, a charge he denies, she refuses to stay silent, stepping forward to accuse her attacker, an act of bravery and defiance that puts her life in jeopardy. Criminal: UK. M.imdb. M.imdb. Mayor of Kingstown (TV Series 2021– ) The Wheel of Time (TV Series 2021– ) 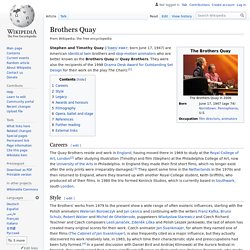 They were also the recipients of the 1998 Drama Desk Award for Outstanding Set Design for their work on the play The Chairs.[1] Careers[edit] Style[edit] Most of their animation films feature puppets made of doll parts and other organic and inorganic materials, often partially disassembled, in a dark, moody atmosphere. Perhaps their best known work is Street of Crocodiles (1986), based on the short novel of the same name by the Polish author and artist Bruno Schulz. Lamb (2021) Thousand Fangs (TV Series 2021– ) Alice in Borderland (TV series) 2020 Japanese Netflix television series Alice in Borderland (Japanese: 今際の国のアリス, Hepburn: Imawa no Kuni no Arisu) is a 2020 Japanese science fiction suspense-thriller drama streaming television series based on the manga of the same name by Haro Aso. 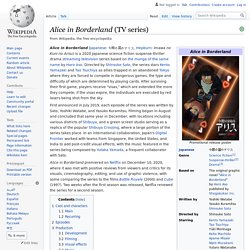 Directed by Shinsuke Sato, the series stars Kento Yamazaki and Tao Tsuchiya as allies trapped in an abandoned Tokyo where they are forced to compete in dangerous games, the type and difficulty of which are determined by playing cards. Yellowstone (TV Series 2018– ) Arcane (TV Series 2021– ) M.imdb. Annihilation (film) Berberian Sound Studio. 2012 British film Plot[edit] As time passes, and Gilderoy feels more and more disconnected from his mother at home, he begins to fear he's out of his depth. 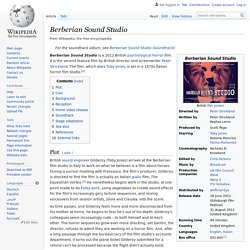 Gilderoy's colleagues seem increasingly rude – to both himself and to each other. The horror sequences grow ever more shocking, yet Santini, the director, refuses to admit they are working on a horror film. And, after a long passage through the bureaucracy of the film studio's accounts department, it turns out the plane ticket Gilderoy submitted for a refund can't be processed because the flight didn't actually exist. Sator (film) 2019 American film Sator is a 2019 American supernatural horror film written and directed by Jordan Graham and starring Michael Daniel, Rachel Johnson, Aurora Lowe, Gabriel Nicholson and June Peterson. 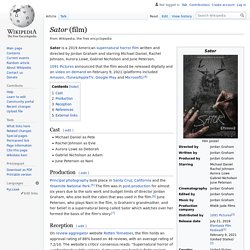 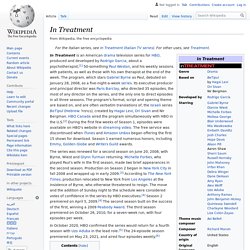 Michelle Forbes, who played Paul's wife in the first season, made two brief appearances in the second season. Production on Season 2 began in New York City in fall 2008 and wrapped up in early 2009.[3] According to The New York Times, production relocated to New York from Los Angeles at the insistence of Byrne, who otherwise threatened to resign. The move and the addition of Sunday night to the schedule were considered votes of confidence in the series by HBO executives.[4] Season 2 premiered on April 5, 2009.[4] The second season built on the success of the first, winning a 2009 Peabody Award.

The third season premiered on October 26, 2010, for a seven-week run, with four episodes per week. Plot[edit] Set in Baltimore,[4] psychotherapist Paul Weston has a private practice where he carries out sessions with his patients in his home. Characters[edit] Our Boys (miniseries) American Israeli miniseries Our Boys (Hebrew: הנערים‎, Arabic: فتیان‎) is an American-Israeli television miniseries created by Hagai Levi, Joseph Cedar, and Tawfik Abu-Wael. 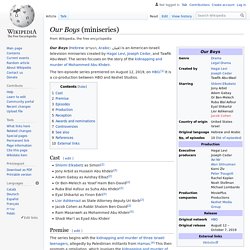 The series focuses on the story of the kidnapping and murder of Mohammed Abu Khdeir. Israeli television. Scenes from a Marriage (TV Mini Series 2021– ) I May Destroy You. British television series According to Metacritic, I May Destroy You was the most critically acclaimed television programme of 2020,[4] and was described by The New York Times as "the perfect show for an anxious world. 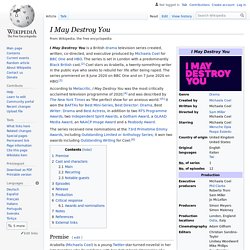 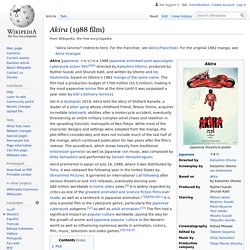 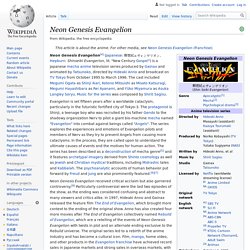 "New Century Gospel") is a Japanese mecha anime television series produced by Gainax and animated by Tatsunoko, directed by Hideaki Anno and broadcast on TV Tokyo from October 1995 to March 1996. The cast included Megumi Ogata as Shinji Ikari, Kotono Mitsuishi as Misato Katsuragi, Megumi Hayashibara as Rei Ayanami, and Yūko Miyamura as Asuka Langley Soryu. The Power of the Dog (2021) I Think You Should Leave with Tim Robinson (TV Series 2019– ) - IMDb. Naboer (2005) Vigil (TV Series 2021– ) Annette. Holy Motors. 2012 film by Leos Carax Holy Motors is a 2012 fantasy drama film written and directed by Leos Carax, starring Denis Lavant and Édith Scob. Lavant plays Mr Oscar, a man who appears to have a job as an actor, who inhabits several different roles a day, but there are no cameras filming the man's performances or audiences watching.[4] It is Carax's first feature film since 1999.

M.imdb. Reservation Dogs (TV Series 2021– ) M.imdb. M.imdb. Thirst (2009 film) 2009 South Korean film Sang-hyun (Song Kang-ho) is a Catholic priest who volunteers at the hospital, providing ministry to the patients. He is well respected for his unwavering faith and dedicated service, but he secretly suffers from feelings of doubt and sadness. Sang-hyun volunteers to participate in an experiment to find a vaccine for the deadly Emmanuel Virus (EV). Although the experiment fails, and Sang-hyun is infected with the seemingly fatal disease, he makes a complete and rapid recovery after receiving a blood transfusion. News of his marvelous recovery quickly spreads among the devout parishioners of Sang-hyun's congregation, and they begin to believe that he has a miraculous gift for healing. At first, Sang-hyun feels a newfound vigor but soon he is aghast to find himself drinking blood from a comatose patient.

The documentary is split into five parts. It begins by examining how Iceland was highly deregulated in 2000 and the privatization of its banks. When Lehman Brothers went bankrupt and AIG collapsed, Iceland and the rest of the world went into a global recession. At the Federal Reserve annual Jackson Hole conference in 2005, Raghuram Rajan, then the chief economist of IMF, warned about the growing risks in the financial system and proposed policies that would reduce such risks. During the housing boom, the ratio of money borrowed by an investment bank versus the bank's own assets reached unprecedented levels. The market for CDOs collapsed and investment banks were left with hundreds of billions of dollars in loans, CDOs, and real estate they could not unload. 7 šių metų filmai, kuriuos verta prisiminti.

With a length of 808 minutes excluding intermissions, it is the longest film in the history of Argentine cinema.[1][2] The film is a joint project by the production group El Pampero Cine and the acting company Piel de Lava, made up of actresses Elisa Carricajo, Valeria Correa, Pilar Gamboa, and Laura Paredes. It premiered at the Buenos Aires International Festival of Independent Cinema. Plot[edit] Joachim Trier. Animus Animalis (istorija apie žmones, žvėris ir daiktus) John Wick (film) Occupied. The Cleaners. Light of My life (2019) Years and Years (TV series) This Is The Scariest Part Of Netflix’s Veronica. Bridge of Spies (film) 2015 film directed by Steven Spielberg.