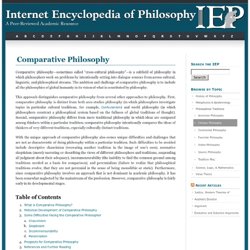 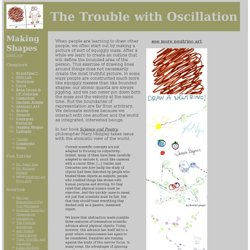 Indeed, many of them have been carefully adapted to exclude it, much like cameras with a colour filter. [...] Galileo and Descartes saw how badly the study of objects had been distorted by people who treated these objects as subjects, people who credited things like stones with human purpose and striving. So they ruled that physical science must be objective . And this quickly came to mean, not just that scientists must be fair, but that they should treat everything they studied only as a passive, insentient object. We know that abstraction made possible three centuries of tremendous scientific advance about physical objects.

Space (mathematics) A hierarchy of mathematical spaces: The inner product induces a norm. 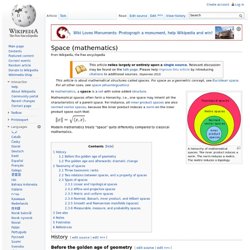 The norm induces a metric. The metric induces a topology. Modern mathematics treats "space" quite differently compared to classical mathematics. In the ancient mathematics, "space" was a geometric abstraction of the three-dimensional space observed in the everyday life. Axiomatic method had been the main research tool since Euclid (about 300 BC). The relation between the two geometries, Euclidean and projective,[4] shows that mathematical objects are not given to us with their structure.[5] Rather, each mathematical theory describes its objects by some of their properties, precisely those that are put as axioms at the foundations of the theory.[6] Loom. June 26, 2006: PowerLoom® snapshots built from our latest CVS sources are now available. 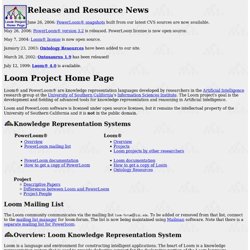 May 26, 2006: PowerLoom® version 3.2 is released. PowerLoom license is now open source. May 7, 2004: Loom® license is now open source. January 23, 2003: Ontology Resources have been added to our site. March 28, 2002: Ontosaurus 1.9 has been released! July 12, 1999: Loom® 4.0 is available. Loom® and PowerLoom® are knowledge representation languages developed by researchers in the Artificial Intelligence research group at the University of Southern California's Information Sciences Institute. Complexity Thinking. 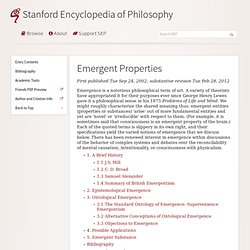 A variety of theorists have appropriated it for their purposes ever since George Henry Lewes gave it a philosophical sense in his 1875 Problems of Life and Mind. We might roughly characterize the shared meaning thus: emergent entities (properties or substances) ‘arise’ out of more fundamental entities and yet are ‘novel’ or ‘irreducible’ with respect to them. Speech Acts. First published Tue Jul 3, 2007 Speech acts are a staple of everyday communicative life, but only became a topic of sustained investigation, at least in the English-speaking world, in the middle of the Twentieth Century.[1] Since that time “speech act theory” has been influential not only within philosophy, but also in linguistics, psychology, legal theory, artificial intelligence, literary theory and many other scholarly disciplines.[2] Recognition of the importance of speech acts has illuminated the ability of language to do other things than describe reality.

In the process the boundaries among the philosophy of language, the philosophy of action, the philosophy of mind and even ethics have become less sharp. In addition, an appreciation of speech acts has helped lay bare an implicit normative structure within linguistic practice, including even that part of this practice concerned with describing reality. 1. Introduction. Unanswered Questions at Supernova 2007. I have been unusually quiet here recently because I have been going through a major transition. 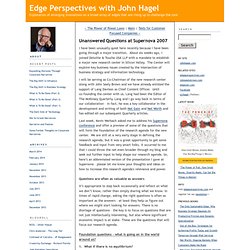 About six weeks ago, I joined Deloitte & Touche USA LLP with a mandate to establish a major new research center in Silicon Valley. The Center will explore key business issues created by the intersection of business strategy and information technology. I will be serving as Co-Chairman of the new research center along with John Seely Brown and we have already enlisted the support of Lang Davison as Chief Content Officer.

Until co-founding the center with us, Lang had been the Editor of The McKinsey Quarterly. 6 Alternatives To Bloom's Taxonomy For Teachers - This post is updated from an article we published in April. 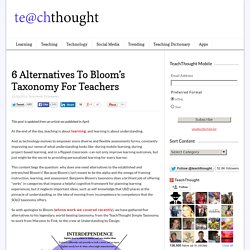 At the end of the day, teaching is about learning, and learning is about understanding. And as technology evolves to empower more diverse and flexible assessments forms, constantly improving our sense of what understanding looks like–during mobile learning, during project-based learning, and in a flipped classroom–can not only improve learning outcomes, but just might be the secret to providing personalized learning for every learner. This content begs the question: why does one need alternatives to the established and entrenched Bloom’s? Five routes to more innovative problem solving. Rob McEwen had a problem. 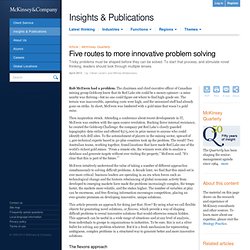 The chairman and chief executive officer of Canadian mining group Goldcorp knew that its Red Lake site could be a money-spinner—a mine nearby was thriving—but no one could figure out where to find high-grade ore. The terrain was inaccessible, operating costs were high, and the unionized staff had already gone on strike.