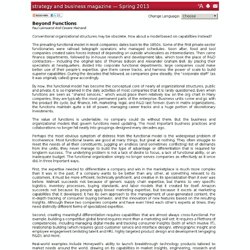 How about a model based on capabilities instead? The prevailing functional model in most companies dates back to the 1850s. Some of the first private-sector functionaries were railroad telegraph operators who managed schedules. Soon after, food and tool companies created sales forces instead of depending on outside wholesalers as intermediaries.

Then came finance departments, followed by in-house research and development labs, which took the place of R&D contractors— including the original labs of Thomas Edison and Alexander Graham Bell. By now, the functional model has become the conceptual core of nearly all organizational structures, public and private. The value of functions is undeniable; no company could do without them. Perhaps the most obvious symptom of distress from the functional model is the widespread problem of incoherence. The most common solution used today is the cross functional team. Resources. Scio - Center - Costa Model. Lips.informatik.uni-leipzig.de/files/Brckmann2008AMABULOAModelArchitectureforBusinessLogic.pdf. Powered by LIthyem Industries and ZeroG Labs.

Bemco. InSITE07p151-170Brits297. The (Re)birth of the Architect for the Business Model Design. Business model both in new designs and it management have become centre stage in many of our existing organizations’ thinking. 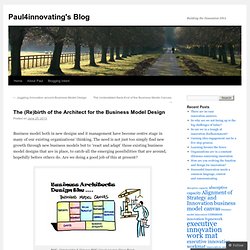 The need is not just too simply find new growth through new business models but to ‘react and adapt’ those existing business model designs that are in place, to catch-all the emerging possibilities that are around, hopefully before others do. Are we doing a good job of this at present? BMC- Osterwalder & Pigneur. BMC Visual source: Steve Blank Those without a legacy or are really agile usually are in pole position to explore new opportunities quickly.

The entrepreneur has a great chance to pioneer, to quickly expand and seize those opportunities to disrupt those occupants serving a known market. The constraints within the existing organizations. Lean Canvas: Your Startup Blueprint. Gumroad. ER - EXPLORE. The Business Architect. The Business Capability Manager I am excited about Accelare’s new software product: The Capability Manager. 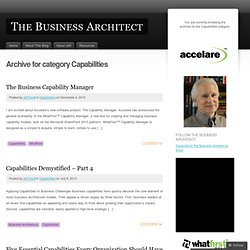 Accelare has announced the general availability of the WhatFirst™ Capability Manager, a new tool for creating and managing business capability models, built on the Microsoft SharePoint 2013 platform. WhatFirst™ Capability Manager is designed as a simple to acquire, simple to learn, simple to use […] Capabilities, WhatFirst Capabilities Demystified – Part 4 Applying Capabilities to Business Challenges Business capabilities have quickly become the core element of most business architecture models. Business Architecture, Capabilities Five Essential Capabilities Every Organization Should Have One of the biggest challenges in building capability models is getting people to move from functional thinking (the things we do) to capability thinking (the ability we have to do things). Introduction to the Value Reference Model (VRM)sm - Value Chain Group.

Understanding Business Models. When I first started to think about business models I came across this model developed by MIT which provides a good foundation for a systematic study of business models, by defining business models and distinguishing their different types. 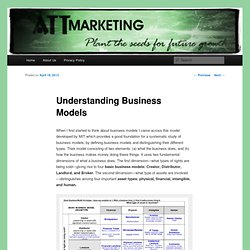 Their model consisting of two elements: (a) what the business does, and (b) how the business makes money doing these things. It uses two fundamental dimensions of what a business does. The first dimension—what types of rights are being sold—giving rise to four basic business models: Creator, Distributor, Landlord, and Broker. The second dimension—what type of assets are involved—distinguishes among four important asset types: physical, financial, intangible, and human. Copyright ©1994-2000 Massachusetts Institute of Technology andThe Center for Coordination Science. 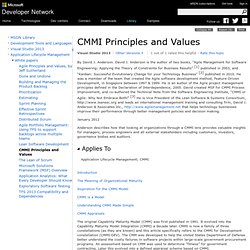 Anderson. David J. Anderson is the author of two books, “Agile Management for Software Engineering: Applying the Theory of Constraints for Business Results” [1] published in 2003, and “Kanban: Successful Evolutionary Change for your Technology Business” [2] published in 2010. He was a member of the team that created the Agile software development method, Feature-Driven Development, in Singapore between 1997 & 1999.

He is an author of the Agile project management principles defined in the Declaration of Interdependence, 2005. January 2012 Anderson describes how that looking at organizations through a CMMI lens provides valuable insights for managers, process engineers and all external stakeholders including customers, investors, governance bodies and auditors. Application Lifecycle Management; CMMI Introduction The Meaning of Organizational Maturity. Petri net. A Petri net (also known as a place/transition net or P/T net) is one of several mathematical modeling languages for the description of distributed systems. 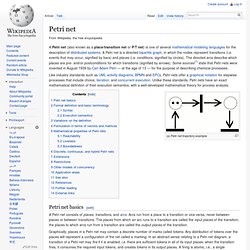 A Petri net is a directed bipartite graph, in which the nodes represent transitions (i.e. events that may occur, signified by bars) and places (i.e. conditions, signified by circles). The directed arcs describe which places are pre- and/or postconditions for which transitions (signified by arrows). Some sources[1] state that Petri nets were invented in August 1939 by Carl Adam Petri — at the age of 13 — for the purpose of describing chemical processes.

Like industry standards such as UML activity diagrams, BPMN and EPCs, Petri nets offer a graphical notation for stepwise processes that include choice, iteration, and concurrent execution. Unlike these standards, Petri nets have an exact mathematical definition of their execution semantics, with a well-developed mathematical theory for process analysis. Empower business users with collective learning to model their business with IBM Blueworks Live and IBM Industry Models. Introduction Business stakeholders often face what amounts to a blank canvas on which to paint their enterprise initiatives. 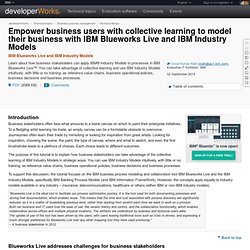 To a fledgling artist learning his trade, an empty canvas can be a formidable obstacle to overcome. Journeymen often learn their trade by mimicking or looking for inspiration from great artists. Looking for inspiration, choosing the scene, the paint, the type of canvas, where and what to sketch, and even the first brushstroke leads to a plethora of choices.