Is Greed Ever Good? How Computers Are Creating a Second Economy Without Workers - Bill Davidow - Business. Call it the post-employee economy: The digital revolution is creating billions of dollars of wealth in a second world without people Mikulich Alexander Andreevich / Shutterstock When the disappointing jobs numbers were reported last week (employers added 120,000 jobs in March, about half the number reported in the two previous months), analysts tripped over themselves looking for an explanation. 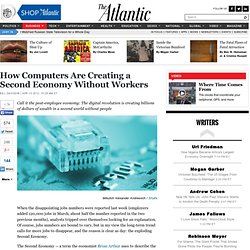 Of course, jobs numbers are bound to vary, but in my view the long-term trend calls for more jobs to disappear, and the reason is clear as day: the exploding Second Economy. The Second Economy -- a term the economist Brian Arthur uses to describe the computer-intensive portion of the economy -- is, quite simply, the virtual economy. One of its main byproducts is the replacement of low-productivity workers with computers. Unfortunately, the Second Economy will not create many jobs. Have we arrived at a financial singularity? - Finance Addict : Finance Addict. A couple of things have happened recently that beg the question: do we truly understand the risks that our largest banks are taking? 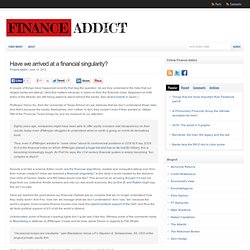 (And this matters because, 4 years on from the financial crisis, taxpayers on both sides of the Atlantic are still being asked to stand behind the banks. See recent events in Spain.) Behavioural Economics - A Crash Course (Joe Pomykala) What if preferences are unstable? A good rule of thumb, though not always true, is this: Modern ("neoclassical") economic theory has been pretty successful at describing people's decision-making patterns in static settings, but not so good at describing how people make decisions in dynamic settings. 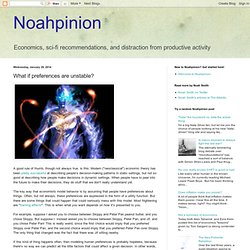 When people have to peer into the future to make their decisions, they do stuff that we don't really understand yet. For example, suppose I asked you to choose between Skippy and Peter Pan peanut butter, and you chose Skippy. But suppose I instead asked you to choose between Skippy, Peter Pan, and Jif, and you chose Peter Pan! It's Growthism, and It's Bad for Us - Umair Haque. You know the alien cults that announce to their followers that next year, on October 28th, at precisely 4:05 pm, the master race will arrive, and save humanity? 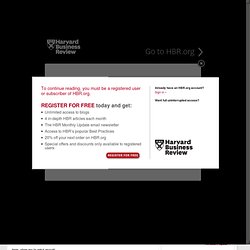 Of course, the aliens never arrive. But that doesn’t stop the cult from believing. It only strengthens their belief. If, as I’d bet you do, you’re head-shakingly familiar with said cults, allow me to ask you a question. Has capitalism failed? Why Debt and Money Created 'Out of Thin Air' Are Necessary, Not Evil. By Paul Solman Paul Solman sets the record straight on how he explains economics to himself and to his readers, tackling three different questions about the Federal Reserve, pictured above. 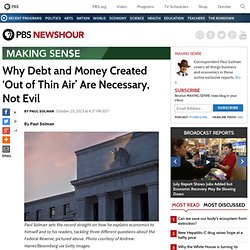 Photo courtesy of Andrew Harrer/Bloomberg via Getty Images. I am about to address three entirely reasonable questions concerning the Federal Reserve and its monetary policy. Evolutionary Economics And Darwin’s Wedge. Economics is in our nature. 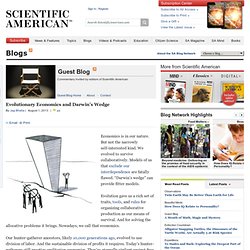 But not the narrowly self-interested kind. Grover Norquist Is Wrong About the Tea Party's Second Coming - Leslie Marshall. This past Sunday, on NBC's Meet The Press, Grover Norquist had a warning for the president, Democrats, the nation, and perhaps the world: If America ends up going over the "fiscal cliff" there will be a Tea Party revival that will outweigh that of the 2010 midterm elections. 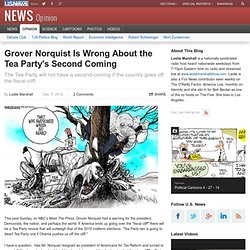 "Tea Party two is going to dwarf Tea Party one if Obama pushes us off the cliff. " Downturn and Legacy of Bush Policies Drive Large Current Deficits. Federal deficits and debt have been sharply higher under President Obama, but the evidence continues to show that the Great Recession, President Bush’s tax cuts, and the wars in Afghanistan and Iraq explain most of the deficits that have occurred on Obama’s watch — based on the latest Congressional Budget Office projections as well as legislation enacted since we last issued this analysis of what lies behind current deficits and debt. 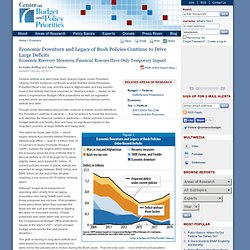 Though some lawmakers and pundits continue to blame record deficits on the President’s policies in general — and his actions to boost the economy and stabilize the financial system in particular — these policies increase budget deficits only briefly; they will have no significant impact on the long-term problem of large deficits and rising debt. Although longer-term pressures on spending stem chiefly from an aging population and rising health-care costs, those pressures are not new. Recession Caused Sharp Deterioration in Budget Outlook Technical Note. ‘Unclogging’ the Popular “CalculatedRisk” Employment Chart. Below the original version: The compact (‘unclogged’) version simplifies by averaging the 1953 through 1980 recessions.

The ones that are singled out have ‘special features’. The 1948 recession is characterized by a steep and deep employment fall, which reverses more quickly than average. How The Simpsons Disproves Everything I Believe About Economics. Conscious Capitalism: Can Empathy Change The World? ‘How Much Is Enough?’ by Robert Skidelsky and Edward Skidelsky. Why Is Job Growth Tepid?

The unemployment rate has been 8.2 percent for three months now, creating concern that we are in a high-unemployment equilibrium. 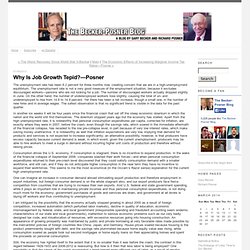 The unemployment rate is not a very good measure of the employment situation, because it excludes discouraged workers—persons who are not looking for a job. The number of discouraged workers actually dropped slightly in June. On the other hand, the number of underemployed workers rose slightly, causing the total of un- and underemployed to rise from 14.8 to 14.9 percent. The LIBOR scandal: The rotten heart of finance. THE most memorable incidents in earth-changing events are sometimes the most banal. 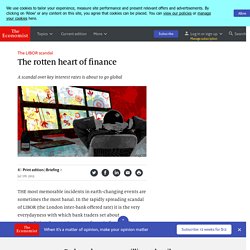 In the rapidly spreading scandal of LIBOR (the London inter-bank offered rate) it is the very everydayness with which bank traders set about manipulating the most important figure in finance. They joked, or offered small favours. “Coffees will be coming your way,” promised one trader in exchange for a fiddled number. “Dude. Who Needs Posner When You Have Mises and Hayek? BLS Jobs By Industry Treemap. The Rise of Innovative State Capitalism. Over the past five years, as much of the developed world has staggered through crisis, a new type of capitalism has emerged as a challenger to laissez-faire economics. Across much of the developing world, state capitalism—in which the state either owns companies or plays a major role in supporting or directing them—is replacing the free market.

By 2015 state-owned wealth funds will control some $12 trillion in assets, far outpacing private investors. From 2004 through 2009, 120 state-owned companies made their debut on the Forbes list of the world’s largest corporations, while 250 private companies fell off it. State companies now control about 90 percent of the world’s oil and large percentages of other resources—a far cry from the past, when BP (BP) and ExxonMobil (XOM) could dictate terms to the world. IT ALL BEGAN WITH A STRANGE EMAIL. It was late at night in October of last year when the strange email arrived. In fact, I only read it by accident and did not delete it by some miracle of fate. Before the Euro Crisis erupted in 2009, I was just another economics professor, minding my own little theoretical endeavours, writing obscure papers and esoteric books that only a few hundred nutcases around the world (like myself) would ever read, terribly satisfied in my very own academic cocoon.

Into the Future: Social Media Info Elevates Big Data Predictions. Your tweets do have meaning. To your family and friends, of course and maybe to some colleagues. But we are referring to a bigger meaning for your online musings, in the bundled and aggregated sense. Sophisticated investors and some government agencies are increasingly analyzing social media data to enhance their own statistical predictive capabilities. They are searching for patterns, trends and anomalies that may provide knowledge about the direction of various markets; for securities, for products, for services, for political outcomes and any other knowledge from which advantage can be derived.

Tweets, Facebook likes and shared articles are among the clues. Ed Dolan's Econ Blog » Inflation is Quiet, So Why are People Still Feeling its Pain? Author: Ed Dolan · · Share This Print This week’s report from the Bureau of Labor Statistics shows no change in the seasonally adjusted U.S. consumer price index for April. Real average hourly earnings were also unchanged.

On the face of it, those numbers should take inflation off the list of things people have to worry about, but they don’t. Instead, every time I post numbers that show inflation is low, I get comments like these: The Economy By the Numbers. Mypremiercreditcard - First PREMIER Bank 'First Premier Bank' is doing something awesome. They brought credit card named as mypremiercreditcard. By using this service of credit card we can not only able to pay the bills but can do a lot of things just head over to this link to understand what exactly I mean. Source - Inequality and Instability. Money/Feynman,_Rothbard,_and_the_Science_of_Economics - Brain Food. Who is the market? Sustainable Capitalism. Earlier this month, Generation Investment Management, a firm I co-founded along with David Blood, released a white paper on the importance of sustainable capitalism. The White Paper defines Sustainable Capitalism as a framework that seeks to maximize long-term economic value creation by reforming markets to address the real needs of all stakeholders while considering all costs.

The challenges facing the planet today are unprecedented and extraordinary; climate change, water scarcity, poverty, growing inequality of income and wealth, demographic shifts, and a global economy in a state of constant dramatic volatility and flux, to name but a few. Memo To Political Bloggers: Please Stop Writing About Economics; You Really Suck At It. Nanosecond Trading Could Make Markets Go Haywire. The afternoon of May 6, 2010 was among the strangest in economic history. The Neuroeconomics Revolution - Robert J. Shiller. Exit from comment view mode. Click to hide this space. The 1% are the very best destroyers of wealth the world has ever seen. PRAGMATIC CAPITALISM. Project Syndicate - the highest quality op-ed ( opinion-editorial ) articles and commentaries.