Gupea 2077 41673 1. Arduino Sverige. Wearables. 5 Maker Movement Tools That are Not 3D Printers. In my previous article on this subject, I wrote about the Maker Movement and its importance to the educational realm. 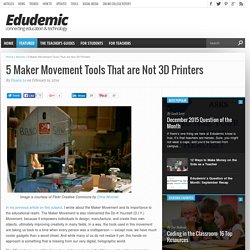 8 key take-aways from our new report on makerspaces. This week the RSA publishes a new report that attempts to make sense of makerspaces – why they are emerging, what impact they are having on their users and communities, and what challenges they are likely to face in the future. 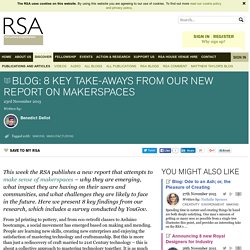 Here we present 8 key findings from our research, which includes a survey conducted by YouGov. 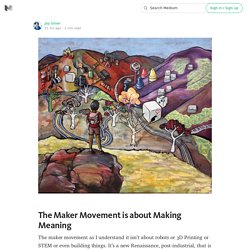 Därför hoppar Intel och Microsoft på makertåget · Summa. Litteraturlista Makerkultur. Inköp. Laser Cutting Basics : How Do Laser Cutters Work? There are a few different types of laser cutters, but they all essentially use the same process of using a laser to cut material. 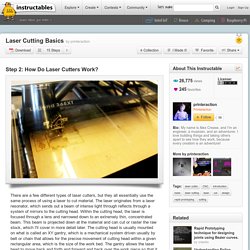 The laser originates from a laser resonator, which sends out a beam of intense light through reflects through a system of mirrors to the cutting head. Within the cutting head, the laser is focused through a lens and narrowed down to an extremely thin, concentrated beam. This beam is projected down at the material and can cut or raster the raw stock, which I'll cover in more detail later. The cutting head is usually mounted on what is called an XY gantry, which is a mechanical system driven usually by belt or chain that allows for the precise movement of cutting head within a given rectangular area, which is the size of the work bed. Want to Get More Girls Into STEM? Give Them Real-World Work. In an effort to encourage girls’ interest in STEM, a high school in Massachusetts is giving students a chance to apply their skills at the school’s help desk. 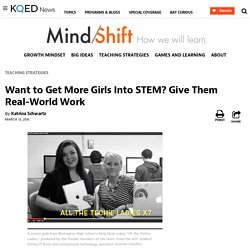 Students can join, regardless of their tech savviness, and learn on the job. The program’s combination of strong, fun, female role models and hands-on learning has helped boost girls’ confidence and excitement about tech. The all-student run Help Desk is part of Burlington High School’s Student Technology Innovation and Integration course. If any student or teacher at Burlington has a tech issue, it’s a student who solves it for them. Wearables - Maker Camp. An Illustrated Introduction to the Raspberry Pi. Suppose you happened to have a screw driver and you opened up your laptop, and then you looked at all the stuff that is inside, you would find a few printed circuit boards (PCBs) and some other components. 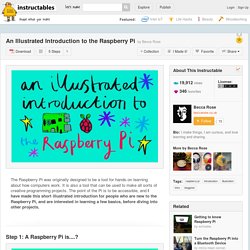 The PCB at the heart of your laptop or desktop is called the motherboard. It includes the central processing unit (CPU) and memory. It may also have an assortment of other components - for example, input devices, slots for connecting more boards (known as PCI), USB ports, network adapters, audio ports, graphics cards, and cooling fans - depending on how fancy the computer is. The Raspberry Pi is just like the main PCB that is inside your laptop. It is the heart of a computer on a tiny board. Laser Cutting Basics. A laser cutter is a prototyping and manufacturing tool used primarily by engineers, designers, and artists to cut and etch into flat material. 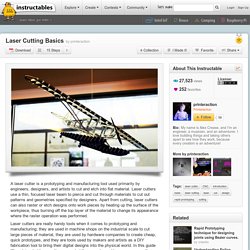 Laser cutters use a thin, focused laser beam to pierce and cut through materials to cut out patterns and geometries specified by designers. Apart from cutting, laser cutters can also raster or etch designs onto work pieces by heating up the surface of the workpiece, thus burning off the top layer of the material to change its appearance where the raster operation was performed. Laser cutters are really handy tools when it comes to prototyping and manufacturing; they are used in machine shops on the industrial scale to cut large pieces of material, they are used by hardware companies to create cheap, quick prototypes, and they are tools used by makers and artists as a DIY fabrication tool to bring their digital designs into the physical world. 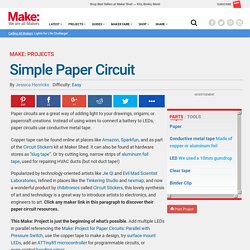 Instead of using wires to connect a battery to LEDs, paper circuits use conductive metal tape. Copper tape can be found online at places like Amazon, Sparkfun, and as part of the Circuit Stickers kit at Maker Shed. It can also be found at hardware stores as “slug tape“. Or try cutting long, narrow strips of aluminum foil tape, used for repairing HVAC ducts (but not duct tape!) Encouraging Girls to Hack and Make. I first got interested in engineering and technology 30 years ago when I was in 5th grade. 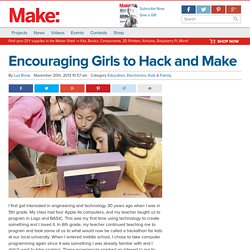 My class had four Apple IIe computers, and my teacher taught us to program in Logo and BASIC. This was my first time using technology to create something and I loved it. In 6th grade, my teacher continued teaching me to program and took some of us to what would now be called a hackathon for kids at our local university. When I entered middle school, I chose to take computer programming again since it was something I was already familiar with and I didn’t want to take cooking.

KodTipset. The maker movement: A learning revolution. By Sylvia Martinez and Gary Stager 7/21/2014 Topics: Maker movement, Project-based learning The impulse to create is one of the most basic human drives. As far back as the Stone Age, we were using materials in our environment to fashion tools for solving the problems we encountered. And in the millions of years since then, we have never stopped creating. In fact, the rise of civilization is largely defined by the progress of technology of one kind or another. Today, the availability of affordable constructive technology and the ability to share online has fueled the latest evolutionary spurt in this facet of human development. Welcome to the maker movement. Hackerspaces and Homeschooling: Making ‘Startup Schools’ The rapid growth of learning to code clubs, makerspaces, hackerspaces and even makercities has been remarkable. 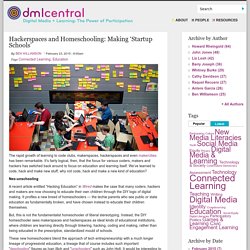 It’s fairly logical, then, that the focus for various coders, makers and hackers has switched back around to focus on education and learning itself. Välkommen till Kodcentrum – Kodcentrum. Hackschooling Makes Me Happy: Logan LaPlante at TEDxUniversityofNevada. How to Turn Your School Into a Maker Haven. Exploratorium/Flickr One of the best ways for frustrated parents, students and teachers to convince school leaders that it’s time for a reboot is with amazing student work. An unconventional learning community of “makers” — people who like to figure out and fix problems with their hands — stands ready to demonstrate a hands-on learning style in which students engage problems that matter to them, taking agency and displaying creativity along the way.

The Maker Movement is slowly infiltrating schools across the country with the help of dedicated educators and inspirational students proving with their creations that they can do incredible things when given a chance. Gamification.