A1 Alliance - Now Recruiting Solforge Playtesters! A1 Alliance Successful competitors with any background in TCGs and DCGs understand the importance of having strong, active, and efficient playtest groups. 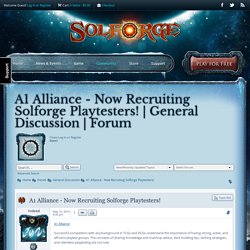 The concepts of sharing knowledge and matchup advice, deck building tips, teching strategies, and relentless playtesting are not new. For those who don’t know me, I play under the IGN 1ndeed. A long time ago, I joined a guild called A1 ALLIANCE for the DCG “Shadow Era", and continue to be active in my guild. If you have played Shadow Era, then you are no doubt familiar with A1 Alliance. I am happy to say that since the launch of Shadow Era, the members of the A1 Alliance have maintained remarkable tournament results, including World Championship wins and runner-ups.

A1 has only grown stronger as it has expanded to include other games that our members are interested in. Our Solforge community is in need of talented and active contributors. Our objectives are as follows: To contribute to the game and to the Solforge community. 1ndeed. SolForge. Home of the Kadras Volunteer Fire Department. Specific Card Analysis #12 (Wegu, The Ancient) [Insert Wagyu joke here]. 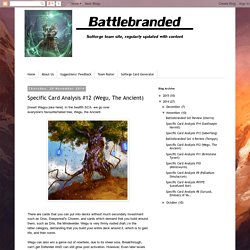 In the twelfth SCA, we go over everyone's favourite/hated tree, Wegu, the Ancient. There are cards that you can put into decks without much secondary investment such as Oros, Deepwood's Chosen, and cards which demand that you build around them, such as Drix, the Mindwelder. Wegu is very firmly rooted (hah.) in the latter category, demanding that you build your entire deck around it, which is to gain life, and then some. Wegu can also win a game out of nowhere, due to its sheer size, Breakthrough, can't get Defender AND can still grow post activation. However, Even later levels of Wegu might be dangerous to put down if you can't make it large in the same turn, not to mention hard removal leaves (hah.) That said, Wegu is still a powerful win condition that can end the game in very few turns, demanding an answer at every point in the game. 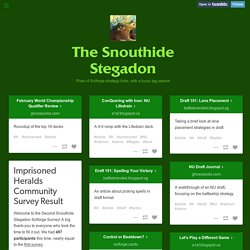 A big thank-you to everyone who took the time to fill it out. We had 497 participants this time, nearly equal to the first survey. I’ll present the findings and share my musings on the results. It’s important to remember that those who participated are not just Solforge players, but players who are relatively active in the online community. Unless a friend sent you the link, you wouldn’t have seen the survey if you didn’t visit one of the more popular Solforge sites. 1. Most of us are in our 20s or 30s. 2. Solforge is still a sausage fest. 3. This question bombed at the last minute. 4. Interesting how back-heavy this result was. 5. Not a surprising result, the graph could also mirror stability and performance on each platform. 6. I thought this would be a curious gauge of community retention. 7. The ratio is roughly unchanged since the summer. 8. Random Timed and Keep-yer-cards Draft are fan favorites. 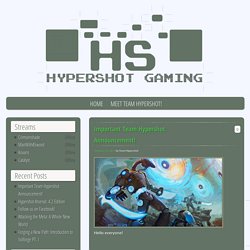 Things have been super busy here at Hypershot gaming. As some of you may have noticed, we have barely done any sort of streaming in the past 3 or so weeks. This is because of some exciting news that we have been very anxious to share with everyone! Let me start with the first bit of news. As of a few weeks ago, Myself (Crimsonshade), Kevin (Catalyst), and Cullen (Kovaris) have joined the Volunteer Quality Assurance Team for SolForge! We also have a couple of new recruits for Team Hypershot! Our first new recruit is Blargplean! Our second new recruit is the one, the only, the amazing Kit!

Thank you to everyone who has supported us, and continues to support us, through these changes. Thanks for reading, Alex Lamminen “Crimsonshade”