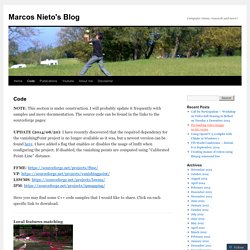 I will probably update it frequently with samples and more documentation. The source code can be found in the links to the sourceforge pages: UPDATE (2014/08/20): I have recently discovered that the required dependency for the vanishingPoint project is no longer available as it was, but a newest version can be found here. I have added a flag that enables or disables the usage of lmfit when configuring the project. If disabled, the vanishing points are computed using “Calibrated Point-Line” distance. FFME: Here you may find some C++ code samples that I would like to share. Local features matching Detection and matching of local features for videos or live cameras. Vision Group - Prof. Jianxiong Xiao. Princeton Vision Toolkit (PVT) is an open-source software library including a diverse set of functions that are useful and non-trivial to implement for fast-prototyping in vision research and engineering. 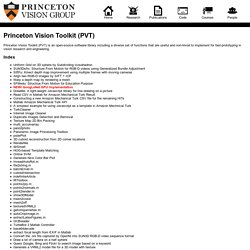 Index Uniform Grid on 3D sphere by Subdividing Icosahedron In many applications, we need to put a unform grid on a 3D sphere, or samples uniformly distributed on a unit sphere. For example, we want to approximate the 3D rotation space by unformly discretizing the sphere space for the 3D rotation axis, to be used as label space in a histogram of orientation, Markove Random Field or classifier, etc. icosahedron2sphere.m This function computes an icosahedron, and subdividing the triangles recursively to produce the uniform grid on a sphere. When you outgrow homework-code: a real CRF inference library to the rescue.

I have recently been doing some CRF inference for an object recognition task and needed a good ol' Max-Product Loopy Belief Propagation. 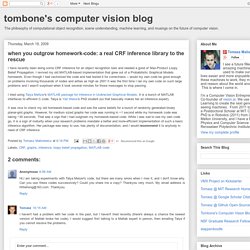 I revived my old MATLAB-based implementation that grew out of a Probabilistic Graphical Models homework. Even though I had vectorized the code and had tested it for correctness -- would my own code be good enough on problems involving thousands of nodes and arities as high as 200? It was the first time I ran my own code on such large problems and I wasn't surprised when it took several minutes for those messages to stop passing. I tried using Talya Meltzer's MATLAB package for inference in Undiracted Graphical Models. It is a bunch of MATLAB interfaces to efficient C code. Unsupervised Feature Learning and Deep Learning Tutorial. Matlab codes for dimensionality reduction. Rbg's home page. I finished my Ph.D. in computer vision at The University of Chicago under the supervision of Pedro Felzenszwalb in April 2012. 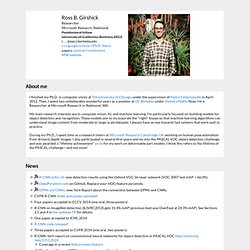 Then, I spent two unbelievably wonderful years as a postdoc at UC Berkeley under Jitendra Malik. Now, I'm a Researcher at Microsoft Research in Redmond, WA. My main research interests are in computer vision, AI, and machine learning. SIFT Flow: Dense Correspondence across Scenes and its Applications. IEEE Transactions on Pattern Analysis and Machine Intelligence, Vol. 33, No. 5, 2011 Introduction Image alignment, registration and correspondence are central topics in computer vision. 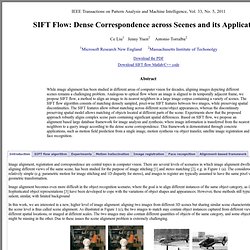 There are several levels of scenarios in which image alignment dwells. The simplest level, aligning different views of the same scene, has been studied for the purpose of image stitching [1] and stereo matching [2], e.g. in Figure 1 (a). The considered transformations are relatively simple (e.g. parametric motion for image stitching and 1D disparity for stereo), and images to register are typically assumed to have the same pixel value after applying the geometric transformation. CV CODE - Xiaojun Chang's Home Page. Software by Kevin Murphy and students. From 3D Scene Geometry to Human Workspace. Www.cs.cmu.edu/~dclee/code/index.html. Www.cs.cmu.edu/~dclee/code/index.html. Robust PCA. Robotic Bin-Picking - Ming-Yu Liu. Robotic Bin-Picking - Ming-Yu Liu. The Berkeley Segmentation Dataset and Benchmark. New: The BSDS500, an extended version of the BSDS300 that includes 200 fresh test images, is now available here. 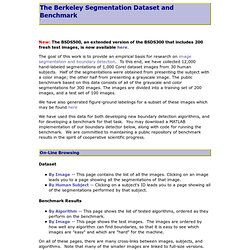 The goal of this work is to provide an empirical basis for research on image segmentation and boundary detection. To this end, we have collected 12,000 hand-labeled segmentations of 1,000 Corel dataset images from 30 human subjects. Half of the segmentations were obtained from presenting the subject with a color image; the other half from presenting a grayscale image. The public benchmark based on this data consists of all of the grayscale and color segmentations for 300 images. The images are divided into a training set of 200 images, and a test set of 100 images. Vision Group - Prof. Jianxiong Xiao. Free your Camera: 3D Indoor Scene Understanding from Arbitrary Camera Motion. 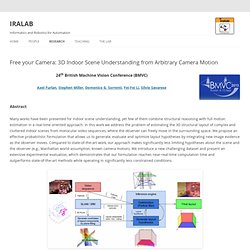 Sorrenti, Fei-Fei Li, Silvio Savarese Abstract Many works have been presented for indoor scene understanding, yet few of them combine structural reasoning with full motion estimation in a real-time oriented approach. In this work we address the problem of estimating the 3D structural layout of complex and cluttered indoor scenes from monocular video sequences, where the observer can freely move in the surrounding space.

Results. Estimating the Aspect Layout of Object Categories. In this project we seek to move away from the traditional paradigm for 2D object recognition whereby objects are identified in the image as 2D bounding boxes. 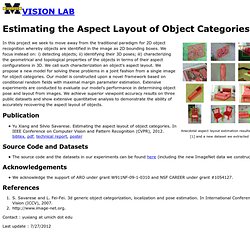 We focus instead on: i) detecting objects; ii) identifying their 3D poses; iii) characterizing the geometrical and topological properties of the objects in terms of their aspect configurations in 3D. We call such characterization an object's aspect layout. Data-Driven 3D Primitives. People Abstract What primitives should we use to infer the rich 3D world behind an image? 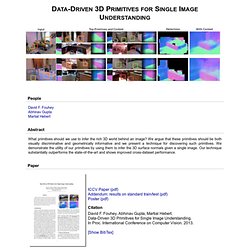 We argue that these primitives should be both visually discriminative and geometrically informative and we present a technique for discovering such primitives. We demonstrate the utility of our primitives by using them to infer the 3D surface normals given a single image. Active Contour Code. In the following you can find code for segmentation based on geometric/geodesic active contours. 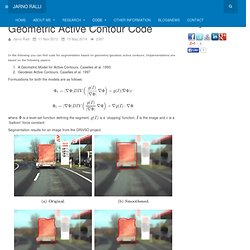 Implementations are based on the following papers: A Geometric Model for Active Contours, Caselles et al. 1993Geodesic Active Contours, Caselles et al. 1997 Formulations for both the models are as follows: where is a level-set function defining the segment, is a `stopping' function, is the image and is a `balloon' force constant. ScSR. Introduction Research on image statistics suggests that image patches can be well represented as a sparse linear combination of elements from an appropriately chosen over-complete dictionary.

Inspired by this observation, we seek a sparse representation for each patch of the low-resolution input, and then use the coefficients of this representation to generate the high-resolution output. Theoretical results from compressed sensing suggest that under mild conditions, the sparse representation can be correctly recovered from the downsampled signals. Category Independent Object Proposals, University of Illinois at Urbana-Champaign. Overview This work aims to provide a small pool of regions for an image, that are likely to contain every object in the image, regardless of category. News. Unsupervised Joint Object Discovery and Segmentation in Internet Images. CVPR 2013Unsupervised Joint Object Discovery and Segmentation in Internet ImagesAbstract We present a new unsupervised algorithm to discover and segment out common objects from large and diverse image collections.

In contrast to previous co-segmentation methods, our algorithm performs well even in the presence of significant amounts of noise images (images not containing a common object), as typical for datasets collected from Internet search. The key insight to our algorithm is that common object patterns should be salient within each image, while being sparse with respect to smooth transformations across other images. We propose to use dense correspondences between images to capture the sparsity and visual variability of the common object over the entire database, which enables us to ignore noise objects that may be salient within their own images but do not commonly occur in others. Markov Random Fields for Super-Resolution.

[Download the package] This is an implementation of the example-based super-resolution algorithm of [1]. Although the applications of MSFs have now extended beyond example-based super resolution and texture synthesis, it is still of great value to revisit this problem, especially to share the source code and examplar images with the research community. We hope that this software package can help to understand Markov random fields for low-level vision, and to create benchmark for super-resolution algorithms. When you refer to this code in your paper, please cite the following book chapter: W. Algorithm. Nonparametric Scene Parsing via Label Transfer. IEEE Transactions on Pattern Analysis and Machine Intelligence, Vol. 33, No. 12, December 2011 Ce Liu Microsoft Research New England Massachusetts Institute of Techonolgy [Webpage] [Download the PDF] Download the code and database. Unsupervised Joint Object Discovery and Segmentation in Internet Images.