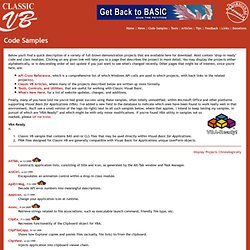 Most contain "drop-in ready" code and class modules. Clicking on any given link will take you to a page that describes the project in more detail. You may display the projects either alphabetically, or in descending order of last update if you just want to see what's changed recently. Other pages that might be of interest, since you're here, are: API Cross Reference, which is a comprehensive list of which Windows API calls are used in which projects, with back links to the related project(s). Classic VB Articles, where many of the projects described below are written up more formally. Which might be with only minor modifications. VBA-Ready n. Classic VB sample that contains BAS and/or CLS files that may be used directly within Visual Basic for Applications. 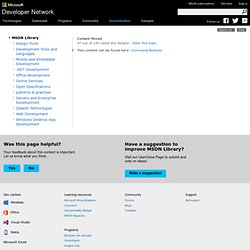 Visual Basic 6.0 Resource Center. Compatibility Between the 32-bit and 64-bit Versions of Office 2010. Summary: For customers working with 2GB or more of data, Microsoft Office 2010 is now available in a 64-bit version. 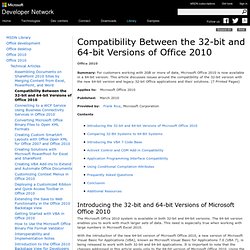 This article discusses issues around the compatibility of the 32-bit version with the new 64-bit version and legacy 32-bit Office applications and their solutions. (7 Printed Pages) Applies to: Microsoft Office 2010 Published: March 2010 Provided by: Frank Rice, Microsoft Corporation Contents. Windows Development. The topic you requested is included in another documentation set. 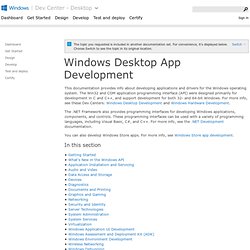 For convenience, it's displayed below. Choose Switch to see the topic in its original location. This documentation provides info about developing applications and drivers for the Windows operating system. The Win32 and COM application programming interface (API) were designed primarily for development in C and C++, and support development for both 32- and 64-bit Windows.

For more info, see these Dev Centers: Windows Desktop Development and Windows Hardware Development. Visual Basic 6.0 Resources. Creating a Data Consumer. In this section, we’ll walk step-by-step through the process of creating a data-aware class that acts as a data consumer. 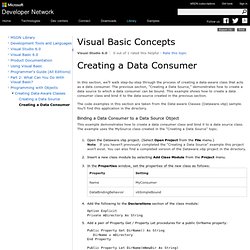 The previous section, "Creating a Data Source," demonstrates how to create a data source to which a data consumer can be bound. Visual Basic 6 (VB6) Data Types, Modules and Operators. Visual Basic uses building blocks such as Variables, Data Types, Procedures, Functions and Control Structures in its programming environment. 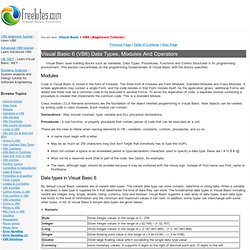 This section concentrates on the programming fundamentals of Visual Basic with the blocks specified. Modules Code in Visual Basic is stored in the form of modules. The three kind of modules are Form Modules, Standard Modules and Class Modules. A simple application may contain a single Form, and the code resides in that Form module itself. Class module (.CLS filename extension) are the foundation of the object oriented programming in Visual Basic. Declarations : May include constant, type, variable and DLL procedure declarations. Procedures : A sub function, or property procedure that contain pieces of code that can be executed as a unit. These are the rules to follow when naming elements in VB - variables, constants, controls, procedures, and so on: How to make a transparent form in VB 6.0 - Software Development. 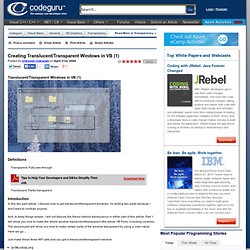 I'm writing two parts because I don't want to confuse anyone. And, to keep things simple, I will not discuss the theory behind translucency in either part of this article. Just make these three API calls and you get a translucent/transparent window: GetWindowLongSetWindowLongSetLayeredWindowAttributes GetWindowLong returns the window's attributes. Public Declare Function GetWindowLong Lib "user32" Alias"GetWindowLongA" (ByVal hwnd As Long, ByVal nIndex As Long) As Long hwnd : Handle to window(VB Form) ex. 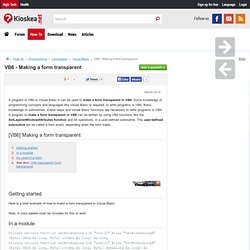 Some knowledge of programming concepts and languages like Visual Basic is required, to write programs in VB6. Basic knowledge of subroutines, if-else loops and Visual Basic functions are necessary to write programs in VB6. A program to make a form transparent in VB6 can be written by using VB6 functions like the SetLayeredWindowAttributes function and bit operations, in a user-defined subroutine. This user-defined subroutine will be called a form event, depending when the form loads. Getting started.