Paul Southern's top 10 underground menaces. What is it about being underground that frightens us so much? 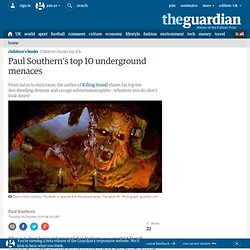 Growing up with science fiction. As a child my images of a fulfilled and complete grownup man consisted of Richard Briers in The Good Life, Horace Rumpole (of the Bailey) and Doctor Who. 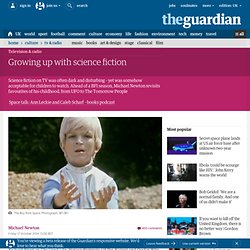 These days, what strikes me as curious is that Surbiton, the law courts and the Tardis all seemed equally fantastic and equally plausible locales. Adulthood, I assumed, was as likely to offer you alien planets as rhubarb wine at suburban dinner parties. And then the queen kissed the princess: fairytales get a modern makeover. Shlomo Sand: ‘I wish to resign and cease considering myself a Jew’ During the first half of the 20th century, my father abandoned Talmudic school, permanently stopped going to synagogue, and regularly expressed his aversion to rabbis. 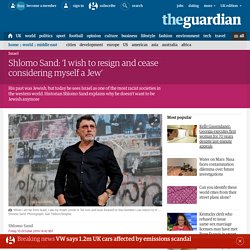 At this point in my own life, in the early 21st century, I feel in turn a moral obligation to break definitively with tribal Judeocentrism. I am today fully conscious of having never been a genuinely secular Jew, understanding that such an imaginary characteristic lacks any specific basis or cultural perspective, and that its existence is based on a hollow and ethnocentric view of the world. Mordor, he wrote: how the Black Country inspired Tolkien's badlands. “The country is very desolate everywhere. 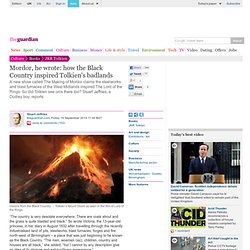 There are coals about and the grass is quite blasted and black.” So wrote Victoria, the 13-year-old princess, in her diary in August 1832 after travelling through the recently industrialised land of pits, steelworks, blast furnaces, forges and fire north-west of Birmingham – a place that was just beginning to be known as the Black Country. “The men, woemen (sic), children, country and houses are all black,” she added, “but I cannot by any description give an idea of its strange and extraordinary appearance.” Black women’s sexuality has always been overpoliced. Danièle Watts is an African-American actor who starred in Quentin Tarantino’s Oscar-nominated film Django Unchained, and is currently starring in Partners, a television show on FX.

She is also in a relationship with a white man, celebrity chef Brian Lucas, and she is alleging that the Los Angeles police department detained her last week for “showing affection” to him in a public place. Watts told BuzzFeed that she had been sitting in Lucas’s lap in the car, kissing. On his Facebook page, Lucas posted a photo of Watts crying, her hands handcuffed behind her back and wrote that the police “... saw a tatted RAWKer white boy and a hot bootie shorted black girl and thought we were HO (prostitute) and a TRICK (client).” “It was humiliating,” Watts said. The incident brings up the long and tortured history of the ways in which black female bodies are perceived and translated, especially when they are in close proximity with white bodies.

Are you a summer person? Because the autumn people are already winning. Summer officially ends on Monday and, with it, the wearing of white and that feeling of being on vacation all the time. 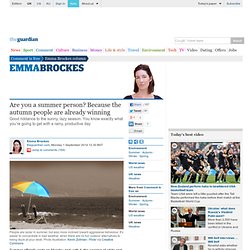 So, too, the ascendence of summer people over winter people. The calendar year runs January to January, but for many, that sinking, new-school-year feeling that comes around the first of September is the real start of the new year. How depressed the new season makes you – well, that depends largely on which season you think of as “yours”. I used to be a summer person. George Orwell 'mediocre'? Should we send Will Self to Room 101? A book that changed me: we want your choices. All this month we are asking writers, critics and bibliophiles to choose the book that changed them. 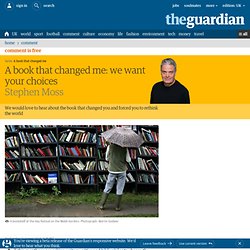 Colin Dexter, Margaret MacMillan, Owen Jones and Emma Brockes have already had their say; Andrew Motion, Diana Athill, David Kynaston, Linda Grant, Lucy Mangan and many others will be choosing their life-changing book over the coming weeks. The daily quiz: bells and whistles. Kim Dotcom: from playboy entrepreneur to political firebrand. Yubari, Japan: a city learns how to die. George RR Martin reveals why there's no gay sex in Game of Thrones.

George RR Martin: 'It's not a democracy. 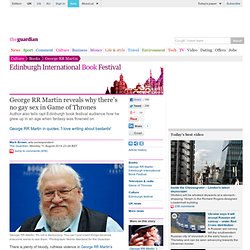 You can’t just insert things because everyone wants to see them.' Photograph: Murdo Macleod for the Guardian There is plenty of bloody, ruthless violence in George RR Martin's novels, and lots and lots of sex – but why is there more explicit gay and bisexual sex on display in the Game of Thrones TV adaptation than in his books? The question was asked as Martin addressed an audience at the Edinburgh international book festival on Monday night – why do his A Song of Ice and Fire novels only hint at the subject? I’m a woman with severe facial hair – and zero confidence as a result. I am a 43-year-old woman with two children who bring me a lot of joy, and a partner who is a devoted father, whom I love very much. 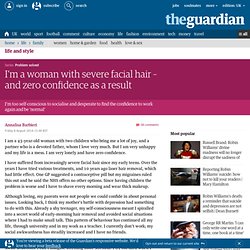 But I am very unhappy and my life is a mess. I am very lonely and have zero confidence. I have suffered from increasingly severe facial hair since my early teens. Over the years I have tried various treatments, and 10 years ago laser hair removal, which had little effect. The reader's editor on… the online abuse that follows any article on women's issues. It was one of the more striking remarks of last week, even though it was born out of the recognition of an unpleasant theme that runs through the web. 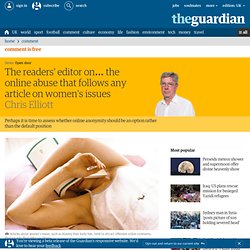 Charlie Leadbeater, a former adviser to the Labour government on the internet, was interviewed for the Guardian in connection with his report, A Better Web, for the Nominet Trust. What he sees as the pervasive misogyny of the web is an example of how the democratising potential of the internet has not been fulfilled. "I'd love to create something like the 'Mary Beard Prize for women online' to support people who are supporting women to be able to use the internet safely," he said in the article, which was published on 8 August. A great idea and one that would win support from many editors at the Guardian who see the amount of the moderators' time spent weeding out either off-topic or offensive comments in threads attached to any article loosely related to feminism or women's issues. My top five… dystopian novels for teens. Theo James and Shailene Woodley in Divergent. Photograph: Everett Collection/REX.

Mindfulness is all about self-help. It does nothing to change an unjust world. Most of what is wrong in the modern world can be cured by not thinking too much. From psoriasis to depression to giving yourself a "competitive advantage" in the workplace, the answer touted everywhere right now is mindfulness. Just let go for few minutes a day, breathe, observe your thoughts as ripples across a pond, feel every sensation around you. Stop your mind whirring and, lo, miraculously, everything will improve "at a cellular level". Ben Jennings on the centenary of the first world war – cartoon.

At the age of 21 Pattaramon Chanbua already has two children, aged six and three. She works on a food stall in a small seaside town south-east of Bangkok. It is an extremely hard existence. When offered A$16,000 (£9,000) to become a surrogate mother for an Australian couple she saw a way out: “The money that was offered was a lot for me. In my mind, with that money, one, we can educate my children; two, we can repay our debt.” We only know about her because of a baby boy called Gammy, one of the twins she gave birth to seven months ago. Melvyn Bragg's Radical Lives review – a Chaucerian delight. Melvyn Bragg at Tower Bridge on his journey through the life of John Ball. Photograph: Directors Cut Productions/Lauren Jacobs.

The death of privacy. From private passions to sexting: how Britain's sex life has gone public. Roxane Gay: meet the bad feminist. Twenty years ago, when Roxane Gay was 19, she disappeared. She was studying at Yale, at the start of a new term, and instead boarded a plane to San Francisco, where she had arranged to meet a man she had befriended online.

We must not look away from the crises in Africa. Bestselling ghostwriter reveals the secret world of the author for hire. "Behind the title of ghostwriter, I could converse with kings and billionaires as easily as whores and the homeless, go backstage with rock stars and actors. I could stick my nose into everyone else's business and ask all the impertinent questions I wanted to. How much is white privilege worth? Ask the woman crowdfunding it. There are as many atheisms as there are gods. There are as many atheisms as there are gods. Most online commenters are men, so my advice to other women is: join in. A recent study showed that out of 115 letters sent in to the Financial Times in just under a month, only three were written by women. The tech utopia nobody wants: why the world nerds are creating will be awful.

Loneliness: a silent plague that is hurting young people most. King's College London: world leaders in business nonsense. Mood swings? It might be more than PMS… From prey to predator: how I got justice after sexual assault. Men aren’t entitled to women's time or affection. But it's a hard lesson to learn. No, I won't watch that cringe-inducing viral video. I'm a better person than you.

Why the modern bathroom is a wasteful, unhealthy design. My son, 38, can't find a partner. Why I'd like to be … Hugo Weaving in The Matrix. Treasury has not signed off on Duncan Smith's universal credit, MPs told. This is thrilling life-extension news – for dictators and the ultra-rich. Virginity for sale: inside Cambodia's shocking trade. The right to be forgotten will turn the internet into a work of fiction. You can tell the nature of the Tory party by the company it keeps. Caitlin Moran: my sex quest years.

No regrets, say the Chinese women who chose independence over marriage. Where do atheists live? Maps that show the UK's most 'godless' cities. Dan Savage on gender politics: 'We all get to stand up and scream and yell' The Nudie Tee: the new embodiment of sexism in sport. The radicalisation of Samantha Lewthwaite, the Aylesbury schoolgirl who became the 'white widow' Beauty for darker skins: readers' questions answered. Silicon Valley's culture of failure … and 'the walking dead' it leaves behind. Should children's books have a happy ending? JG Ballard's daughter on the mother who could never be mentioned. The end of the hipster: how flat caps and beards stopped being so cool. Loneliness is one thing. A happy loner quite another. The dolphin who loved me: the Nasa-funded project that went wrong.

Does getting a 2:2 degree hinder your career? Beware nostalgia – it's holding you back from the rest of your life. The terrifying rise of Isis: $2bn in loot, online killings and an army on the run. How to mend ... a slow computer. Fruitvale Station's Michael B Jordan: 'African-Americans aren't allowed to be real people' Belle shows that at last, cinema is catching up with black history.