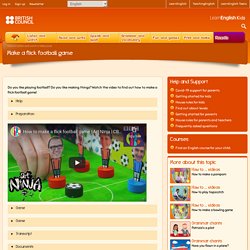 Got an old pizza box here. And it's gonna become my pitch. You need some grass on it. So I'm gonna squeeze out some light green and a little bit of dark green and I'm gonna paint it onto the cardboard using a sponge. The sponge is giving the cardboard a lovely grassy texture. I need for that to dry, but I'm gonna use my ninja skills. Finished all my banners – now I need to make some goals. Ninja skills. Now I've got the pitch, I need to make the players. The red ninja shirt. Now for the base I'm using an old bottle top and I'm gonna weight it with some modelling clay. So now I've got a whole squad ... including my mystery football-playing girlfriend.

So, Michelle, you're in goal. And the great thing about this game is when you reach full time you can tidy it away. Game On! The 10 Best Online Games to Practice English. Online games to practice English changed everything for a friend of mine. Tell me if this sounds familiar. My friend just couldn’t get anywhere with English class. He’s a French speaker from Canada and was studying English as a second language in school. It seemed like no matter how many times he reviewed his notes and did his homework, he wasn’t able to improve. Eventually, he stopped spending so much time studying English and just started playing online English games instead. Many English learners have had this experience.

The good news is that playing ESL games turned out to be the best choice my friend could’ve made for his language skills. As he played, he’d spend hours using English to talk to his teammates and opponents in the game. After a short while, he was using English confidently and more naturally. Games Zone - online English language games (learn English through games) 5 Minute Guide to Kahoot. Teenagers: Games. Games make us laugh. 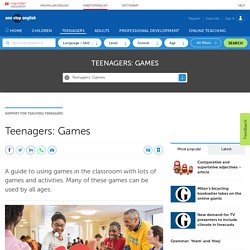 We all like to laugh. Pleasure is very motivating. Laughter makes us more awake and relaxed – and not only I say so, so does the Department of Cognitive Psychology, University College, London. Laughter raises blood pressure just long enough to increase oxygen and blood supply to tissues. It alters the breathing cycle so that more oxygen is inhaled and carbon dioxide exhaled. There’s a game there Many activities can be made into games by making them competitive. The games Not all may be suitable with all ages, especially with the under eight year olds. The Monster Guide to Halloween Teaching Ideas – Genki English. I held off until October first to bring you this this year … 🙂 And a huge thank you to all of you who became VIP members this week, enjoy what I’ve got for you! 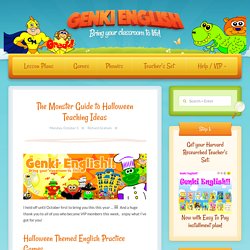 Halloween Themed English Practice Games These games you can use for just about any English vocab or grammar point you wish to teach. Top Halloween Songs & Full Lessons One of the easiest holidays to teach to kids is Halloween as there are so many great games that you can play. But why stop at monsters and trick or treat? New Little Red Riding Hood at Grandma’s House What do you want to be for Halloween? 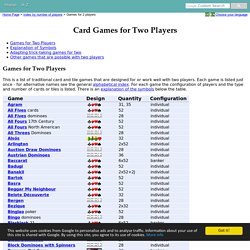 Each game is listed just once - for alternative names see the general alphabetical index. For each game the configuration of players and the type and number of cards or tiles is listed. There is an explanation of the symbols below the table. Explanation of symbols Configuration. Card Games for Two Players. How to Set Up Double Solitaire: Shuffle the cards thoroughly. 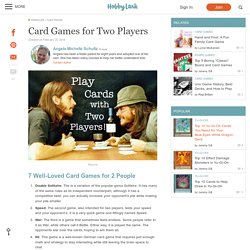 Some players believe that in order to do this well, you must shuffle seven times because it makes the cards completely random. Once shuffled, place four cards in the center of the play area face-up, each card separate from the others. Then deal out the remainder of the cards one-by-one until all cards are doled out.

The dealer should let their opponent choose which stack they would like. The dealer keeps the remainder. Object of Game: The object of Double Solitaire is to be the first person to run out of cards. The center cards are not the only cards you can add to. How To Play Double Solitaire As with most card games, whoever deals allows the other person to go first. Player 1: Begin by looking to see if any of the four cards in the center can be played, whether as an ace that needs to start one of the side stacks or a red jack that can be set on a black queen, etc.