If there are two kinds of people in fashion, which are you? Kate Moss Style & Fashion Tip, Advice 2012. 12 March 2012 Ella Alexander KATE MOSS says that what she wears depends on what mood she's in. 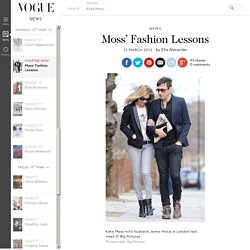 "I just throw on whatever I feel like wearing at the time, which tends to come from the palette of black, grey or red," explained Moss. "If I'm having an off-day I'll wear full black. " Her husband, Jamie Hince, may have said recently he feels a little "awkward" at fashion shows, but he's not too scared to impart his style advice to his wife.

"I don't have any strict rules, but my husband does say not to wear a hat with glasses because I look as if I'm trying to wear a disguise," she told the Sunday Telegraph, before adding, "I always have a pair of Ray-Bans in my bag and lots of pairs at home because they always seem to go missing.

The supermodel has hit headlines this morning for reasons other than her iconic style, with former Daily Mirror editor Piers Morgan offering his negative views on the London-born beauty. "I looked at her and said, 'Kate, why are you kicking me? ' Suki Waterhouse reveals her thoughts on the 'brutal' modelling industry and being called fat - News - Fashion - The Independent. In an interview with Style magazine, the 23 year-old British model opens up about what its really like to work in the fashion industry, describing modelling as "brutal. 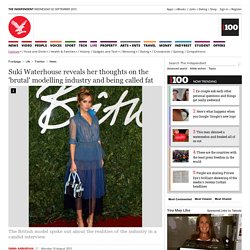 " "It's really hard being told, 'You're too fat.' I remember the first time, I was like 'Bwuh-huh-huh'" she says. But luckily the pressure never effected Waterhouse, who dated Hollywood actor Bradley Cooper for 2 years. "The good thing for me is that it didn't actually make me do anything about it" she asserts. "It's not that you think you're overweight, or they are saying you are a fat person. Loading gallery Exclusive photshoot: Suki Waterhouse in 2012 Waterhouse has been modelling since the age of 16.

Recently Waterhouse has broadened her interests into the world of film appearing in the latest Divergent series sequel and has landed a role in an upcoming film alongside Keanu Reeves and Jim Carrey. How Kim Kardashian Is Changing the Fashion Industry. In a year of embarrassing missteps by fashion publications (among them, Marie Claire’s discovering cornrows in the form of Kendall Jenner’s “bold braids” and Elle‘s discovery of Timberland boots), the most memorable was Vogue‘s discovery of the female derriere. 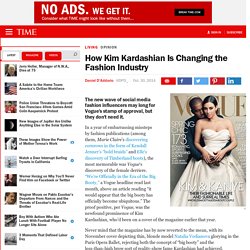 “We’re Officially in the Era of the Big Booty,” a Vogue headline read last month, above an article reading “it would appear that the big booty has officially become ubiquitous.” The proof positive, per Vogue, was the newfound prominence of Kim Kardashian, who’d been on a cover of the magazine earlier that year. Never mind that the magazine has by now reverted to the mean, with its November cover depicting thin, blonde model Natalia Vodianova glorying in the Paris Opera Ballet, rejecting both the concept of “big booty” and the less-than-high brow sort of reality-show fame Kardashian had achieved. But the Vodianova cover feels like something from a different, less interesting era, while the Kardashian one feels au courant. The 25 most powerful people in fashion. Madonna's tour costume designers revealed - News - Fashion - The Independent.

Ahead of her upcoming Rebel Heart tour it's been revealed which designers have the privilege of dressing the star, and the list is an eclectic one. 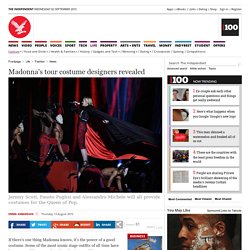 A collaboration with Jeremy Scott for Moschino is no surprise given the pair have worked together numerous times including at this year's Met Gala and in the recent "Bitch I'm Madonna" music video. Fausto Puglisi is another designer who has a history of collaborations with the star creating numerous costumes for her. More surprising is that Gucci's Alessandro Michele is included on that list. Michele's quieter take on luxury has transformed the house but whether it's a match for the big, brash stage presence of Madge is another question entirely.

Loading gallery In pictures: Famous wardrobe malfunctions 1 of 10 Madonna has already let her followers in on a sneak peek of what's to come from a Gucci costume, sharing an image of a multi-colour gown being fitted.