Use systems and shortcuts. How To Use Ink: Your Mac’s Built-In Handwriting Recognition Feature. Chances are pretty good that up until now, you had no idea that there is a built-in application on Macs that is capable of pretty decent handwriting recognition. 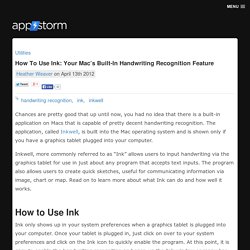 The application, called Inkwell, is built into the Mac operating system and is shown only if you have a graphics tablet plugged into your computer. Inkwell, more commonly referred to as “Ink” allows users to input handwriting via the graphics tablet for use in just about any program that accepts text inputs. The program also allows users to create quick sketches, useful for communicating information via image, chart or map. Read on to learn more about what Ink can do and how well it works. How to Use Ink Ink only shows up in your system preferences when a graphics tablet is plugged into your computer. The general application settings found in system preferences. Tip: Make sure the “write anywhere” or “allow me to ink in any application” option is selected or the program is limited to use of the popup window.

Advanced Features. How to Theme any CMS Using Firebug (and MediaWiki as an Example) Often in my career as a web ninja, I've been asked to skin or theme open source projects to bring them in line with my clients brand. 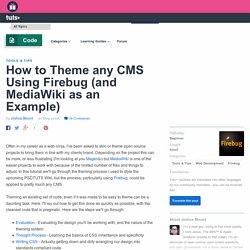 Depending on the project this can be more, or less frustrating (I'm looking at you Magento) but MediaWiki is one of the easier projects to work with because of the limited number of files and things to adjust. In this tutorial we'll go through the theming process I used to style the upcoming PSDTUTS Wiki, but the process, particularly using Firebug, could be applied to pretty much any CMS. Theming an existing set of code, even if it was made to be easy to theme can be a daunting task. Here, I'll lay out how to get this done as quickly as possible, with the cleanest code that is pragmatic. Here are the steps we'll go through: So a quick word on the project. The first thing to do when theming any third party project is evaluate how much work is needed by taking a look at the directory structure. Easily done! Easier said than done eh? How to Use Parallel Construction Correctly. 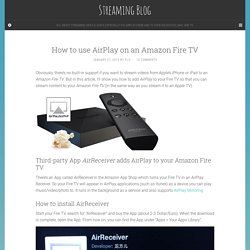 But in this article, I’ll show you how to add AirPlay to your Fire TV so that you can stream content to your Amazon Fire TV (in the same way as you stream it to an Apple TV). Third-party App AirReceiver adds AirPlay to your Amazon Fire TV There’s an App called AirReceiver in the Amazon App Shop which turns your Fire TV in an AirPlay Receiver. So your Fire TV will appear in AirPlay applications (such as itunes) as a device you can play music/video/photo to. It runs in the background as a service and also supports AirPlay Mirroring How to install AirReceiver Start your Fire TV, search for “AirReceiver” and buy the App (about 2-3 Dollar/Euro). Setup AirReceiver Basically, the App is just a set of settings and runs in the background. Change the Device name of your Fire TV There are also some more options (like AirPlay Password, AirTunes latency, resolution, orientation). Summary. A Beginner’s Guide to Using WordPress - Tuts+ Course. Useful HTML Entities · mcdlr. Useful Resources. 5 Effective CSS Preprocessors to choose from for your next website project With all the hype that has been created by the CSS preprocessors, it isn’t surprising to find web developers who are using them for speeding up their web development cycle. 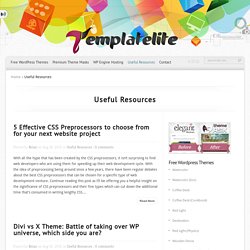 With the idea of preprocessing being around since a few years, there have been regular debates about the best CSS preprocessors that can be chosen for a specific type of web development venture. Continue reading this post as I’ll be offering you a helpful insight on the significance of CSS preprocessors and their five types which can cut down the additional time that’s consumed in writing lengthy CSS.... Read More Divi vs X Theme: Battle of taking over WP universe, which side you are? Choosing a perfect theme for your WordPress website could be a tedious task, especially when you have unlimited options but not sure which one would be the perfect one for your website. Using Dropmark: Collaborative playlists with SoundCloud.

Dropmark can handle pretty much any type of media. 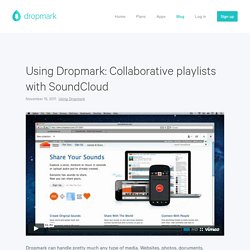 Websites, photos, documents, text… But things get interesting when you add audio and video to the mix. 30+ Apps That Use Your Mac Hardware in Unique Ways. Did you know your MacBook Pro has a motion sensor? 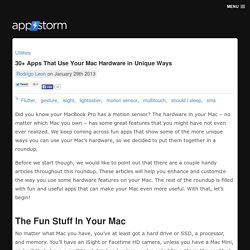 The hardware in your Mac – no matter which Mac you own – has some great features that you might have not even ever realized. We keep coming across fun apps that show some of the more unique ways you can use your Mac’s hardware, so we decided to put them together in a roundup. Before we start though, we would like to point out that there are a couple handy articles throughout this roundup. These articles will help you enhance and customize the way you use some hardware features on your Mac. The rest of the roundup is filled with fun and useful apps that can make your Mac even more useful. How to use Facebook profile pictures for your iOS contacts. I have dozens of contacts in my iPhone that don’t have a picture attached to them. 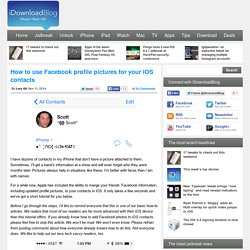 Sometimes, I’ll get a band’s information at a show and will even forget who they were months later. Pictures always help in situations like these. I’m better with faces than I am with names. For a while now, Apple has included the ability to merge your friends’ Facebook information, including updated profile pictures, to your contacts in iOS. It only takes a few seconds and we’ve got a short tutorial for you below. Before I go through the steps, I’d like to remind everyone that this is one of our basic how-to articles. The steps below will add all of your Facebook contacts into your iOS Contacts apps.