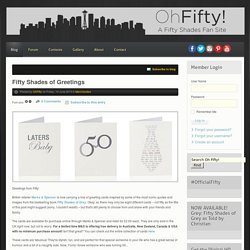 British retailer Marks & Spencer is now carrying a line of greeting cards inspired by some of the most iconic quotes and images from the bestselling book Fifty Shades of Grey. Okay, so there may only be eight different cards – not fifty as the title of this post might suggest (sorry, I couldn't resist!) – but that's still plenty to choose from and share with your friends and family. The cards are available for purchase online through Marks & Spencer and retail for £2.00 each. They are only sold in the UK right now, but not to worry. These cards are fabulous! Fanfic: Fifty Shades of Taylor Ch 1, Fifty Shades Trilogy. This story is based on the wonderful characters created by E. 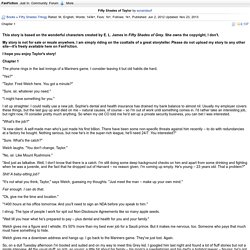 L. James in Fifty Shades of Grey. She owns the copyright, I don't. My story is not for sale or resale anywhere, I am simply riding on the coattails of a great storyteller. Please do not upload my story to any other site—it's freely available here on FanFiction. I hope you enjoy Taylor's story! Chapter 1 The phone rings in the last innings of a Mariners game. "Yes? " "Taylor. "Sure, sir, whatever you need. " "I might have something for you. " I sit up straighter. "What's the job? " "A new client. 50 Shades of Grey – Chapter Seven.

2 Comments Posted on October 10, 2012 This is it guys: we’re going to see inside Christian Grey’s ‘playroom’. 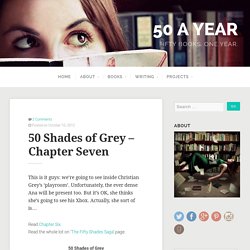 Unfortunately, the ever dense Ana will be present too. But it’s OK, she thinks she’s going to see his Xbox. Actually, she sort of is… Read Chapter Six. 50 Shades of Grey Chapter Seven The first thing I notice is the smell… Yep. …leather, wood, polish … It’s very pleasant. I don’t think ‘pleasant’ is what he’s going for.

The walls and ceiling are deep, dark burgundy, giving a womb-like effect… EL James’ imagery is as subtle as ever. I will summarise: there is big X-shaped piece of wood with handcuffs on each strut, an iron grid hanging from the ceiling covered with dangling chains, and a couple of carefully laid out racks of sex toys. But what dominates the room is a bed. … There is no bedding … just a mattress covered in red leather and red satin cushions… The man has scatter cushions in his sex room. Damn it, now she’s critiquing herself.

His love interest, Anastasia, didn't stand a chance and at one point even describes him as "sex on legs". The bestselling book was loaded with some hot dialogue, and the majority of it came from him. Let's take a look at ten of the sexiest quotes that Mr. Christian Grey. Christian Trevelyan Grey is the male protagonist of the trilogy and Anastasia's love interest. 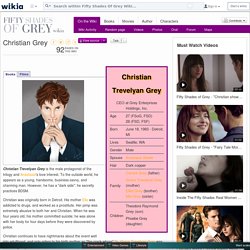 To the outside world, he appears as a young, handsome, business-savvy, and charming man. However, he has a "dark side": he secretly practices BDSM. Christian was originally born in Detroit. His mother Ella was addicted to drugs, and worked as a prostitute. Her pimp was extremely abusive to both her and Christian. Christian continues to have nightmares about the event well into adulthood, and only refers to his birth mother as "the crack whore".Dr. The Greys moved to Seattle at some point during Christian's childhood, and Mia Grey was adopted shortly thereafter. As an adolescent, Christian had violent mood swings that often got him into fights, and secretly drank alcohol. Elena seduced him, and he ended up losing his virginity to her.

After two years, he dropped out to start his own business. Appearance. Fifty Shades of Grey™ Fine Jewelry.