Sebastian Thrun's Homepage. A graphic explanation of the Bayes Theorem. I enjoyed how the 3.16 section of the Stanford Artificial Intelligence class presented the Bayes theorem. 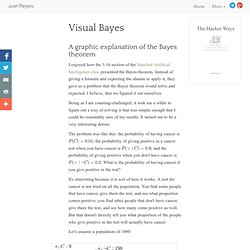 Instead of giving a formula and expecting the alumni to apply it, they gave us a problem that the Bayes theorem would solve and expected, I believe, that we figured it out ourselves. Amit’s Game Programming Information. What’s on this page? 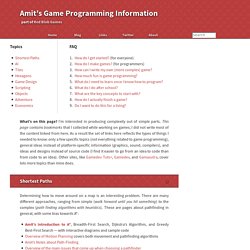 I’m interested in producing complexity out of simple parts. This page contains bookmarks that I collected while working on games; I did not write most of the content linked from here. As a result the set of links here reflects the types of things I needed to know: only a few specific topics (not everything related to game programming), general ideas instead of platform-specific information (graphics, sound, compilers), and ideas and designs instead of source code (I find it easier to go from an idea to code than from code to an idea). Other sites, like Gamedev Tuts+, Gamedev, and Gamasutra, cover lots more topics than mine does. Determining how to move around on a map is an interesting problem. 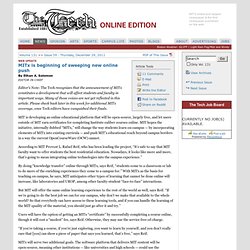 Google Developers Day US - Theorizing from Data. What Can We Learn From Stanford University’s Free Online Computer Science Courses? At the end of July 2011, Stanford University announced that three introductory one-term undergraduate courses would be available free as online distance learning courses during the October to December 2011 term. 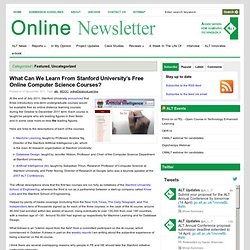 Each course is taught be people who are leading figures in their fields, and in some case more-or-less the leading figures. Here are links to the descriptions of each of the courses: Machine Learning, taught by Professor Andrew Ng, Director of the Stanford Artificial Intelligence Lab, which is the main AI research organisation at Stanford University;Database Design, taught by Jennifer Widom, Professor and Chair of the Computer Science Department at Stanford University;Artificial Intelligence (AI), taught by Sebastian Thrun, Research Professor of Computer Science at Stanford University, and Peter Norvig, Director of Research at Google (who was a keynote speaker at the 2007 ALT Conference). Bayesian Networks without Tears. Teaching the On-Line Stanford class at UMass Lowell: Guest Post from Fred Martin. 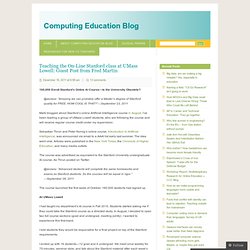 @aiclass: “Amazing we can probably offer a Master’s degree of Stanford quality for FREE. HOW COOL IS THAT?” —September 23, 2011 Mark blogged about Stanford’s online Artificial Intelligence course in August. Sebastian Thrun and Peter Norvig’s online course, Introduction to Artificial Intelligence, was announced via email to a AAAI list early last summer. Game Theory 101: Game Theory Made Easy. Beauty and the Geek Game Theory: Answering the Freakonomics Challenge. In the August 15, 2008 Freakonomics Blog entry, guest author Alon Nir poses the question of determining the best strategy for the game Beauty and the Geek, as seen on TV. 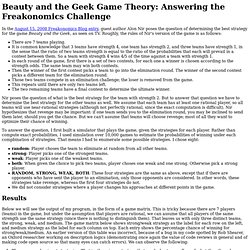 Roughly, the rules of Nir's version of the game is as follows: There are 7 teams playing. It is common knowledge that 3 teams have strength 4, one team has strength 2, and three teams have strength 1, in the sense that the ratio of two teams strength is equal to the ratio of the probabilities that each will prevail in a contest between them. So a team with strength 4 wins 4/5 of the time against a team with strength 1. In each round of the game, first there is a set of two contests, for each one a winner is chosen according to the strength odds. The same team may win both contests. Nir poses the question of what is the best strategy for the team with strength 2. To answer the question, I first built a simulator that plays the game, given the strategies for each player. Results. Apples, screwdrivers and desks: a comparative review of three Stanford free online computer science courses. 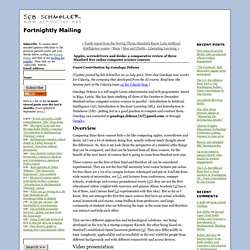 Note that Gundega now works for Udacity, the company that developed from the AI course. Read how she became part of the Udacity team on the Udacity blog.] Gundega Dekena is a self taught Linux administrator and web programmer, based in Riga, Latvia. She has been studying all three of the October to December Stanford online computer science courses in parallel - Introduction to Artificial Intelligence (AI), Introduction to Machine Learning (ML), and Introduction to Databases (DB) - putting her in a good position to compare and contrast them. Overview. Data-driven Visual Similarity for Cross-domain Image Matching. Presented at SIGGRAPH Asia, 2011 People A data-driven technique to find visual similarity which does not depend on any particular image domain or feature representation. 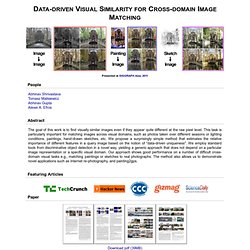 Visit the webpage to see some cool results and applications. Abstract The goal of this work is to find visually similar images even if they appear quite different at the raw pixel level. Featuring Articles Paper Supplementary Material. Unsupervised Feature Learning and Deep Learning. Bayes Theorem: Key to the Universe, Richard Carrier Skepticon 4. Stanford-courses/ AI-Class subs browser. Www.oursland.net/projects/particlefilter/ I wrote this applet to explore how particle filters work -- partially in an effort to improve my FastSLAM implementation and partially for another project I am working on. 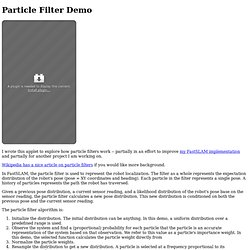 Wikipedia has a nice article on particle filters if you would like more background. Machine Learning. Machine learning is the science of getting computers to act without being explicitly programmed. 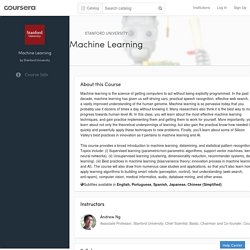 In the past decade, machine learning has given us self-driving cars, practical speech recognition, effective web search, and a vastly improved understanding of the human genome. Machine learning is so pervasive today that you probably use it dozens of times a day without knowing it. Many researchers also think it is the best way to make progress towards human-level AI. In this class, you will learn about the most effective machine learning techniques, and gain practice implementing them and getting them to work for yourself. Intro to AI - Announcements. Students.cs.byu.edu/~cs470ta/goodrich/fall2006/lectures/ParticleFilterTutorial.pdf.