Bionic Lens Implant Delivers Vision 3x Better Than 20/20. Wearing corrective eye glasses could soon be a thing of the past. 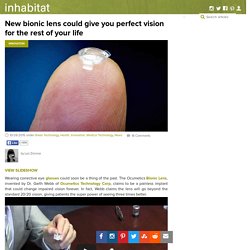 The Ocumetics Bionic Lens, invented by Dr. Garth Webb of Ocumetics Technology Corp, claims to be a painless implant that could change impaired vision forever. In fact, Webb claims the lens will go beyond the standard 20/20 vision, giving patients the super power of seeing three times better. Presented earlier this year at a cataract and refractive surgery conference, the Ocumetic Bionic Lens was created after eight years of research and experimentation. The project itself has cost a whopping $3 million in funding for research, international patents, and trials.

Related: Australian Research Group Announces First Implantation of a Bionic Eye Instead of working like a contact lens, the Bionic Lens acts similarly to cataract surgery, adhering to the eye’s natural lens. Patients with the bionic lens implanted would be safeguarded against cataracts in the future, strengthening the eye’s natural lens which is prone to decay. 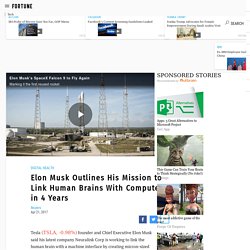 Neuralink is aiming to bring to the market a product that helps with certain severe brain injuries due to stroke, cancer lesion, etc, in about four years, Musk said in an interview with website Wait But Why. "If I were to communicate a concept to you, you would essentially engage in consensual telepathy," Musk said in the interview published on Thursday. Click here to subscribe to Brainstorm Health Daily, our brand new newsletter about health innovations. Artificial intelligence and machine learning will create computers so sophisticated and godlike that humans will need to implant "neural laces" in their brains to keep up, Musk said in a tech conference last year. "If you have two brain interfaces, you could actually do an uncompressed direct conceptual communication with another person. " Smartphone App Translate Your Thoughts into Audible Words.

In Brief New technology enables thought to be translated into audible words with surprising accuracy by reading user's brainwaves.The developers say they might be able to get the device to work with smartphones via an app in just five years. 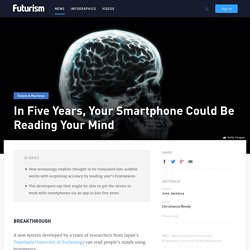 Breakthrough. 50% of Americans Have Chip Implants. Tech Get short URL Last week it emerged that US naval officers have held discussions with Zoltan Istvan of the Transhumanist political party, who is also running as a candidate for the US presidency. 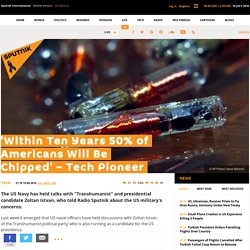 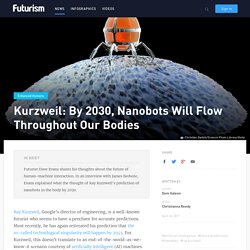 In an interview with James Bedsole, Evans explained what the thought of Ray Kurzweil's prediction of nanobots in the body by 2030. Ray Kurzweil, Google’s director of engineering, is a well-known futurist who seems to have a penchant for accurate predictions. Most recently, he has again reiterated his prediction that the so-called technological singularity will happen by 2045. For Kurzweil, this doesn’t translate to an end-of-the-world-as-we-know-it scenario courtesy of artificially intelligent (AI) machines. 'Brain to Cloud' Interface Trialled.

If futurist, inventor, and Google executive Ray Kurzweil is right about the future, we’ll all be augmenting our brains with extra capacity in the cloud at some point in the future. 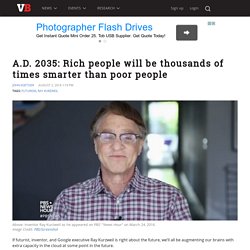 Which sounds exciting, even if a little frightening. But this very advance could also pave the way for the rich to become thousands of times smarter than poor people, which would likely permanently solidify and even exacerbate current socioeconomic stratifications. I asked Kurzweil if he saw that consequence as a possibility, and he strongly disagreed. Here’s why I think he might be right about the technology, but wrong about the impact. People Routinely Using Thought to Control Technology. Shutterstock The world is going to be a very different place in 2045.

Predicting the future is fraught with challenges, but when it comes to technological advances and forward thinking, experts working at the Pentagon's research agency may be the best people to ask. Launched in 1958, the Defense Advanced Research Projects Agency is behind some of the biggest innovations in the military — many of which have crossed over to the civilian technology market.

These include things like advanced robotics, global positioning systems, and the Internet. So what's going to happen in 2045? It's pretty likely that robots and artificial technology are going to transform a bunch of industries, drone aircraft will continue their leap from the military to the civilian market, and self-driving cars will make your commute a lot more bearable.

But DARPA scientists have even bigger ideas. Dr. Singularity Occurs. Robots ‘will reach human intelligence by 2029 and life as we know it will end in 2045’. 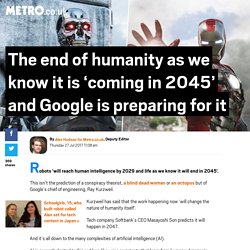 This isn’t the prediction of a conspiracy theorist, a blind dead woman or an octopus but of Google’s chief of engineering, Ray Kurzweil. Schoolgirls, 15, who built robot called Alan set for tech contest in Japan Kurzweil has said that the work happening now ‘will change the nature of humanity itself’. Tech company Softbank’s CEO Masayoshi Son predicts it will happen in 2047.