Reforestation Drones Can Plant 100K Trees In An Hour. Via BioCarbon Engineering Sure, it’ll be great when a drone can drop off your Amazon Prime goodies or 7-Eleven snacks just minutes after you order them… but it’ll be even better when they help regrow millions of trees. 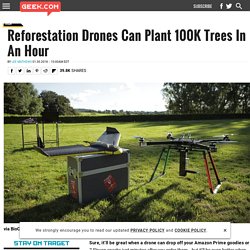 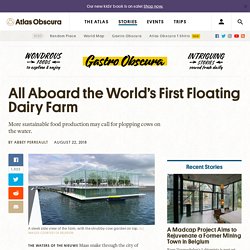 It may sound like science fiction, but the world’s first floating dairy farm, the brainchild of Dutch property development company Beladon, is well on its way to becoming a reality. Though the project has been in the works for years, the farm only recently got the green light for construction. Earlier in the summer, a giant, 900-ton concrete platform was lugged by barge from the north of the Netherlands to its current post in Rotterdam’s Merwehaven harbor. It might not look like much yet, but, according to Peter and Minke van Wingerden, co-owners of Beladon, it will soon be a multi-level, hi-tech home to 40 Meuse Rhine Issel cows—and perhaps the best bovine real estate on the river. 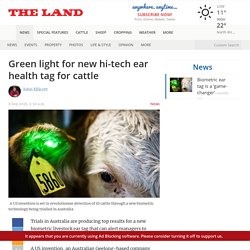 A US invention, an Australian Geelong-based company is trialling the technology in several states. Already the trials are bringing promising results, with the led light technology alerting managers up to seven days earlier than average of cattle sickness, and identifying almost double the number of ill cattle compared to pen riders. In one trial the biometric ear tags identified an extra 25 cattle with lung scores. Wyoming Using Blockchain to Support Beef as Premium Product. Cows are Modeling the Tracking Tech of the Future. Dutch Vivera Claims 'World-First' with Plant-Based Steak. According to commercial director Gert Jan Gombert, the company, which is preparing to manufacture "several million pieces​" of steak in 2018, has achieved a world first. 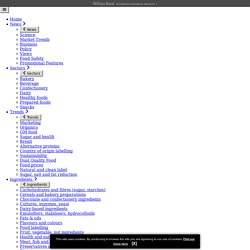 “I do not know of any real plant-based steaks that are on the market yet, I only know of a few that are in the new product development (NPD) phase. So far, nobody else has been able to​ replicate beef steak and so it’s very important to be the first.​ “Steak is the holy grail of plant-based proteins and we worked against the clock to get this to market. It is ground-breaking in terms of animal welfare and sustainability in getting more meat eaters buying plant proteins.”​ Vevira has a portfolio of over 40 products that are sold in 25,000 supermarkets across 23 European countries, with around 40% of the manufacturer’s business coming from private label manufacturing.

Alibaba Pilots Australasian Blockchain Logistics Initiative. Playlist0:00Autoplay: onoffsharefullscreen Alibaba Australia has announced the launch of a pilot that will see orders made through the company's new Food Trust Framework, an initiative that uses blockchain technology, in attempt to improve supply chain traceability. 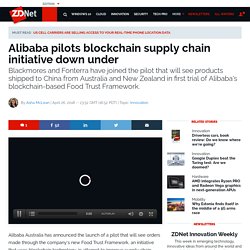 Health supplements company Blackmores and dairy products supplier Fonterra will be the first to trial the Food Trust Framework, shipping products from Australia and New Zealand to China via Alibaba's Tmall Global platform. Alibaba is hopeful that if the pilot taking place in Auckland is successful, the blockchain framework could form the basis of a global supply chain model applied across all of Alibaba Group's ecommerce markets. 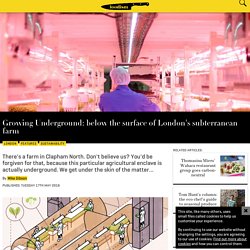 But what if I told you that deep in the bowels of London – underneath the Northern Line, in old air-raid shelter built during World War II – you'd find the possible future of urban farming? The first thing I say when I see it for myself, after some introductions, is probably "How big?! " I'm at Clapham's Growing Underground for a quick nosy, having heard about the operation but deliberately not having done too much homework. As the rickety lift inside its tungsten-drenched headquarters slowly makes its way down to the dark recesses of subterranean London, co-founder Steven Dring tells me that yes, what I'm about to see is a "65,000sq ft hydroponic urban farm", which grows micro greens, salad leaves and herbs under LED lights.

Robotic Bee Takes Flight, To Pollinate (& Possibly Spy) We take for granted the effortless flight of insects, thinking nothing of swatting a pesky fly and crushing its wings. 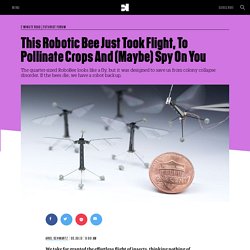 But this insect is a model of complexity. After 12 years of work, researchers at the Harvard School of Engineering and Applied Sciences have succeeded in creating a fly-like robot. And in early May, they announced that their tiny RoboBee (yes, it’s called a RoboBee even though it’s based on the mechanics of a fly) took flight. In the future, that could mean big things for everything from disaster relief to colony collapse disorder.