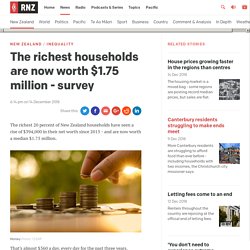 Money Photo: 123RF That's almost $360 a day, every day for the past three years. Yet, while the rich are getting richer, those in the bottom 40 percent have not seen an increase in net worth in three years, from June 2015 to June 2018. With property houses on the rise, the median net worth of a typical Kiwi household is $340,000, up from $289,000 three years ago. Photo: Supplied / Statistics New Zealand "[The top 20 percent of Kiwi households surveyed in the past year] collectively holds about 70 percent of total household net worth.

We've Stagnated for Most of Human History. Here's Proof. Measuring economic growth is difficult, especially for periods for which little information is available. 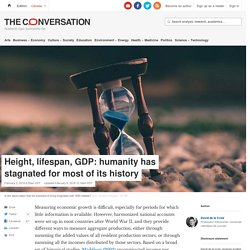 However, harmonized national accounts were set up in most countries after World War II, and they provide different ways to measure aggregate production, either through summing the added values of all resident production sectors, or through summing all the incomes distributed by those sectors. Based on a broad set of historical studies, Maddison (2003) reconstructed income per capita data over the past two centuries, and added some point estimates for earlier periods (in 1 Common Era (CE), 1000 CE, 1500 CE, 1600 CE and 1700 CE).

Such estimates often require educated guesses on unobservable trends, but they nonetheless show the best information given what is known at one point in time. ‘Happiness Fund’ Helps Pay Debts for up to 1.6m Koreans. Image copyright Getty Images South Korea is to write-off the debts of as many as 1.6 million people in a move designed to ease the financial burden on low-income individuals. 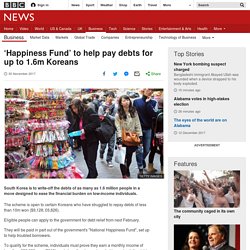 The scheme is open to certain Koreans who have struggled to repay debts of less than 10m won ($9,128; £6,826). Eligible people can apply to the government for debt relief from next February. They will be paid in part out of the government's "National Happiness Fund", set up to help troubled borrowers. To qualify for the scheme, individuals must prove they earn a monthly income of less than 990,000 won ($910), and show they have struggled to pay back the debt for more than a decade. The plan could clear as much as 6.2 trillion won in bad debts. Quebec Offers Basic Income to 84,000 People Unable to Work. Quebecers who have a severely limited capacity to work will gradually be able to access a guaranteed minimum income beginning next year, Premier Philippe Couillard's government announced Sunday. 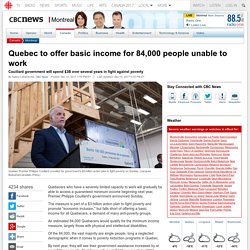 The measure is part of a $3-billion action plan to fight poverty and promote "economic inclusion," but falls short of offering a basic income for all Quebecers, a demand of many anti-poverty groups. An estimated 84,000 Quebecers would qualify for the minimum income measure, largely those with physical and intellectual disabilities. Of the 84,000, the vast majority are single people, long a neglected demographic when it comes to poverty reduction programs in Quebec. By next year, they will see their government assistance increased by at least $73 per month. That figure will reach $440 per month by 2023, bringing their annual guaranteed minimum to $18,029. The Couillard government also plans to table a bill to amend the Social Aid Act in order to guarantee its basic income provisions. More Quebec news: Iwi Wealth Reaches $6bn.

A new report shows Ngāti Whātuā ō Ōrākei and Ngāi Tahu are leading the way in financial performance by iwi. 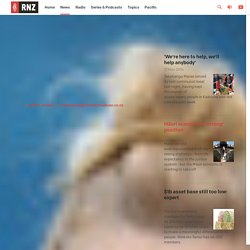 Photo: 123RF And post-settlement entities are now valued at around $6 billion. The annual assessment of eight iwi, carried out by economic analysis firm TDB Advisory, shows Ngāti Whātua ō Ōrākei leading the way with a financial performance that is up by 16 percent. The Auckland-based iwi, which lost all of its land to the Crown apart from the Ōkāhū Bay cemetery, has invested only in property, which has allowed it to concentrate on housing its people. Just four years post settlement the iwi has a number of housing projects up on the hill at Ōrākei accommodating its iwi. It has also invested in health clinics and has future plans in insurance and savings schemes. Productivity & Median Income Diverging Since 1973. From David Ruccio Everyone, it seems, now agrees that there’s a fundamental problem concerning wages and productivity in the United States: since the 1970s, productivity growth has far outpaced the growth in workers’ wages.* Even Larry Summers—who, along with his coauthor Anna Stansbury, presented an analysis of the relationship between pay and productivity last Thursday at a conference on the “Policy Implications of Sustained Low Productivity Growth” sponsored by the Peterson Institute for International Economics. 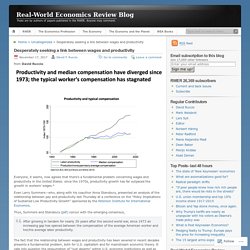 Thus, Summers and Stansbury (pdf) concur with the emerging consensus, After growing in tandem for nearly 30 years after the second world war, since 1973 an increasing gap has opened between the compensation of the average American worker and her/his average labor productivity. The fact that the relationship between wages and productivity has been severed in recent decades presents a fundamental problem, both for U.S. capitalism and for mainstream economic theory.