Blockchain Tech Saving Banks $20bn a Year on Back Office. Blockchain technologies could reduce banks' infrastructural costs by $15-20bn a year by 2022, a new report from Santander InnoVentures claims. 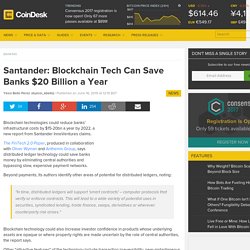 The FinTech 2.0 Paper, produced in collaboration with Oliver Wyman and Anthemis Group, says distributed ledger technology could save banks money by eliminating central authorities and bypassing slow, expensive payment networks. Beyond payments, its authors identify other areas of potential for distributed ledgers, noting: "In time, distributed ledgers will support 'smart contracts' – computer protocols that verify or enforce contracts. This will lead to a wide variety of potential uses in securities, syndicated lending, trade finance, swaps, derivatives or wherever counterparty risk arises. " Blockchain technology could also increase investor confidence in products whose underlying assets are opaque or where property rights are made uncertain by the role of central authorities, the report says.

OECD Formally Phase-Out Cash. Cash could become history within a decade, thanks to new financial instruments, including virtual currencies, some of the world’s leading bankers said during the World Economic Forum on Wednesday (20 January). 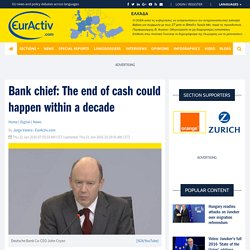 The impact of technology, the overarching theme of this year’s meeting, will be very significant. The evolution would be so significant that John Cryan, co-CEO of Deutsche Bank AG, predicted that, in ten years’ time, “probably” we would not see cash anymore. It is “terribly inefficient”, he added. “Cash should be dematerialized,” he said in a panel on the future of finance- and governments “should be interested” in this process because it would make transitions “more traceable” and would help to combat illegal financing or money laundry. Echoing his prediction, Dan Schulman, the CEO of PayPal, stated that “money is digitizing in front of us”.

Saudi Arabia Showing Signs of Financial Strain. Hundreds of foreign hospital workers in Saudi Arabia, unpaid for seven months, went on strike this week and were blocking a highway in Eastern Province in defiance of the ban on strikes and demonstrations in the Kingdom. 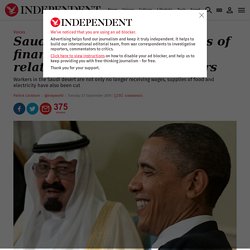 The employees’ anger was deepened by the belief that the same employer who has been holding back their salaries, regularly offers massive fees to attract international singers to perform at his parties. Things are not well in Saudi Arabia and this week there were two pieces of bad news. The Private Debt Crisis. Why does the IMF keep badly missing its global growth forecast? 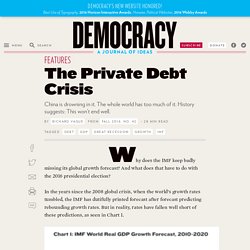 And what does that have to do with the 2016 presidential election? In the years since the 2008 global crisis, when the world’s growth rates tumbled, the IMF has dutifully printed forecast after forecast predicting rebounding growth rates. But in reality, rates have fallen well short of these predictions, as seen in Chart 1. China's $2tn Black Hole Threatens World Economy. Deutsche Bank Shares Fall to Lowest level Since Mid-80's.

Deutsche Bank Is The Greatest Risk To Global Finance. Over three years ago we wrote "At $72.8 Trillion, Presenting The Bank With The Biggest Derivative Exposure In The World" in which we introduced a bank few until then had imagined was the riskiest in the world. 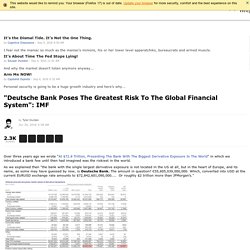 As we explained then "the bank with the single largest derivative exposure is not located in the US at all, but in the heart of Europe, and its name, as some may have guessed by now, is Deutsche Bank. The amount in question? €55,605,039,000,000. Why Are Corporations Hoarding Trillions? Photo There is an economic mystery I’ve been struggling to understand for quite some time, and I’m not the only one who’s confused: Among financial experts, it is often referred to as a conundrum, a paradox, a puzzle. 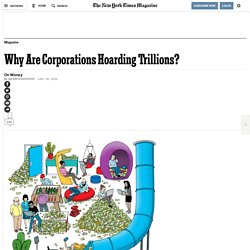 The mystery is as follows: Collectively, American businesses currently have $1.9 trillion in cash, just sitting around. Not only is this state of affairs unparalleled in economic history, but we don’t even have much data to compare it with, because corporations have traditionally been borrowers, not savers.